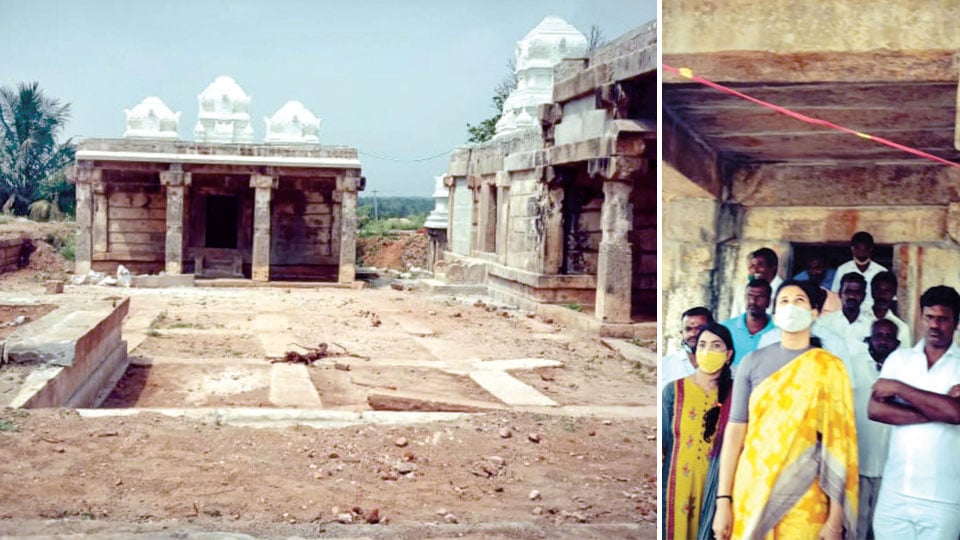 Of the 1,000 pillars of Kashilingeshwara Temple, only 240 pillars remain now

Hunsur (Terikal): The highlight of Mysuru Deputy Commissioner (DC) Rohini Sindhuri’s Terikal village visit was the Thousand-Pillar Kashilingeshwara Temple. According to villagers, the temple dated back to thousands of years and was built by Gangas of Talakad.

Manjunath, a 56-year-old villager told SOM that there is a Vishnu Temple nearby built by Hoysala rulers. “The Kashilingeshwara Temple is dedicated to Lord Veerabhadra. The Temples were demolished by invaders who came from Persia and Afghanistan and the Temples were renovated five to six times by the Maharajas of Mysore,” he said.

Though the Temple is named Thousand-Pillar Kashilingeshwara Temple, there are only 240 pillars now. It had 1,000 pillars before destruction by invaders. “After the Maharajas’ rule, the Temples were neglected and now the Tourism Department has taken up renovation. Due to lack of funds, the renovation as stopped,” villagers said.

“There is a small Chandikeshwara Temple and Pathaleshwara Temple within Kashilingeshwara Temple complex and idols of deities including Shiva, Vishnu, Ganapathi, Lakshmi and Saraswathi can be found inside the Temple. My grandfather used to mention about the giant Rajagopura of the Temple and it has been destroyed by the invaders. In front of Rajagopura there is a 60-ft Garuda Khamba. Even this is missing but we can find the stone lamp that is placed above the Garuda Khamba. The lamp used to be lit earlier,”  Manjunath revealed.

On the 1,000 pillars, Manjunath said that most of the 16-ft pillars and supporting columns were removed and used to build the Hanagodu Katte (barrage). “All the stones were carved from rocks available at Gommatagiri Hill near Mysuru. Two 16-ft pillars were taken away to Mysuru to build the entrance gate of Sri Chamundeshwari Temple atop the Chamundi Hill in Mysuru by the Wadiyars and we can still see the stones there,” he said.

Villagers appealed to the DC to release funds for restoration of temples. The DC directed Departments of Archaeology and Museums and Tourism to prepare a Detailed Project Report and submit to the Government for approval.