Home » Coronavirus Update » COVID on the Rise: Entry into State only for persons with negative COVID report 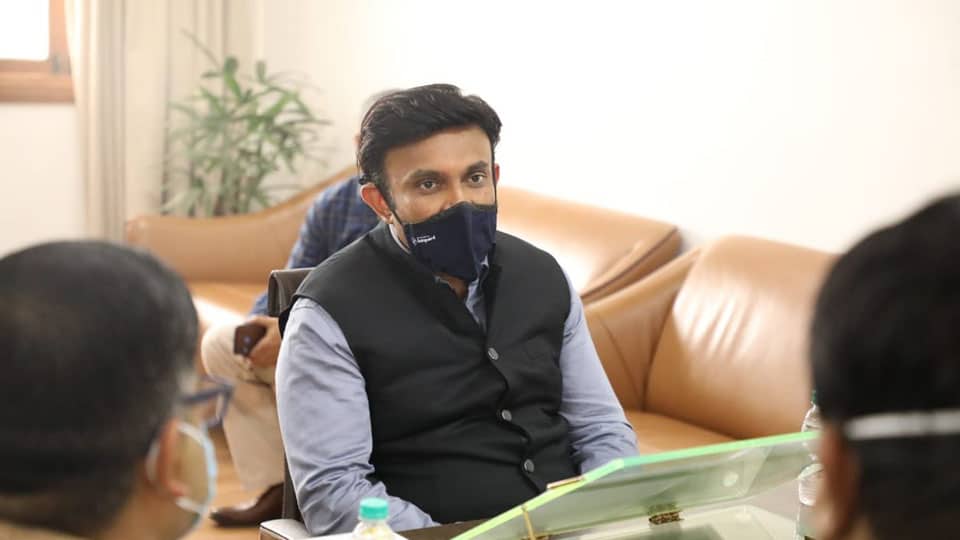 COVID on the Rise: Entry into State only for persons with negative COVID report

Bengaluru/Mysuru: Taking strong note of spurt in COVID-19 cases in neighbouring Kerala and Maharashtra, Health and Medical Education Minister Dr. K. Sudhakar said that people from those two States will be allowed to enter Karnataka only after producing the RT-PCR negative report.

Addressing a news conference in Bengaluru this morning, the Minister said this decision had been taken as per suggestions by COVID-19 Technical Advisory Committee (TAC) headed by Dr. M.K. Sudarshan in the wake of sudden spurt in Corona positive cases in Kerala and Maharashtra. On an average, 5,000 to 6,000 cases were reported from these two States daily. “Health experts have advised people to be careful till March end. They must strictly follow all the safety guidelines in the interest of everyone,” he said.

He said nine districts of Karnataka — Bengaluru, Dakshina Kannada, Udupi, Uttara Kannada, Belagavi, Kodagu, Dharwad, Mysuru and Chamarajanagar — share borders with Kerala and Maharashtra. Through these borders, people from those two States enter Karnataka by road. Hence, they must produce RT-PCR negative report at the border failing which entry would be denied. To implement this rule strictly, co-operation of Revenue and Home Departments was required. A meeting with Home Minister Basavaraj Bommai and Revenue Minister R. Ashok will be held tomorrow to work out separate guidelines for people from these two States. The new rule must be strictly implemented on the borders by the respective Deputy Commissioners (DCs) and Superintendents of Police (SPs).

Dr. Sudhakar said the Government would work out separate guidelines for people arriving in Karnataka Airports from Kerala and Maharashtra. Some airports have made RT-PCR test compulsory on arrival. It would be introduced where test was not done, he added.

No report, no room

Meanwhile, all hotel owners in Mysuru city have been asked to insist on producing latest RT-PCR negative report from Keralites at the time of giving rooms. Those who were having cough and fever must be not only denied rooms but bring it to the notice of District Health Officers for necessary action. If anything goes wrong, owners concerned would be held responsible.  This instruction came from Chief Secretary P. Ravikumar and Additional Chief Secretary (Health) Jawaid Akhtar during a video-conference yesterday with officers of those districts that share borders with Kerala, following spurt in Corona cases.

Sharing details of the meeting with SOM, a senior Health Officer said, Mysuru Deputy Commissioner Rohini Sindhuri was asked to deploy a mobile health team at Bavali check-post, on Mysuru-Kerala border, to conduct random test of people travelling from Kerala. In case of asymptomatic cases, those persons must be subjected to RT-PCR test at nearby Taluk Health Centre. Besides, a Police team must be posted at the check-post to assist the health team.

District Health Department has been asked to keep an eye on nursing students, especially from Kerala, who are studying in various Nursing Colleges in city. Those students have been told to undergo RT-PCR test. Students, who have tested Corona positive, have been subjected to compulsory home quarantine.

Meanwhile, Health and Medical Education Minister Dr. K. Sudhakar has not ruled out lockdown 2.0 in case citizens failed to strictly follow the COVID-19 guidelines. He said thousands of persons from Kerala and Maharashtra come to Karnataka and they can spread the contagion with local people. If people failed to adopt self-discipline, Government may have to gor for lockdown. District Administrations of Mysuru, Kodagu, Chamarajanagar and Dakshina Kannada have been strictly told to step up vigil on Kerala border and prevent entry of pandemic infested people into the State.