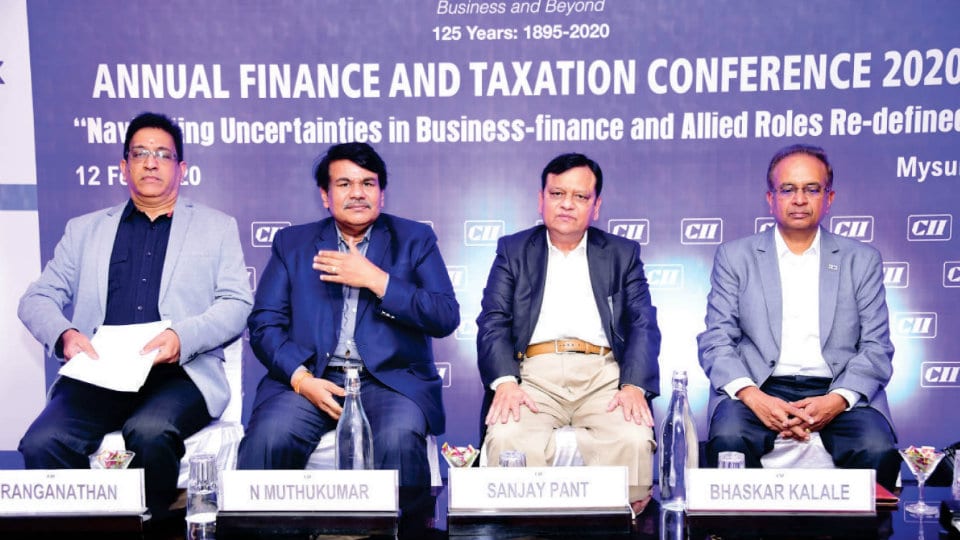 “Mysuru is better than other regions of State in GST collections”

Sanjay Pant, IRS, Principal Commissioner, GST Commissionerate, Mysuru, who was the chief guest, said  “In India we follow not only the Constitution but also the rules and laws laid by it.”

Stating that there is a need to look at the intent of the legislation, he said GST is the outcome of one such legislation.

Collection of GST was pegged at a rate of 10 percent during 2019, he said.

Talking on complexities of GST, he mentioned that in Mysuru Rs. 1,100 crore was raised as GST collection out of which TVS and Automotive Axles alone accounted for more than Rs. 100 crore. The State GST revenue is growing at 9 percent, Sanjay Pant said.

“The growth is due to more tax compliance by the industry and any slow-down in revenue collection and growth, is mainly due to the growing parallel economy. The recent development is ‘Sugam Saral’ from April 2020 which is a step towards merger of the database. In January 2020 alone, the revenue collection has grown at 12 percent against the target. Out of it, 29 percent of the revenue collected is from service tax,” he said and suggested the sectors having potential such as entertainment and tourism to be exploited for growth which will result in increase of revenue collections.

Dr. N. Muthukumar, Past Chairman of CII Karnataka, who also spoke, pointed out that  the Industrial sector of Mysuru is growing significantly contributing to the GDP. Business environment right now is uncertain, complex and volatile. According to him, ‘making money’ is necessary. Because, inclusive growth of economy requires everyone —  the individual, the Industry and the Government — to make money. The awareness of the changes in the Government policies is very necessary for the industry to get the best out of these policies, he said and called upon the industry to have a re-look at the policies.

Bhaskar Kalale, Chairman, CII Mysuru, pointed out that  the conference is the need of the hour and calls for ‘thinking like an economist’. Stating that economics is a science of resources, he gave a call to the industrialists to put a positive spin on the budget and fiscal policies that are framed from time to time.