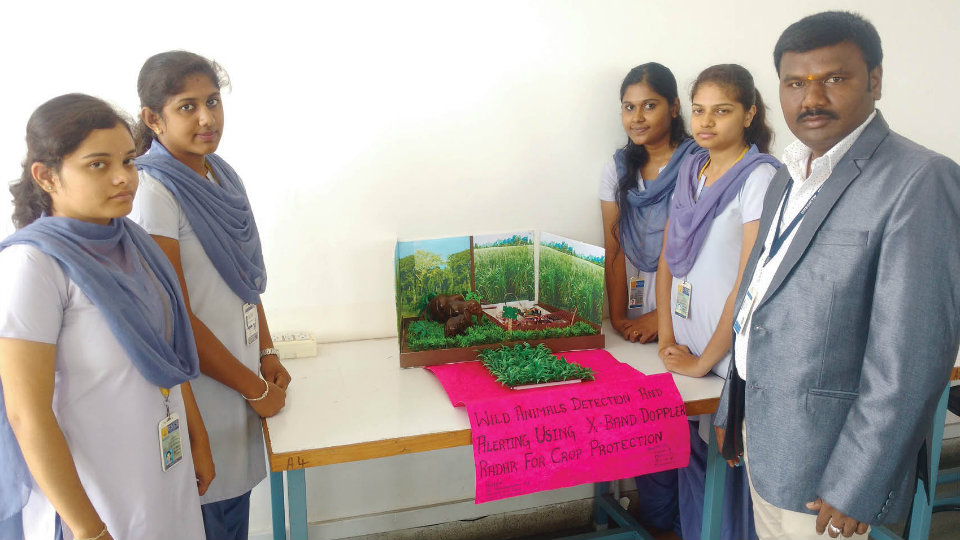 She was all of ten years when she saw her grandfather coming in contact with the electric fence and dying of shock. The dark memory stayed with her for years but she could not imagine that one day she would be doing engineering and motivating her team to take up a project to save lives of farmers from electric shock.

“I come from Amble in T. Narasipur taluk. We have farm land and it is fenced by electric fence to protect the crops from wild animals. I saw my grandfather dying because he was not aware that the power had been switched on by the lineman during the change of shifts. He just touched the wire and died. I shared this experience with my classmates and with the help of our guide we came up with this project titled ‘Wild animal detection and alerting using X-Band Doppler radar for crop protection,’” said M. Manasa, a student of Telecommunication Engineering from GSSS Institute of Engineering and Technology for Women (GSSSIETW), Mysuru, even as her teammates R. Chaitra, K. Sanjana and L. Thejaswini, all students of 8th semester, nod their heads in unison, sharing their experiences with Star of Mysore.

According to a recent research, about 48 per cent of crops are lost due to wild animal attacks on farm fields. Due to this, farmers face lot of problems. In order to overcome this, some old methods like torch lights and lantern, display of dead body parts, mounting of plastic paper on wooded sticks, lighting of fires and tape recorders were used to scare away the wild animals, said Chaitra.

Another method that is widely used in the farm land is the electric fence. “The cost of fencing one acre of land is Rs.20,000. In summer the shocks will be more and in winter it will be less. Not only is this more expensive but most of the farmers cannot afford it. Besides fire hazards are more with electric fence,” said Thejaswini.

“The electric shocks not only result in loss of animal life but also are dangerous to humans. In villages, the power cut timings are introduced like in cities and farmers have a misconception that there will be no power according to the shift power cut, just as Manasa’s grandfather thought and lost his life years ago,” said Sanjana.

If solar fences are used, then during winter times, the charging takes time due to less sunlight. Hence, there is no proper electricity passing through the fence and there will be no electric shock, which renders the solar fences useless, said the students.

Due to deforestation and environmental changes, wild animals are facing scarcity of water and other food items which are driving them to the villages and even cities in search of food. Thus the human-animal conflict began because when the animals migrate they destroy the farms and kill human beings. Hence, electric fencing was one of the ways used to prevent the animals from entering farm lands which has lot of disadvantages.

“Earlier sensors were being used and there are many types of them available. However, instead of sensor we realised that using X-Doppler is far better. This is a unique and simple technology because the components used in X-Band Doppler are to find out the movement and speed of animals. Unlike the electric fence, this is a farmer-friendly instrument. It will cost between Rs.2,500 and Rs.3,000 and every farmer can use it,” said the students. The advantage is that X-Doppler can be sensed by animals and the farmer gets an SMS call alert on his mobile phone. Asked how it works, the students demonstrated with the instrument which is very compact and showed how it catches the movement of the animals and even the human beings.

“In the X-Doppler sensor the frequency and speed of the animal is also displayed. Just one instrument is enough to cover an area of ten acres because it has a 270 degree, that is a ten metre cover. If a very wide area is to be covered then just an extra Doppler is all that is required,” said Chaitra even as the SMS alert came on her mobile phone.

Incidents like the recent shocking news of Senior IFS Officer S. Manikandan being trampled to death by a wild tusker could be avoided if the Forest Department installs this X-Doppler device near a trench and other places. The Doppler provides info regarding the presence of wild animals to the Field or Forest Officers who are on forest patrolling, said the students.

Even sandalwood smuggling can be prevented using this instrument.  The smuggler gang will not know the presence of X-Doppler and the moment they try to enter, the X-Doppler will sense their movements and send an alert signal to the owners or the Forest Department guards. The smugglers unlike the animals cannot sense X-Doppler said the students.

It is useful for visually challenged also as the X-Doppler can be fixed to the stick used by them. If any vehicle passes by, it will alert the person, they said.

“Mysuru-based Schematic Company was involved with us. We have spent about Rs.15,000 to Rs.20,000 for the project. Radar, GSM and buzzer are all that is required for it to be implemented. If any company shows interest in the project to manufacture the component then we are willing to share the idea as it is beneficial, especially to the farmers and the forest staff,” they said.

“The students completed the project in four months and they received Best Project Award. This project was been sponsored by Karnataka State Council for Science and Technology (KSCST), Bengaluru,” said Dr. Parameshachari.