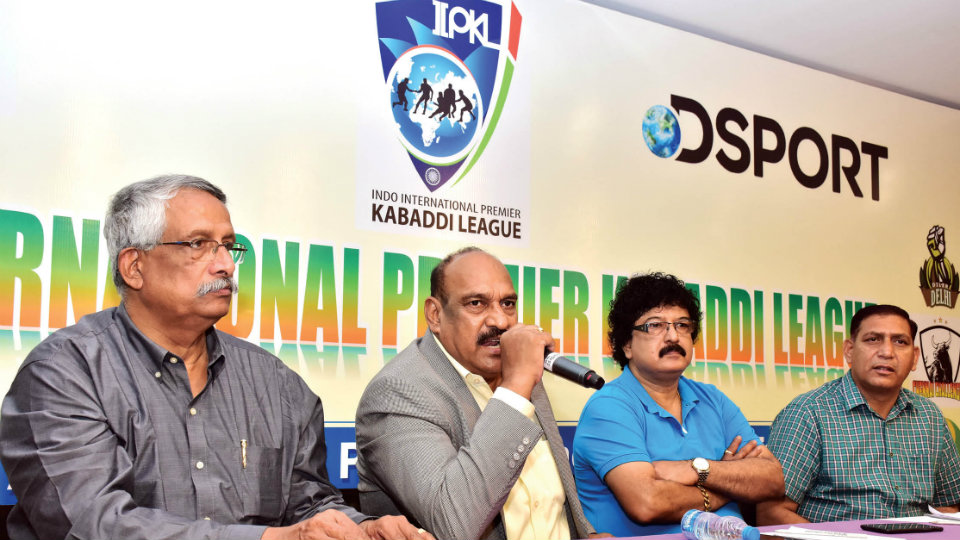 Mysuru to host ten-day Intl. Premier Kabaddi League from May 21

Mysuru: The Indo-International Premier Kabaddi League (IIPKL) organised by New Kabaddi Federation (NFK) will be held from May 13 to June 4 and league matches in second phase will be held in the city from May 21 to 30 at the Chamundi Vihar Stadium, said Federation General Secretary and World Kabaddi Council Vice-President M.V. Prasad Babu.

He was addressing a press conference at a private hotel in city recently and said that the first phase of the league where 20 matches will be played, will be held in Pune at
Balewadi Stadium from May 13 to 20. In the second phase, there will be 17 league matches to be held at Chamundi Vihar Stadium in Mysuru from May 21 to 30, he said. The final seven games will be held in Bengaluru Kanteerava Stadium. There will be a total of 44 matches in season one. Out of the 4,800 players who have registered to play in the IIPKL, 160 players have been selected. A total of 16 foreign players will participate in eight teams, said Babu.

The 8 teams are Bengaluru Rhinos, Chennai Challengers, Telugu Bulls, Pune Pride, Haryana Heroes, Mumbaiche Raje, Dilar Delhi and Pondicherry Predators. Players of the eight teams will be chosen through a lucky dip. Already the players have been classified under A, B, C and D grade. The A grade players will get Rs.10 lakh, B Rs.8 lakh, C Rs.6 lakh and D Rs.8 lakh, he said.

The selected players apart from being paid the player’s fees will get a match amount of 20 percent from the revenue generated from the league. The winner in the league will carry a cash prize of Rs.1.25 crore, the runner-up Rs.75 lakh, the third placed team will get Rs.50 lakh and the fourth placed team Rs.25 lakh. Various sports channels will telecast the matches from 8 pm to 10 pm, he said.

Former International Cricketer Virender Sehwag is the brand ambassador of IIPKL. The matches will be ticketed events and it has been decided to price each ticket between Rs.200 to Rs.300. Out of profit made in the first phase of the league 10 percent will be contributed to the families of the Pulwama martyrs. – M.V. Prasad Babu, General Secretary, NKF