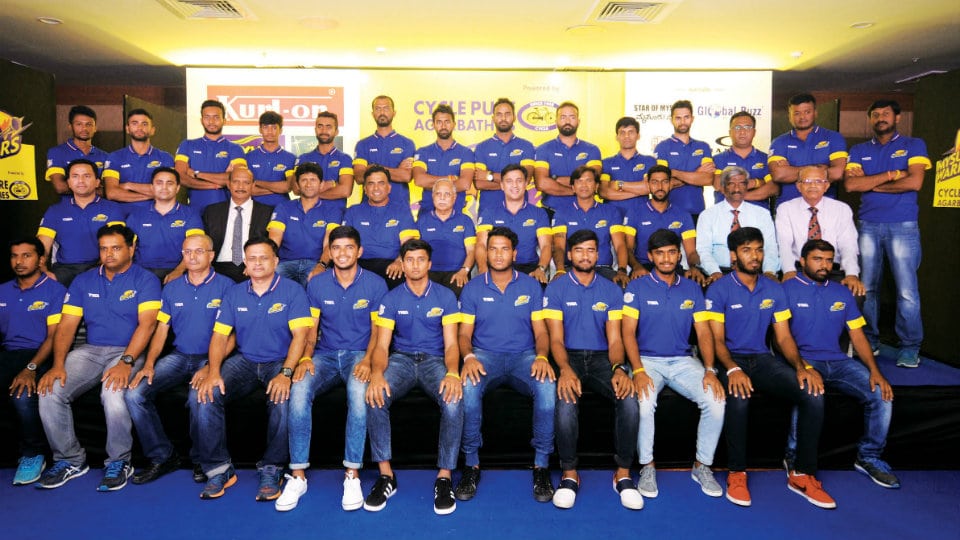 Mysuru: Mysuru Warriors, a Karnataka Premier League (KPL) franchise powered by Cycle Pure Agarbathies, today announced its squad to represent the team in the upcoming season of the Karbonn KPL 2018. The Warriors also announced J. Suchith as captain and Venkatesh Prasad as their mentor — ‘Namma Mentor’ — for the 7th edition of KPL.

Kishan Bedare and Gowtham Sagar are the two players, who emerged from the Mysuru Warrior’s Grassroot Talent Hunt Programme, to represent the team this season.

During the press conference at Southern Star this morning, Mysuru Warriors also introduced their supporters for this season. Cycle Pure Agarbathies retained their spot as the powered by sponsor. The Warriors have also added Columbia Asia, Star of Mysore, BIT and others to their supporter portfolio.

Commenting on the new team, Arjun Ranga, Owner of Mysuru Warriors and Managing Director of Cycle Pure Agarbathies, said, “We are elated with the way the team has shaped up. We have been able to strike the right balance between, youth and experience. J. Suchith has proved himself on various occasions and we are proud to have him as our captain.  We are extremely happy to have Venkatesh Prasad, an exemplary veteran cricketer, on board who will bring his experience and expertise, to the Mysuru Warrior’s table, as a mentor.”

“I have been associated with numerous IPL teams, as a coach and advisor over the years. I hope to translate this experience into results with the Mysuru Warriors team, this season,” said Venkatesh Prasad, Namma Mentor, Mysuru Warriors.

“The Mysuru Warriors have been an integral part of my career and I’m delighted to lead this team this season. I wish to lead by example, during KPL 2018. I would also like to express my heartfelt gratitude to Ranga, and the Selection Committee at Mysuru Warriors, for this opportunity,” said J. Suchith, Captain, Mysuru Warriors.

Modeled on the lines of IPL, the 20-20 tournament is organised by the Karnataka State Cricket Association (KSCA) and will witness competition between seven teams. Started in 2009, the KPL is now in its seventh edition which will commence on Aug.15 and will be played in Bengaluru, Hubballi and Mysuru.

The support team comprises Rx Muralidhar as the head coach, along with Shyam Rao as the trainer. The team has associated with Sri Ranga as the team physiotherapist and Mohan Das as the assistant physiotherapist.

The team also brings Nandish and Athul Rao as Video Analyst, Naresh Mothla as Masseur, M.R. Suresh as the Team Manager, N. Arun Kumar and R. Madhusudan as the team coordinator for KPL 2018.