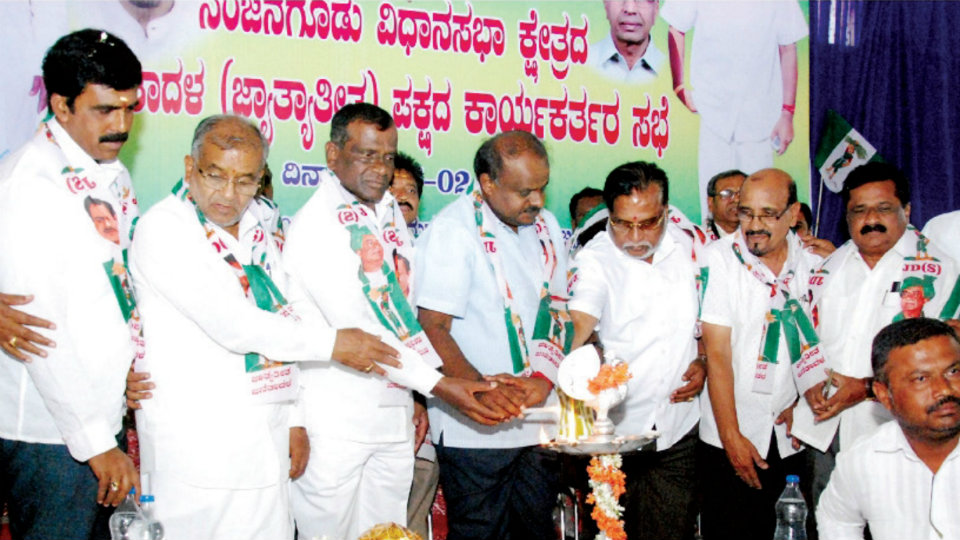 Says Kalale Keshavamurthy is a ‘liar’

Nanjangud, Feb.18 (RS& RNN)- Branding Kalale Keshavamurthy, who recently quit the JD(S) and joined the Congress as a ‘liar,’ State JD(S) Unit President and former CM H.D. Kumaraswamy yesterday said that the party would field a suitable candidate after consultations with party workers.

Addressing party workers at Bharathi Theertha auditorium in the temple town, Kumaraswamy accused Chief Minister Siddharamaiah of ignoring the interests of the people of the town and chanting development mantra only before the bypolls.

Buttressing his claims on Siddharamaiah’s least concerns for the residents, the former CM said: “If at all Siddharamaiah was really interested in the development of the town, he should have released funds when former Minister V. Sreenivasa Prasad was representing the Constituency and not after Prasad’s resignation.”

Charging that the BJP and the Congress were gearing up to pump money to win, the former CM said that the JD(S) needed to raise resources from Party workers for the bypoll.

No dearth of candidates

Speaking to media persons during his brief stay in Mysuru, Kumaraswamy, who claimed that there was no dearth of candidates in the JD(S), criticised  both the BJP and the Congress for poaching Sreenivasa Prasad from Congress and Kalale Keshavamurthy from the JD(S).

Coming down heavily on the Siddharamaiah’s Govt. for planning stringent action on teachers who are threatening to boycott evaluation works, he said that there was confusion in change in text books.