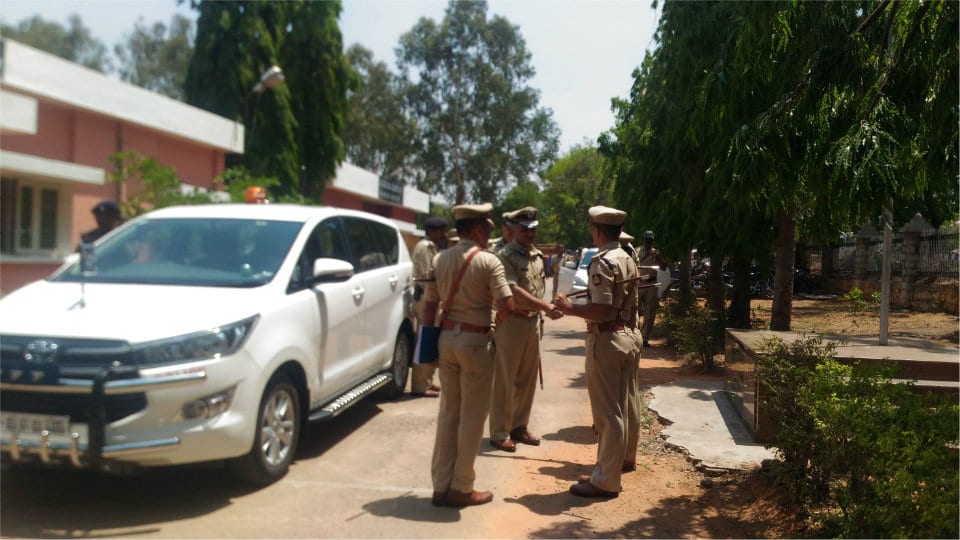 Director General and Inspector General of Police Rupak Kumar Dutta visited Nanjangud constituency this afternoon to take stock of the law and order situation and the security arrangements that have been made for the forthcoming by-election on April 9.

In another meeting held at the Deputy Commissioner’s office this morning, Deputy Commissioner D. Randeep, who is also District Election Officer, told the officials to intensify the random checking of vehicles and seize materials that might be used to lure voters. This includes midnight raids near check posts and checking of all vehicles that move towards Nanjangud.

After his arrival at the temple town, Rupak Kumar Dutta, the State’s top-ranking Police officer headed for a review meeting with Superintendent of Police Ravi D. Channannavar, Additional SP Kala Krishnaswamy and other officers. He was accompanied by Additional Director General of Police (law and order) Alok Mohan and Southern Range IGP Vipul Kumar.

Dutta’s visit has assumed significance as the Police are facing a daunting task as they have to manage three major events back-to-back: Security for by-election, SSLC examinations and the Jathra Mahotsava.

An elaborate security plan has been prepared by the District Police to ensure the smooth conduct of the election that will be held amidst SSLC examinations and the Nanjangud Dodda Jathra Mahotsava. While the SSLC examinations will be held from Mar. 30 to April 12, the annual Jathra Mahotsava  will begin from Mar. 31 (tomorrow) till April 11. The annual Rathotsava falls on April 7.

Sources said that as many as 236 polling booths have been set up in Nanjangud for a voter population of over 2,00,498 voters. A total of 72 booths have been marked as hyper-sensitive while 124 booths are being considered to be sensitive.

Of the 18 SSLC exam centres in Nanjangud taluk, eight are also polling stations and this has made parents of some students a worried lot. Though there is no exam on April 8 and 9, SSLC mathematics paper is scheduled for April 10. Parents fear that if there is any election-related violence at the centre, the exam may be affected the following day.

School managements have been asked to vacate the schools on April 7 (Friday) afternoon after the exam. They will be occupied for election purpose on the next two days, with the election officials vacating around 7 pm on Sunday after collecting the voting machines.

Deputy Commissioner D. Randeep said that as there is no SSLC exam on April 9 (voting day), polling booths will be established in a few centres. In addition, Police forces will be deployed to manage the  crowd. He said the district administration is well prepared to conduct the election, examination and Jatra Mahotsava in a peaceful manner.

Additional Deputy Commissioner T. Venkatesh, who is also the Deputy Election Officer, said that the election will not hamper smooth conduct of the exam. “Schools would be vacated on Sunday evening and teachers could mark the register numbers soon after the polling. Parents need not worry as we have taken all steps to ensure that no untoward incidents take place on April 9,” he said.