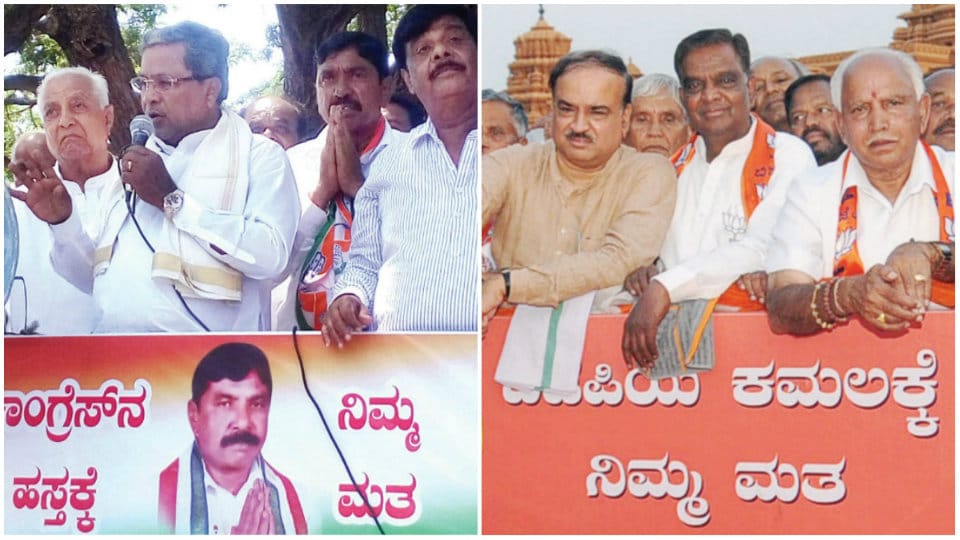 Mysuru – The public campaign for the forthcoming by-election for Nanjangud and Gundlupet Assembly Constituencies to be held on Apr. 9 will come to an end tomorrow (Apr. 7) at 5 pm. Beyond that no political party will be allowed to hold public rallies and meetings. The candidates can, however, indulge in low-pitch door-to-door campaign and individual meetings.

One reason for this bar against canvassing for votes after a specified cut-off time is to provide the voter an opportunity to contemplate all options before he/ she makes a choice.

With the public campaign ending tomorrow, the Mysuru District Administration has banned the sale of liquor in Mysuru district from tomorrow 5 pm till the midnight of Apr. 9 when the polling comes to an end. Chamarajanagar administration too is likely to impose a liquor ban from tomorrow till the poll process is over and the communication to this effect will be released by today evening.

For both Congress and BJP leaders in the State, it is today, tomorrow or never to woo the voters. Heavy-weights from both the parties are camping in Gundlupet and Nanjangud to ensure the victory of their candidates. In Nanjangud, BJP’s V. Sreenivasa Prasad is pitted against Kalale Keshavamurthy of the Congress, in Gundlupet, Geetha Mahadevaprasad of the Congress is fighting against BJP’s C.S. Niranjan Kumar.

Both the constituencies have come under the grip of soaring summer heat and this has made no impact on the candidates and canvassers as they are going in full-throttle too woo voters.

Chief Minister Siddharamaiah himself is leading the campaign for the ruling party and has deputed at least 16 Ministers in the two constituencies to ensure victory of Congress candidates. The BJP campaign is led by former Chief Minister and BJP State President B.S. Yeddyurappa.

This morning, a day before the public campaign comes to an end, the Congress, led by Chief Minister Siddharamaiah, held a road show in Nanjangud where thousands of party workers and public took part. Canvassing for Kalale Keshavamurthy, he appealed to the voters to vote for development.

The Congress road show, however, brought traffic in Nanjangud to a grinding halt. Vehicle movement was stopped and the Police had a tough time in controlling the crowd and irate vehicle users.

‘BJP WILL WIN BOTH SEATS’

Addressing a press conference in Nanjangud this morning, Yeddyurappa expressed confidence that the BJP would wrest both Nanjangud and Gundlupet from Congress. “The election will herald a new beginning for BJP and we will be successful in Mission 150 in 2018 General Elections,” he said and added that the ‘desperate’ Congress is using money power and other unfair means to win the election.