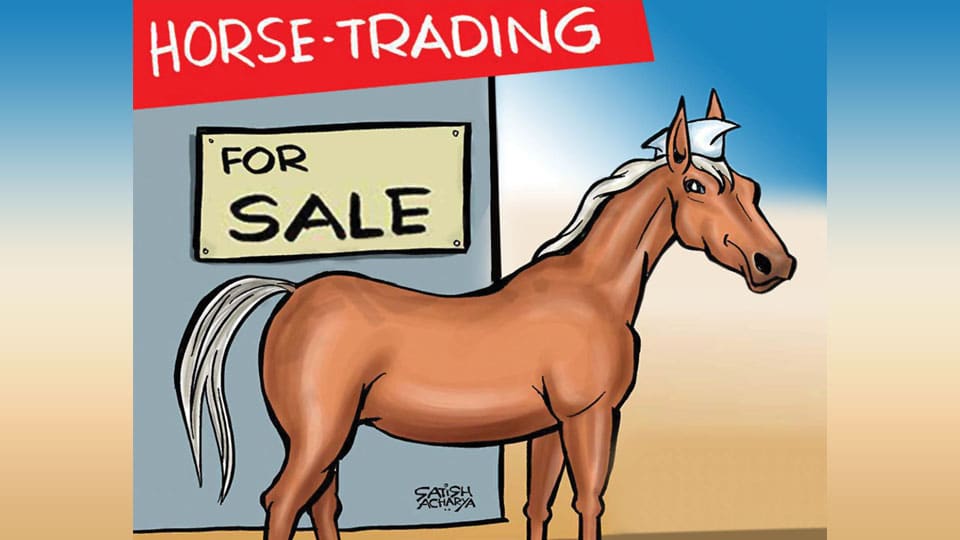 The political drama in our State with every passing election is becoming like a Bollywood Director Rohit Shetty’s comical-action with multiple star cast — there are heroes and villains, there are fighting scenes and crying scenes, there are fancy cars and private jets. But unlike ‘Chennai Express’ audience who were entertained, the ‘Karnataka Express’ audience, the voters, are witnessing a horror show.

In January this year, there was a “trading” war between BJP and Congress where the BJP had sent its MLAs into hiding to Gurugram while trying to entice Congress MLAs. Back then, Siddharamaiah had thundered, “Saffron party leaders are trying to destabilise the Government for the last six months.” And added saying, “Yeddyurappa has crossed 75 but is not mature. He desires to become CM again by indulging in horse-trading. This is against the Constitution.”  Oh! Congress never indulges in horse-trading and has always been on the right side of the Constitution?

Now again, Siddharamaiah is blaming the BJP for the present turmoil. But of the 10 MLAs sitting in Mumbai, aren’t five his staunch followers? In January this year, many Congress MLAs said it was the tussle between Siddharamaiah and D.K. Shivakumar about plum posts in Boards and Corporations going to their acolytes that had caused discontent. This time, H.D. Deve Gowda’s family members ordering MLAs around and not allowing them to take decisions is said to be the reason.

Everyone knows when it comes to politics, people who make decisions about transfers and approvals are the ones who make money. So, are the MLAs frustrated that they are unable to make any money as they have been simply given a position but cannot use to enrich themselves?

READ ALSO  ‘Congress must introspect on misuse of CBI’

Now, while our leaders were practicing yoga in resorts and enjoying spa treatments, something important happened in Bengaluru. Two days ago, on Thursday, while our leaders were busy playing hide-and-seek, the National Investigation Agency seized five fabricated hand grenades, one timer device, three electric circuits, suspected explosive substances and components used for making IEDs (Improvised Explosive Device) from a house in Soladevanahalli area in North Bengaluru. Yes, terrorists from an outfit called Jamat-ul-Mujahideen were planning to bomb Bengaluru and no one was bothered! Even the media didn’t give it the prominence it required.

While our leaders were seen wearing gold watches, driving in expensive SUVs, flying between Mumbai and Bengaluru in private jets, Rs.132.21 crore meant to feed poor and malnourished children was still lying in the bank unused! Yes, while our netas were getting fat in resorts, children went hungry as their food money received by the Karnataka Government from the Centre under the ‘Poshan Abhiyan’ Scheme to rid malnutrition just sat unused.

Also, while our Water Resources Minister D.K. Shivakumar was busy standing in the rain outside a hotel in Mumbai trying to win back the rebel MLAs, like a heart-broken hero standing outside the house of his lady love in the wind and rain to show his sincerity and convince her to come back, the Karnataka State Natural Disaster Monitoring Centre warned that it has been 40 days since Bengaluru got rains and that the city may face a  major water crisis!

Oh! And while all this was happening, the Mayor of Bengaluru, instead of sorting out water crisis, is busy trying to name a Road after Minister D.K. Shivakumar’s father ! Yes. Naming one-kilometre stretch of Road in Bengaluru as ‘Dodda Aladahalli Kempegowda’ is the priority for the Mayor of Bengaluru when people may not have water in the city. I guess that’s good because then the city needs water tankers and that translates to commission.

Now, the BJP has moved its MLAs to a resort as the hunter has become the hunted.  Since Congress-JD(S) lost their MLAs, they are now hunting BJP MLAs. And everyone knows JD(S) and Congress have the best ‘Hunting Specialist’ and ‘Safe-Keeper’ in Indian politics — H.D. Kumaraswamy and D.K. Shivakumar.

The irony of this time’s “hide-and-seek” is that D.K. Shivakumar — and back in 2002 — had managed to keep 40 Congress legislators from Maharashtra safe in Golden Palms Resort, Bengaluru. This time he had to rush to Maharashtra as someone was keeping his MLAs safe there, away from Bengaluru.

The JD(S) is a specialist in resort politics. That is why one JD(S) leader boasted to Economic Times newspaper saying, “We set the trend and now resort politics has become the norm.” Wah! What a thing to be proud of. But he is right. In 1983, Ramakrishna Hegde, who led Janata Party in Karnataka, fearing a threat to topple his Government by Indira Gandhi, had hid his MLAs! And who was the man who was by his side then? It was none other than former Prime Minister H.D. Deve Gowda, father of H.D. Kumaraswamy.

The way political parties are trying to hide their MLAs, pretty soon banks will offer a locker service to deposit MLAs who can be retrieved when it is time for the floor test.

If the people of Karnataka vote the same resort politicians, then we deserve what we are getting. As long as we have irresponsible voters, we will continue to suffer irresponsible leaders.

For now, just when we thought the CM would resign, he has confidently asked for a ‘Vote of Confidence!’ May be, he is convinced by what his astrology-obsessed brother Revanna said, “My brother has the blessings of God and will continue as the CM.”  We wonder when God will bless us, the people of Karnataka, with rains and sincere leaders with brains.