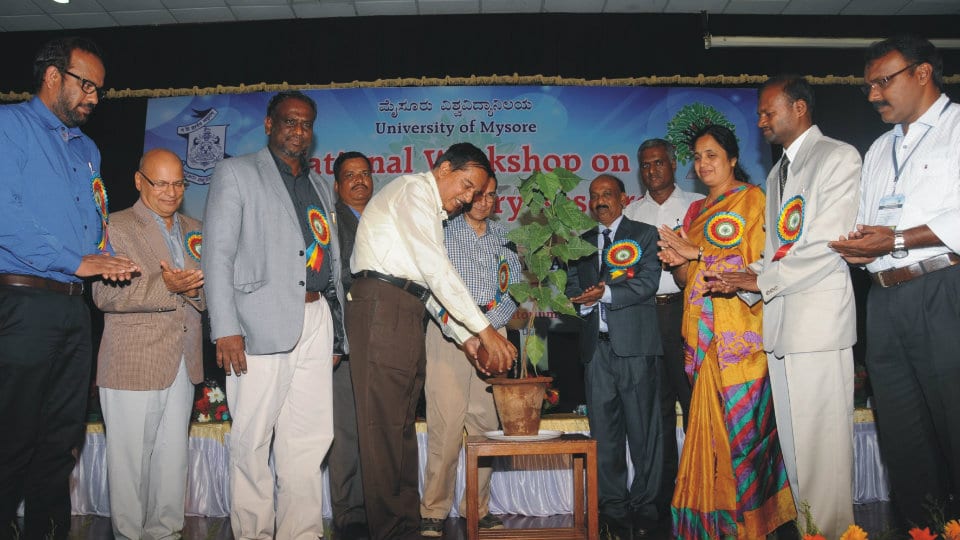 Mysuru: Prof. H. M. Maheswaraiah, Vice-Chancellor, Central University of Karnataka, Gulbarga, said that Interdisciplinary Research or multidisciplinary and Transdisciplinary research is a mode of research, which involves more than one academic disciplines.

He was speaking after inaugurating the National Workshop on ‘Multidisciplinary Research,’ organised by the Institute of Development Studies (IDS), Bahadur Institute of Management Sciences (BIMS) Department of Public Administration and All India Researchers Association, here this morning at the BIMS auditorium by watering a sapling.

Stressing on the importance of interdisciplinary knowledge and researchers, he said that immigrants often make important contribution to their new field.

Before the inaugural address, Prof. Maheswaraiah regretted that the century-old University of Mysore did not have a permanent Vice-Chancellor even nine months after previous Vice-Chancellor Prof. K.S. Rangappa demitted office.

An alumnus of the University of Mysore, he said that it was unfortunate that a suitable candidate has still not been found to head the University.

“I am very upset that a renowned University like this, which is known all over the world is functioning without a permanent VC for the last nine months. It is high time that the State Government and the Governor should take a decision and appoint a Vice-Chancellor immediately,” he said.

An in-charge Vice-Chancellor cannot take important decisions as his hands are tied. As a result, the development of the University suffers, Prof. Maheswaraiah observed.

“The University celebrated its centenary last year and the year-long celebrations with the President, Prime Minister and the Vice-President attending it was indeed a great achievement. It also has many departments. However, to see it in such a sorry state immediately after the centenary celebrations pains me a lot,” said Prof. Maheswaraiah in an anguished voice. He once again urged the State Government to appoint a full-time Vice-Chancellor at the earliest.

Nearly 125 research scholars out of whom nearly 30 from different parts of the country are participating in the three-day workshop.