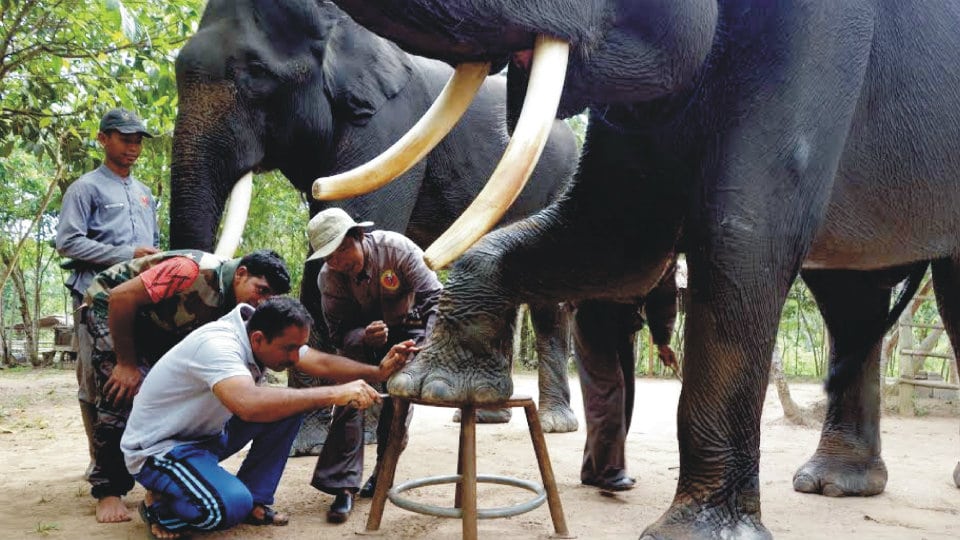 When our Mahouts stumped intl. audience at Indonesia

Two Mahouts, one each from Mysuru and Kodagu, have left an ever-lasting impression in Indonesia with their elephantine knowledge about elephants, their behaviour and overall well-being. The Mahouts were sent by the Forest Department to Indonesia after being requested by Indonesian Mahout Communications Forum, FOKMAS. FOKMAS bore their air fare and other expenses.

It was first for the Forest Department that their two Mahouts J.N. Vasantha of Mathigodu Elephant Camp (Hunsur division) and Nayaz Pasha from Dubare elephant camp (Madikeri division) were invited for the workshop that was held at Lampung province in Sumatra, Indonesia from May 11 to 19 this year. This year’s Indonesian Mahout Workshop was supported by Asian Elephant Support (AES) and it was unique as it brought together two groups of Mahouts from different countries that are supported by AES. The Mahouts were guided by Dr. Mamatha Sathyanarayana, Assistant Professor, De Paul International School, Mysuru.

AES recognised Mamatha’s tireless work to provide educational opportunities for Mahouts and had requested the Karnataka Forest Department to send its Mahouts to attend the workshop.  It was a wonderful opportunity for the two cultures to share information and their experiences on elephant care.

The Indonesian Mahout Workshops were initiated in 2006 at the Seblat Government Elephant Conservation Centre, Bengkulu province in Sumatra. FOKMAS was also established in 2006 and its goal is to improve communications and provide ongoing training via various modules at such workshops. These workshops are supported by the Indonesian government and various NGOs, including AES. The workshop provides meaningful data for wildlife conservation, habitat protection efforts and the methods to improve the care of captive elephants.

There were presentations on various topics followed by hands-on demonstrations. The demonstrations included GPS training, the use of an ultrasound, footwork, obtaining field measurements to estimate the weight of an elephant, and actually weighing the elephants on a portable scale. The workshop provided an opportunity for Mahouts to share information, strengthen their professionalism, and influence elephant conservation more effectively. General issues discussed during the workshop included problems Mahouts encounter in their elephant work and habitat conservation efforts, finding solutions to improve the care and management of wild and captive elephants and means to create an information network with Mahouts throughout Asia.

This year’s workshop was attended by over 60 Mahouts drawn from various wildlife sanctuaries across Asia. Vasantha and Nayaz Pasha reached Jakarta on May 11 and reached Lampung that is an hour’s journey from Jakarta. From there, they proceeded towards Way Kambas National Park covering 1,300 square kilometres in Lampung province, southern Sumatra. The extent of this National Park equals Bandipur Tiger Reserve and National Park in Karnataka. 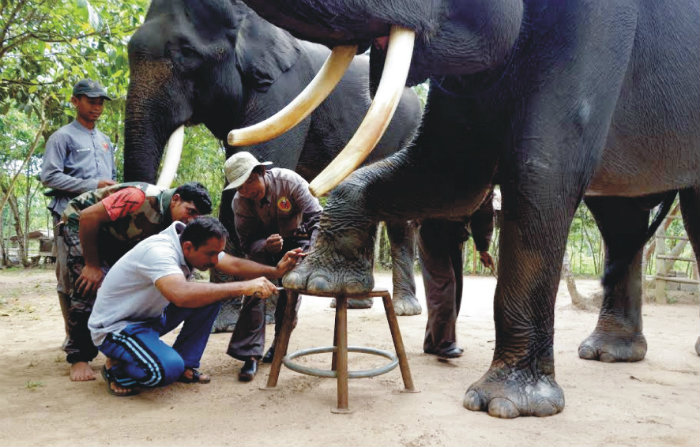 Nayaz Pasha and Vasantha examine the front foot of an elephant at the Indonesia elephant workshop.

The Mahouts stayed at the Way Kambas National Park for two days where they were taken to Tegal Yoso elephant response unit. Later, they proceeded towards Lembah Hijau Zoo. A wide range of topics including the overall health, feeding strategies, the use of an ultrasound machine, use of GPS units and software updating skills, and incorporating technology into their operations were discussed at the workshop.

As India has such a long and intricate history with elephants dating back to epics of Ramayana and Mahabharata, Nayaz Pasha and Vasantha were surprised to learn that the elephant tradition in Indonesia is only about 30 years old.

Even with a much shorter history with elephants, Indonesian Mahouts provided valuable information on the importance of the use of technology and the proper usage of tools to care for elephants. Special elephant trainers from USA and Germany also participated as resource persons at the workshop. 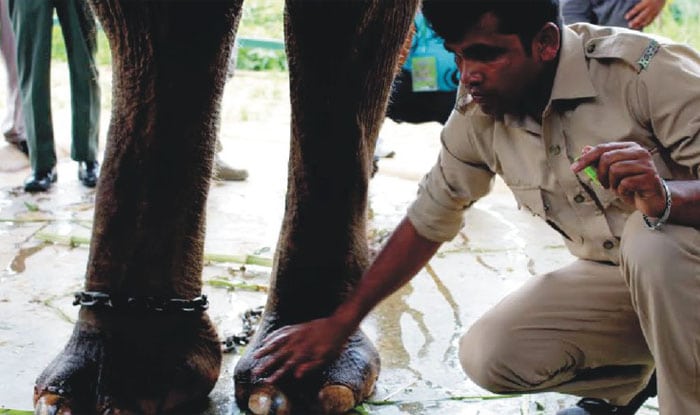 Speaking to Star of Mysore, Vasantha said that there were over 60 Mahouts and they were able to exchange ideas. “Language was not a barrier and we explained native tricks like applying oil on the elephant’s forehead and legs to keep them cool and composed. We stunned the vets there when we visually determined that an elephant had never conceived,” he said.

“We also taught the Indonesian Mahouts the importance of proper feeding strategies, allowing elephants to roam freely in the forest, and the importance of cleaning the tusks.  There was also a lot of discussion on caring for baby elephants,” Vasantha added.

This workshop was an excellent example of how important it is to provide these types of educational opportunities. “This has renewed our energy to support the people who care for elephant throughout Asia. Both Vasantha and Nayaz Pasha impressed the other Mahouts with their native knowledge of elephant caretaking,” claimed Dr. Mamatha Sathyanarayana. 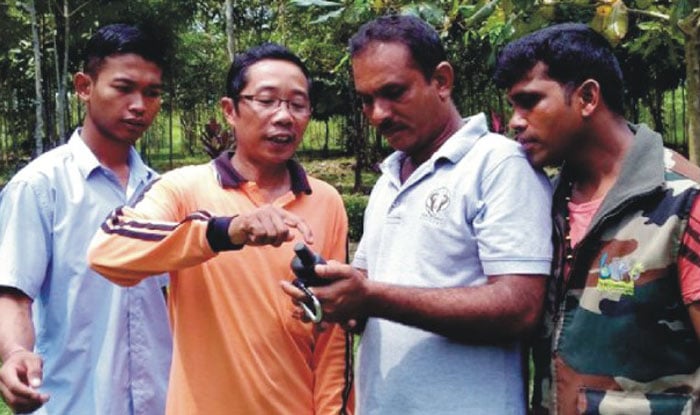 Nayaz Pasha and Vasantha being taught about GPS instrument.

At the workshop, there was a session to detect if an elephant was pregnant. The programme was to guide the Mahouts to use an ultra-sound machine to determine if it is pregnant and the months that have passed in pregnancy. Accordingly, the date of delivery was to be determined.

Just before the session started, Nayaz Pasha from Dubare Elephant Camp felt the stomach of the female elephant. Precisely touching certain parts of the stomach, he declared that the elephant was not pregnant.

Veterinarian Christopher later appreciated Pasha for his innate knowledge. “You touched the elephant and said it was not pregnant while we said the same thing using machines. I am surprised by your knowledge and I feel that all Mahouts must develop such knowledge,” he told Pasha.