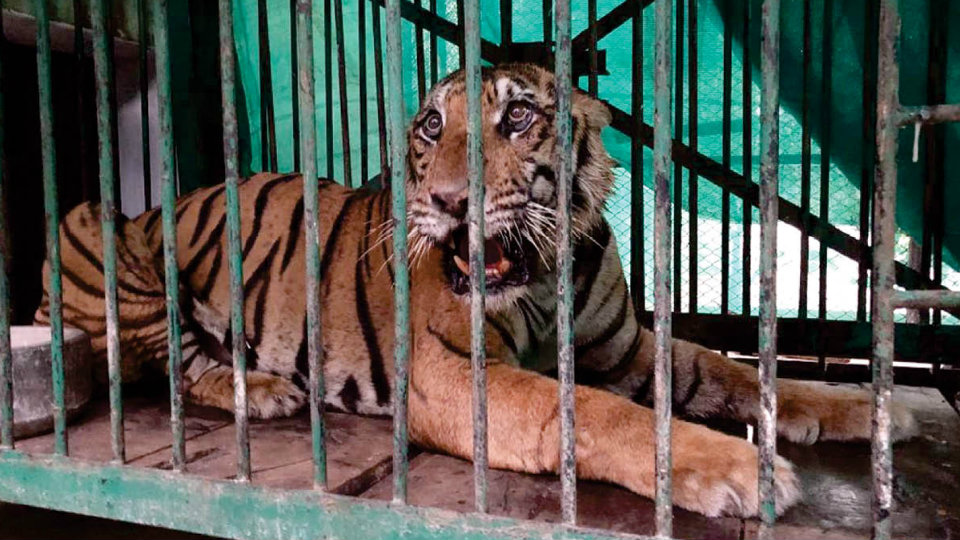 Mysuru: If the Maharashtra Forest Department and that State Government faced intense criticism for killing man-eater tigress T-1 (Avni) at Maharashtra’s Yavatmal recently, the Karnataka Forest Department officers in the Mysuru and Nagarahole ranges have received accolades for  successfully capturing the tiger which had killed three persons on the fringes of Nagarahole National Park.

The big cat was tranquillised last week at Aanemala, a dense forest area in the Doddabyranakuppe (D.B. Kuppe) range of the National Park.  It is at present lodged at Sri Chamundi Wild Animal Rescue Centre at Koorgalli on the outskirts of Mysuru.

The male tiger is injured in its hind leg. According to Zoo Executive Director Ajit M. Kulkarni, the health of the tiger was improving by the day. “The tiger is eating 8 kilograms of meat every day and it has sustained minor injuries and there are scratch marks on its body. We have started dressing and medicines are being applied,” he said. “The behaviour of the tiger has been aggressive. Till now it was roaming freely in the forests and now it has been caged. Naturally it is angry. It roars continuously in the night,” Kulkarni added.

If this is the present condition of the tiger, to capture or kill it, the Forest Department had worked out a detailed strategy. While the pressure on them from the villagers to capture/kill the feline was high, there were also strict guidelines laid down by National Tiger Conservation Authority (NTCA). The NTCA is a statutory body under the Ministry of Environment, Forests and Climate Change working for the conservation of tigers.

Before beginning the operation capture, the Department staff had examined CCTV footages in the cameras installed inside the forests. The camera traps showed two tigers and one of them was 8 to 9-years-old and the other was around 6 to 7 years. The tigers were captured by the camera traps installed at one place at two different timings. This had confused the officials and had proved a daunting task.

Also, one of the tigers had lost its vision at a very young age. While the Department officers were deliberating on the camera-trapped tigers, what proved a clincher were the pug marks. Comparing the pug marks of the tiger with the ones that were recorded at Mallanamoole, Hullumutlu, Thimmana Hosahalli where the feline had attacked two people, the officials zeroed in on the big cat that had attacked humans.

The tiger had lost its strength to hunt and was pushed out of the forests by other territorial tigers and this made the feline to pounce on people, an easy prey. It targeted tribals who ventured inside the jungle either to answer nature’s call or dig the earth to pick tubers. As it was injured in its left hind leg, the feline was not able to step properly on its tack and the leg’s mark was not visible.

The Department personnel drew up a meticulous plan to trap the tiger. In all, six elephants including Arjuna, Abhimanyu and Sarala, were used for the operation. The elephants were divided into three groups and stationed at vantage points to ensure that the tiger did not escape.

Guards and Range Forest Officers who had worked earlier in D.B. Kuppe range including Vinay, Muthuraj and Dinesh were deployed in the operation and they had knowledge of the places where the tiger could have hidden. DCFs Siddramappa Chalkapure and Prashanth Kumar were given the responsibility of bringing six cows to be kept as baits.

When the dart was fired

The tiger was spotted by guard Dinesh, who was proceeding inside the forests along with five villagers and the cow. As soon as the tiger was spotted, the villagers ran away. But Dinesh stood ground, took pictures and videographed the big cat and sent the same to his higher officials. Later, Dasara elephant caretaker Akram Pasha, who doubles up as Department sharp-shooter, fired the dart.

Even after firing the dart, officials and guards dithered to go near the tiger. Umashankar, a veterinarian from Bannerghatta National Park walked up to the tiger barefoot and fired the second dart. Only then the other Department staff closed in on the tiger.