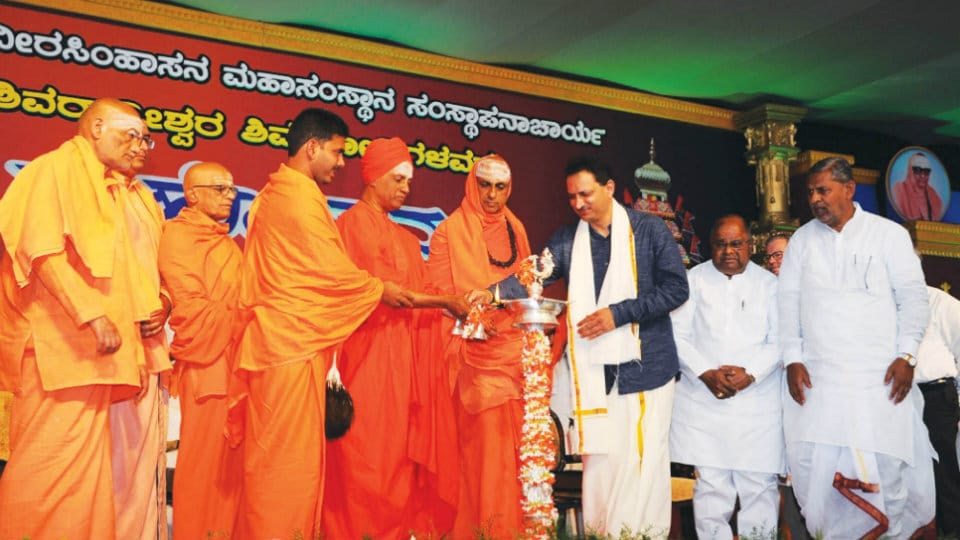 Seer calls upon people to follow the path of Dharma

Nanjangud: Tumakuru Siddaganga Mutt Seer Sri Siddalinga Swamiji has called upon the people to follow the path of Dharma and to inculcate human values. The Seer was delivering a discourse at the Religious Meet at Suttur Jathra Mahotsava on Sunday. Pointing out that every religion — Islam, Christian and Hindu — has explained the essence of religion, Sri Siddalinga Swamiji said that all religions have advocated harmony and humanity.

Noting that everyone should understand Basavanna’s philosophy ‘Dayave Dharmada Moolavayya,’ he said that treading the path of Dharma will take one to greater heights.

Observing that ignoring Dharma will take one to the path of destruction, the Seer regretted that the society was witnessing lack of peace and happiness, despite having all the facilities.

Noting that our inner mind will always be thinking about good and bad, he said that all evil thoughts must be destroyed for a peaceful and purposeful society.

Complimenting the Suttur Mutt for organising annual Suttur Jathra, which is aimed at taking everyone on the path of ‘Bhakti Marga,’ he said that the Jathra largely helps in creating religious awareness among the people.

Recalling the services of late Siddaganga  Mutt Seer Sri Shivakumara Swamiji, who passed away at Tumakuru recently, Sri Siddalinga Swamiji said that although the Seer has physically departed from us, he will be always etched in the memory of crores of people.

S.B. Mohammad Darimi of Dakshina Kannada Central Juma Masjid said that there were no issues between religions. But those in power are making an issue out of it for political gains and this has resulted in problems.

Claiming that the philosophy similar to Basavanna’s can also be found in Islam, he said that Hindu, Islam and Christian religions should have a common thinking for the development of mankind.

Referring to the recent controversial remarks by some political leaders targeting one religion, Mohammad said that speeches should be more focused on uniting people rather than dividing them.