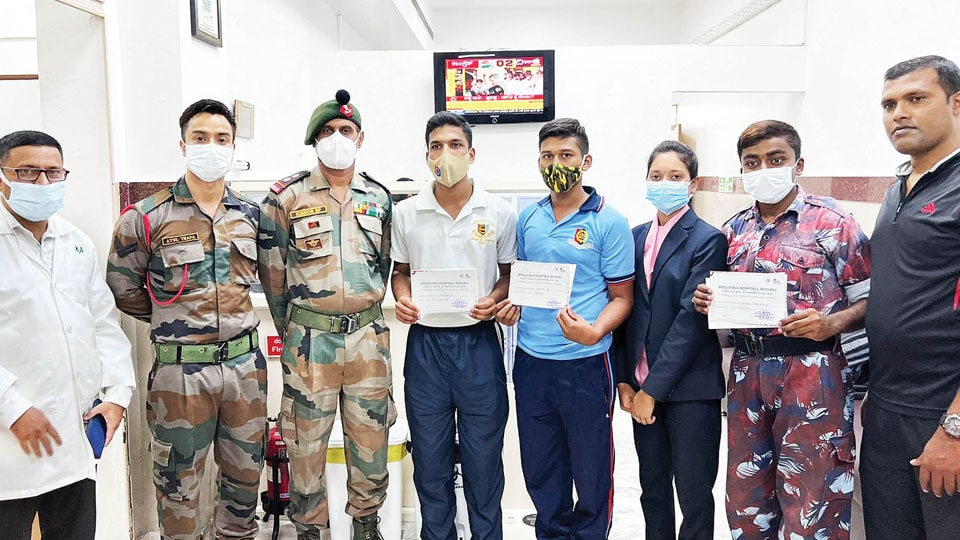 Mysore/Mysuru: The Cadets of the National Cadet Corps (NCC) donated six units of blood and saved the life of a patient, who was suffering from dengue fever with platelet count drastically dropping.

The patient was undergoing treatment at a private hospital in city and ironically, the Cadets after donating blood came to know that the patient was a serving Army Officer.

On June 10, 14 Kar Bn NCC, Mysuru unit, was approached with a request for blood as the blood platelets of the patient suffering from dengue was drastically dropping.

Soon, the NCC unit contacted Cadets Senior Under Officers K.M. Deeksha, S. Chaitra and M. Prajwal, who responded immediately and motivated other Cadets to reach the hospital, where the patient was admitted and donate blood.

In all, seven units of blood were donated, out of which six units were donated by the NCC Cadets and one unit by an Army Jawan.

The Cadets assured the patient’s mother that they would be at their service anytime and anywhere. It was at this juncture the Cadets came to know that they had donated their blood to a serving Army Officer.

This gesture by the NCC Cadets not only saved the life and provided solace to his family members but also proved the dedication and commitment of NCC Cadets for the noble cause and contribution to the society.