Home » News » There is need for change in education system:  Tanveer Sait 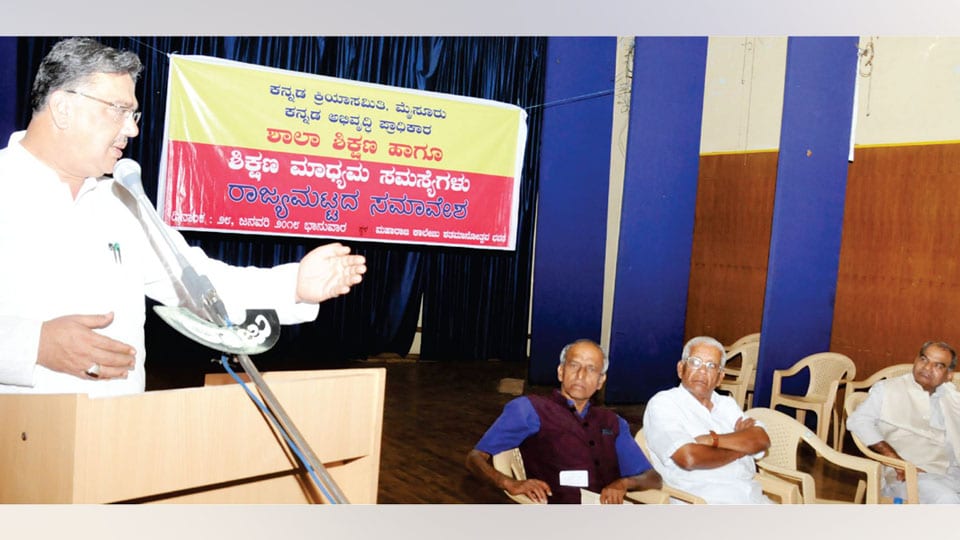 There is need for change in education system:  Tanveer Sait

Mysuru: Primary and Secondary Education Minister Tanveer Sait has said that there is need for a change in the education system.

He was speaking at the valedictory of a seminar titled ‘School Education and Medium of Instruction Problems’ organised by the Kannada Action Committee and Kannada Development Authority at Maharaja’s College Centenary Hall here on Jan.27 and said that the involvement of the middlemen in the Department has increased.

“We have brought out a lot of reforms to stop such a mafia. There is a general feeling that has grown that Government School is for the poor children, while private school is for the well-to-do. Thus the society has been divided. However, all children should have access to the same kind of education. In this direction, there should be a complete change in the mindset of the people working in the Department,” he said.

Karnataka Education Policy: The 21-point recommendations put-forth by Kannada Development Authority for the empowerment of Government Schools will be placed before Cabinet Committee for discussion. The Government is seriously considering implementing many of the recommendations, he said.

All efforts are on to implement the Karnataka Education Policy, which will include various aspects like teaching, expansion of classrooms, equipment and other basic facilities.

Karnataka Public School: There are 21,000 primary and 23,000 higher primary schools in the State. Steps have been taken to see that children do not have to run from pillar to post to get admissions to middle, high school and PU courses.

Quality education: Instead of telling that the Government Schools are providing free meals, shoes, cycles, bags and books, the people should say that quality of education provided here is free. A lot of reforms have been brought in, in this direction, he said.

Even in the CBSE and ICSE system of education, it has been directed to introduce Kannada compulsorily as a subject and even in Kannada medium schools, English should be introduced to the students along the lines of ‘Nali-Kali,’ he said.

A world record has been created at the examinations held for lakhs of students studying in standards IV to IX, last November using the OMR sheets. There is also a system ‘Vishwasa Kirana’ programme where in special classes are conducted. Even the transfer policy is teacher-friendly, he said.

Along with Best Teacher award, School Development and Monitoring Committee (SDMC) award is also being presented. The HMs and SDMC Presidents bank account will be checked and if there is any discrepancy then the officials will be asked to take action, he said.

Teachers’ role: The Law has been amended to bring all the schools started in the State under Education Dept. Action has been taken to protect the children’s safety and fees on private schools will be capped. However, just through law, it is not possible to implement Kannada language and development of Government Schools, he said.

To implement all these, teachers’ cooperation is also very important. There are 103 types of teacher cadres. “If there is a delay in releasing salaries, it is not right on the part of the teachers to resort to strikes. At the same time, the Department will not allow the students and teachers to be misused for celebrating the birthdays or in participating in private programmes. I strongly oppose these moves,” he said.