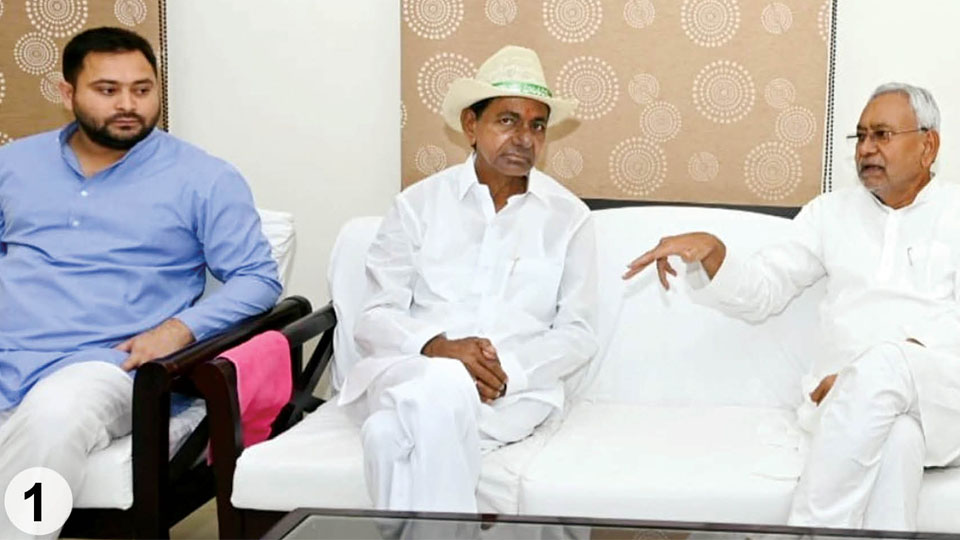 Telangana Chief Minister K. Chandrashekar Rao (KCR) visited Bihar on Wednesday. He met Chief Minister Nitish Kumar and called for a ‘BJP-mukt Bharat’ and much more. While he said plenty for us to hear, we had just one thing to see, a South Indian Cowboy. KCR had a cowboy-type hat on!

It looked odd to see a South Indian politician in simple white khadi with a cowboy hat seated between two Bihar leaders, one of whom happens to be the son of India’s most famous cowboy, Lalu Prasad Yadav.

Does fashion in politics matter? Yes, it does. A leader’s fashion sense is serious business. How we dress affects how we perceive ourselves and others. And to a large extent, electoral politics is about perception rather than policy.

Even Gandhiji was aware of the power visual imagery holds and its impact. Late British PM Winston Churchill called Gandhiji a ‘half-naked fakir.’ It was the same year Gandhiji was invited for tea with Queen Mary and King George V at Buckingham Palace. Gandhiji wore his usual attire — dhoti with loincloth draped over his naked torso. After the meeting, as Gandhiji was walking out of the Palace, someone asked him if he thought he was “wearing enough.” Gandhiji replied, “But the King was wearing enough for both of us.”

Gandhiji wanted to send a message of ‘solidarity with the poor,’ but he maintained this sartorial choice even when he travelled abroad because he knew its impact on creating a perception among the Westerners.

The photograph of a ‘half-naked fakir’ on the cover of a Western newspaper had a tremendous impact. It evoked a sense of sympathy among the Western public and outrage against imperialism.

Interestingly, while Gandhiji was called ‘half-naked-fakir’, his two protégés became not only the first premiers of their respective nations but also fashion icons.

Mohammed Ali Jinnah always wore three-piece suits from London! He only started wearing Sherwanis after the creation of Pakistan to impress the people of a new Islamic nation. His long Sherwani-type jacket came to be known as the ‘Jinnah Coat.’

Nehru too was a dapper-dresser. He shortened the ‘bandhgala’ jacket, cut off its sleeves, and it became famous as the ‘Nehru Jacket’ until… Modi wore a slightly longer version and turned it into a ‘Modi Jacket’!

It’s no secret that our Prime Minister uses everything from headgear to formal wear to create a perception of both his party’s political success and our nation’s perception abroad.

We remember when the PM wore crisp white traditional Tamil Karai veshti (dhoti with border), angavastram (a stole) and a half-sleeve white shirt during Chinese President Xi Jinping’s visit to Mamallapuram in Tamil Nadu. Why did he choose this attire?

Modi turned into a fashionista and soon became PM. On his first visit to the US after becoming PM, The New York Times newspaper wrote an article about him titled ‘A Leader Who Is What He Wears.’ The Washington Post stated, “Move aside, Michelle Obama. The world has a new fashion icon. And no, it’s not Vladimir Putin, despite his fitness regimen — it’s India’s new Prime Minister, Narendra Modi.”

Every leader conveys something with what he wears. Bal Thackeray began his political career wearing a simple shirt and pants so that the middle-class office-going Mumbaikar could relate to him. Once he got their votes, he wanted more. Then one day, he appeared in saffron.

In the South, too, we had leaders like M.G. Ramachandran, who wore fur caps and sunglasses that became his visual trademark. It had such a visual impact that in 2017, the Sasikala faction of the AIADMK chose the fur cap as its symbol for by-elections in the State. One of the leaders said this ‘fur hat’ symbol would help attract voters as they would easily associate it with MGR.

P. Chidambaram uses the same strategy. He wears a dhoti and balances his shawl on his shoulders. Similarly, our own Vatal Nagaraj wears a fishing cap and dark glasses. Katta Subramanya Naidu has his furry cap.

All this is to leave an impression, and it creates recall value.

Speaking of recall, in 2012, Dr. Manmohan Singh attended the gala dinner at the 10th India-ASEAN Summit in Phnom Penh, Cambodia. While the event made news, so did our Prime Minister, who looked like a bottle of Fanta! The orange drink with a blue cap.

Dr. Singh should have taken his boss’ advice. Speaking at the National Institute of Fashion Technology in Rae Bareli, Sonia Gandhi said: “There is a trend in Indian fashion to overdo and over-embellish clothes. It completely overshadows the wearer.” We may have to agree with her. After all, you can take an Italian out of fashion but can never take fashion out of an Italian.

Fashion is part of image-building, both in politics and business. And brand-building is an expensive proposition. One example: Gandhiji drank only goat’s milk as only the poor drank it. So, a goat had to be packed off with Bapuji wherever he went. When Gandhiji visited England for the Round Table Conference in 1931, his two goats sailed with him! That’s why, as Sarojini Naidu said, “It is becoming a costly affair to keep Gandhiji in poor conditions.”

Though keeping Gandhiji looking poor was expensive, it was money well spent because, at that time, the nation needed an icon who could unite people of all classes and create awareness about India’s struggle in the West.

Like actors, our politicians today have to dress and act the part, for they too have to fill up theatres, the theatre of Democracy — The Parliament.

As for KCR, who is touring States garnering support to make ‘BJP-mukt Bharat’ while wearing his cowboy hat, maybe hoping to replace it with the Prime Ministerial Crown, he should remember Nitish Kumar may not wear a cowboy hat, but he sure knows how to pull down a cowboy. Just ask his deputy’s father.