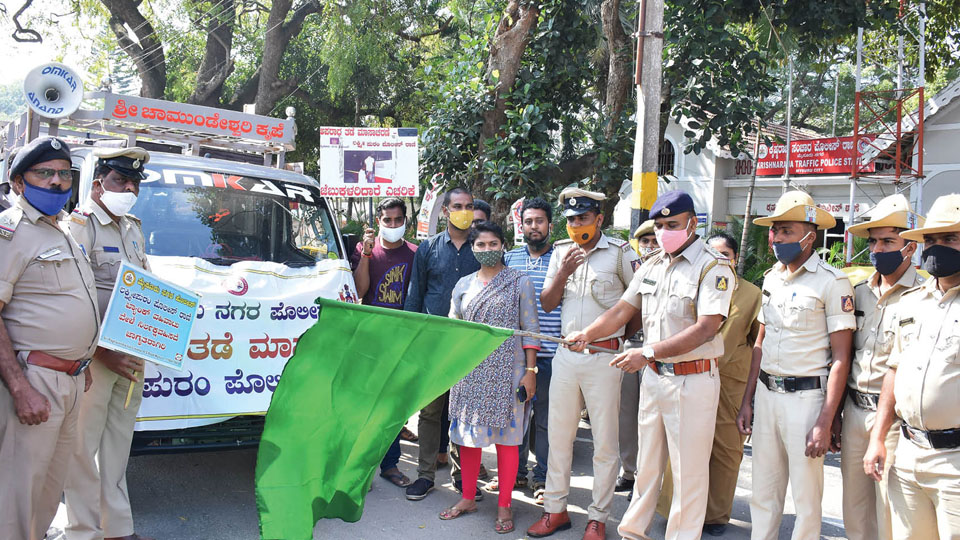 Mysore/Mysuru: Crime prevention awareness along with COVID-19 sensitisation and awareness was launched in city by Lakshmipuram Police yesterday. A jatha was held in the programme that was a part of Crime Prevention Month.

Lakshmipuram Inspector R. Venkatesh flagged off the jatha in front of the Police Station on JLB Road. He said that as part of Crime Prevention Month, a series of programmes have been held at Lakshmipuram Station spreading awareness on crime, especially on women and children.

He said that women must be careful while walking on the roads and should not wear valuables when venturing out of homes. Criminals, especially bike-borne gangs, would target elderly women who wear expensive neck chains. “You might feel that you are safe by the side of the road. Actually, they lie in wait for victims and as soon as they get a chance, they will relieve you of the chain,” he explained.

Women walking by the side of the road are often targeted by chain-snatchers who will stop by them and ask for address. “They will be polite and very courteous. But as they will successfully divert attention by drawing to a deep conversation and will snatch valuables,” Venkatesh revealed.

Even at homes too valuables like gold jewellery must not be kept near the windows and at places from where criminals can easily take them. Always keep them in shelves or in a bag so that jewels serve their purpose and not end up in the hands of thieves, he advised.

Focussing on cyber crime and how criminals use bank data in phones to steal money from the bank. “Starting from Aadhaar OTP to the details of 16-digit debit card, CVV number, passwords and related confidential data, criminals will ask you to reveal the OTP or CVV number. If they gain access to the same, all your hard-earned money in the banks will vanish within seconds and once lost, money cannot be traced at all as criminals operate from different States and countries,” Venkatesh added.

Do not fall for calls that offer gifts from foreign lands. “Luring you with costly imported gifts, cash vouchers and the likes, scamsters will telephone you. If you fall for the trap, they will ask for money to get the gifts cleared from Customs Department which is fake. Many people have fallen victims to these men and women and have lost lakhs of rupees,” he said advising the people to approach the nearest Police Station in case they need to lodge a complaint or in case of being targeted by cyber criminals.