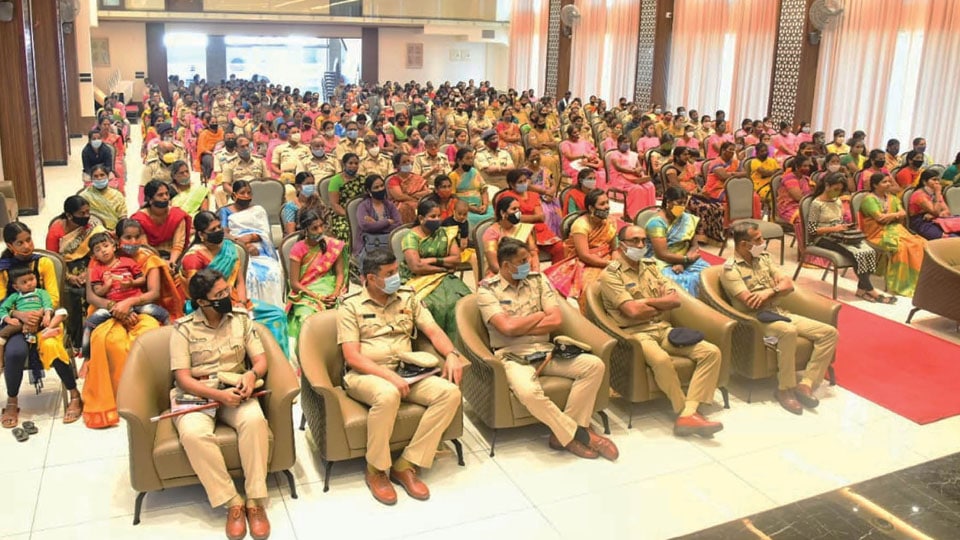 Mysore/Mysuru: As part of Crime Prevention Month, the Mysuru City Police have taken up several sensitisation programmes to ensure the welfare of women and also sensitise women on the well-being of fellow women.

While the intention of the programmes is to prevent crimes on women, the Police are also taking an opportunity to tell women that a woman’s safety can be ensured only if a woman understands the plight of another woman, her problems and her welfare.

“It has become a practice now-a-days to take every dispute to a court of law or a Police Station. Instead of this, warring families must come together and elders must sort out the issues. “There are bound to be differences in a family between a husband and a wife and between in-laws. Small differences must be ironed out in the initial stages instead of allowing the problem to fester. Families are being ruined because differences have been allowed to grow beyond proportions,” he advised.

Whenever a woman comes to a Police Station, her problems must be addressed first and initial justice must be delivered by the officers. Likewise, if a situation arises where the husband and wife can lead a good life after differences are sorted out, they must be allowed to do so, he said.

The programme was organised exclusively for the benefit of lady employees working in the Hebbal Industrial Estate. Over 100 employees attended the event.

Hebbal Inspector Cheluvegowda urged women to use interlock system instead of normal locks in houses and also install CCTV cameras for more safety. He also urged them to call 112 without any fear in case of any danger either while walking near house or at office or anywhere.                             Police teams will rush to the spot for assistance.

ACP Shivashankar informed that a lot of new laws have been enacted for the safety of children and women. “Complaints are received regarding abuse of girl children from close relatives but many times parents do not complain due to social stigma and to the fear of the family being exposed,” he said.