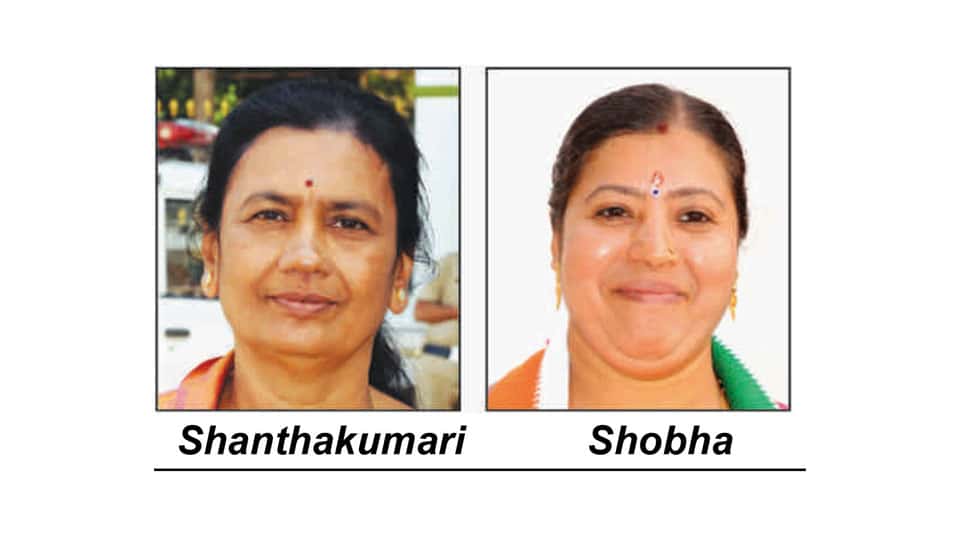 City almost certain to get a Congress Mayor

Mysore/Mysuru: With the JD(S) willing to let go the post of Mayor to its coalition partner (Congress) in the MCC after sealing a deal, the Mayoral election scheduled for tomorrow (June 11) seems to be only a formality as the Congress is almost certain to bag the post.

The election of a new Mayor was necessitated by the disqualification of Rukmini Madegowda of the JD(S) after her election from MCC Ward 36 was annulled by the Karnataka High Court on May 26. There is no change in the reservation matrix for the new Mayoral election. The Mayor post is reserved for Woman (General Category).

The Congress is expected to choose between H.M. Shanthakumari, who represents Ward 32 and Shobha Sunil, who is elected from Ward 61.

Shanthakumari, a senior Congress Corporator, who had served as the Deputy Mayor in 1995-96, is said to be the front runner for the post. However, Shobha Sunil too is trying her best by garnering support from local party leaders and other people’s representatives.

Meanwhile, KPCC Working President R. Dhruvanarayan, who is also a former MP, said that the Mayoral candidate will be declared by Opposition leader and former Chief Minister Siddharamaiah at around 8.30 am tomorrow, following which the candidate will file nomination.

Although, there are reports that the JD(S) and Congress have agreed on sharing of Mayor post for the remaining two terms of the current tenure of the MCC, the JD(S) will be holding a meeting of its Corporators and local leaders later this evening, to discuss strategy for ensuring the success of the ruling coalition in tomorrow’s polls.

The BJP, which is the Opposition in the MCC and which has never tasted success in the Mayoral election so far, too is meeting later this evening to fancy the party’s chances in case there is a break-up in the JD(S)-Congress alliance at the last moment.

The BJP had held a meeting of its Corporators and local leaders last evening and the strategy discussed there will be put forward in today’s meeting, which will be attended by the District Minister, MP, Party Legislators from Mysuru and other top leaders.

Despite having little hope of forming an alliance with the JD(S), the BJP is reportedly making last minute efforts to woo the JD(S) to its side and thus bag the Mayor post, which has eluded the party all along.

Ahead of Mayoral poll, MCC had made COVID test mandatory for all the partakers in the poll, including  MCC Corporators, MCC staff, poll officials and media persons, as a precautionary and safety measure. Accordingly, a total of 154 partakers underwent RT-PCR test on Tuesday. The reports came out on Wednesday, according to which two male staff have tested positive while all others tested negative. The election will take place at  12 noon  tomorrow.