Home » Columns » Abracadabra By K. B. Ganapathy » Remembering Sholapurkar, The Builder of CAVA 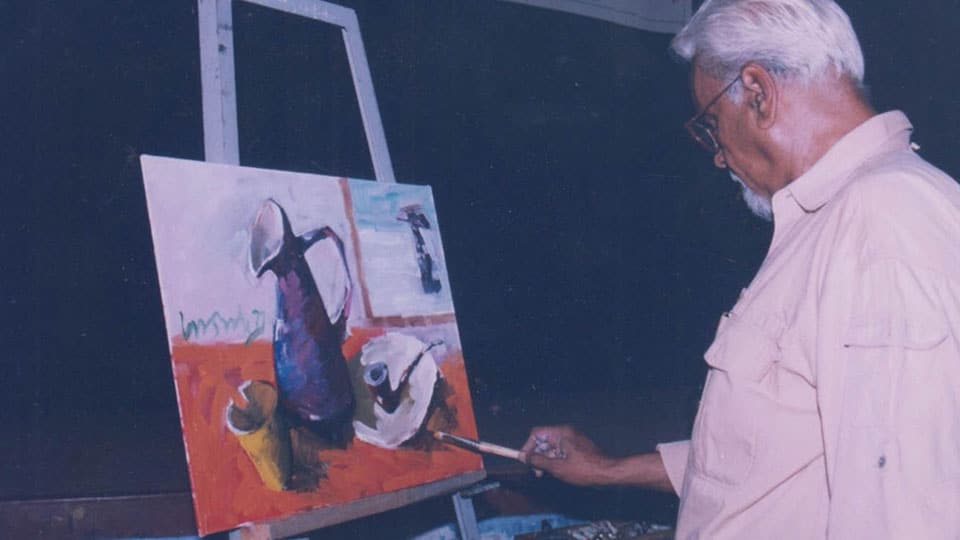 Remembering Sholapurkar, The Builder of CAVA

About creative dancers it is said that during the performance the dancer disappears, only the dance remains. The same feeling could be expressed about Prof. V.M. Sholapurkar, the painter-artist who passed away on June 8, 2021 in our city. He was such a great art teacher and a versatile, creative artist, I am sure, though he has disappeared from amongst us physically, his works of art and the institution CAVA he helped establish will remain with us.

I knew Sholapurkar from 1982, the day he landed in Mysore to establish CAVA — Chamarajendra Academy of Visual Arts, a successor institution to that old glory of the days of the Maharajas, the Chamarajendra Technical Institute (CTI), an iconic centre for arts, sculpture and making furniture. All the rich and the famous would get some exclusive furniture made of Rosewood, Sandalwood or Teakwood from here. It produced many big names in these fields of creative activity. I remember one M.J. Shuddhodana, who was, I guess, the Superintendent of CTI and also a great painter. It was located in the upstairs of the Cauvery Arts and Crafts Emporium on Sayyaji Rao Road, opposite the K.R. Hospital, while the Carpentry and Sculpting Departments were in the ground floor. Sadly, its glory was fading due to politics of the democracy and Carpentry and Sculpting Departments were closed, as I know. The Arts Department, however, remained there as an apology.

It was at this time the then Government headed by R. Gundu Rao as Chief Minister, decided to revive CTI with a new vision compatible with the changing world of art. To achieve this goal, Gundu Rao managed to get the best suited person in the art field and narrowed down on Prof. V.M. Sholapurkar, who was teaching at Sir J.J. School of Art, Bombay, with many feathers to his cap as a best teacher and had won national awards for his works.

His choice was welcomed by many and from day one he was a pro-active Head of CAVA. He gathered a team of creative faculty that attracted students and conceived of a curricula that matched that of what was taught in Sir J.J. School of Art, Bombay, India’s pride of an art institution. At a time when everything looked good for the future, trouble seemed to brew — the good idea of shifting the CAVA to a new place had led to protest by students who said the new place, the famous Writers’ Home at Yelwal (Aloka Palace, the pillared, imposing hunting lodge of the Maharaja) was too far from city. In fact, it was an ideal building with a vast area of land amidst verdant greenery. But, students and politicians won. CAVA, which was shifted here, was shifted back…! The good Professor Sholapurkar, for all his innovative ideas and development of CAVA in the right direction, was even accused of some impropriety that followed an ‘inquiry’ which showed him innocent. But, he was a sad man.

Now, CAVA, which was in too small a place and too old a building, has been shifted to a godown-like building on Bannur Road near Siddarthanagar. No architectural marvel for an institution of creative art. No creative idea will ever blossom under the roof of such a building.

Be that as it may, Sholapurkar’s greatest disappointment was that he was not able to take CAVA to greater heights as visualised by him. By the way, the name CAVA was his creation and one can say it is quite eponymous. There were so many hurdles from the vested interest groups — private art schools, including Bengaluru’s famous Chitrakala Parishath headed by a very influential person and artist M.S. Nanjunda Rao, its Founder — that prevented Sholapurkar in realising his dream of making CAVA an iconic, autonomous institution of all-India fame and later an Art University. Now it is the Mysore University that gives the degree certificate.

I asked Ganjifa Raghupathi Bhat, city’s well-known artist and National Award winner, for his thoughts on Sholapurkar. And he had the following to say: He was a contemporary and modern artist. But he had immense interest in Bharatiya art. It was he who brought in the period of change in creative art in Mysore. He was the pioneer in creating terracotta jewellery — necklace, ear rings etc.

Another city artist N.B. Kaverappa said that Sholapurkar was an innovative artist, who had exhibited his works in Kaverappa’s Bharani Art Gallery in Mysore. He said Sholapurkar had taken the wood inlay works to a newer height by using the original colours of the trees for his inlay works. Unfortunately, his dream of bringing CAVA to the level of Sir J.J. School of Art could not be realised due to lack of co-operation and support from the Government.

I also spoke to one of Sholapurkar’s students in Mumbai, artist Vasudev Kamath, who had come to Mysuru sometime back and met Sholapurkar in his house. He said Sholapurkar was a most loved teacher to his students and gave them maximum freedom which helped to give expressions to their creative potential.

Surprisingly, it was Gundu Rao, as Chief Minister, who brought in Sholapurkar in 1982 assuring to make CAVA an autonomous body. But bureaucratic impediments were so strong, even Gundu Rao could not defy them. Sholapurkar served from 1982 to 1988. But as a true artist, born to live a life of an artist, he continued to pursue his life as an artist experimenting new avenues as mentioned earlier.

I had an occasion to avail his services as an artist when I approached him in the year 1993 to design the cover for my book “America – An Area of Light” and he was too glad to oblige. The design is produced below. When I asked him his fee, he simply smiled and said, ‘don’t embarrass me.’

In his passing away, our city, nay the art world, has lost an artist and more importantly an art educator. RIP Sholapurkar.