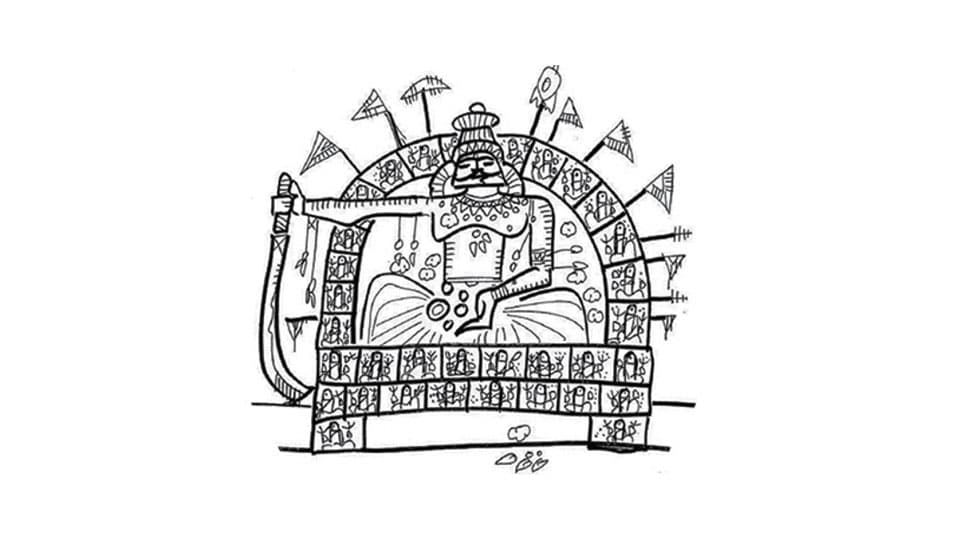 About a thousand years ago, a collection of Sanskrit tales, known as ‘32 tales of the throne’, came into being to draw attention to the qualities of a good king. In the narrative, king Bhoja finds the throne of legendary king Vikramaditya but every time he tries to sit on it, the throne asks if he is worthy. Whether he has the qualities of Vikramaditya, who was given the throne by the Gods.

It seems the most important character of a king is generosity. Of the 32 stories, 18 stories refer to the king’s ability to give away fabulous gifts without hesitation. He gives away fabulous treasures gifted to him by Gods, hermits and goblins that can give gold, food, youth — even cure all ailments. He gives them away to poor brahmins, clumsy courtiers, impoverished merchants, failed kings, compulsive gamblers, lost travellers, even enemies and strangers. He is able to give these away as he is not attached to his wealth or his success and feels wealth needs to flow.

The next important quality is bravery — the ability to face any situation without fear. We find these in half the stories. He is ready to offer his head to a Goddess in order to help hermits, architects struggling to fill a lake and even broken statues. He fights demons to save cursed unchaste women. He is willing to jump in a pot of boiling oil to help a young man marry the cruel Princess he loves. He is eager to meet sages atop steep mountains, enter dark caves infested with all manner of beasts, travel to the scorching land of the sun and the darkest of subterranean regions.

The third quality is magnanimity. He forgives easily and does not judge. He does not look down upon wastrel sons, jealous kings, rivals, unfaithful wives, cruel demons, foolish merchants, manipulative sorcerers or greedy brahmins. A sorcerer once asks him to fetch a vampire from the crematorium with the intention of turning the vampire against Vikramaditya himself.

Vikramaditya outwits the sorcerer by getting the vampire to work for him, but then forgives the sorcerer ultimately. A king is so jealous of Vikramaditya that to match his generosity he immolates himself every day to secure gold from witches. Feeling sorry for him, Vikramaditya offers to immolate himself, earning the admiration of the witches and the jealous king.

But the king does not seek glory. He travels as a commoner as he has no need for the symbols of kingship to get the respect of people. He loves to delegate and so spends half the year as king and the rest of the year, talking to hermits and travelling through strange lands, going on adventures, expecting his courtiers to do a good job in his absence. He appreciates talented people and rewards them handsomely, thus ensuring all talented people come to his court and contribute to the prosperity of his kingdom.

For him kingship is not about glory for himself; it is about helping people. He is motivated not by personal glory but the happiness of his subjects. He is even willing to fight the stars and planets when astrologers tell him the alignment of celestial bodies does not favour his kingdom. He enjoys his royal life, entertaining himself with music and dance, only after having done his daily duties in the court, in the battlefield and in the temple.

When he learns of a young man called Shalivahan who is destined to kill him, he challenges the boy to a duel. This potter’s son has the blessings of the snakes. He can bring clay toys to life and get serpents to fight for him. Vikramaditya has weapons to resurrect dead soldiers and to invoke eagles to fight serpents. But he decides not to use his powers and come in the way of Shalivahan’s destiny. For he is old and Shailvahan is young. Like a good king, Vikramaditya knows that he is not immortal and so plans to make way for the next generation.