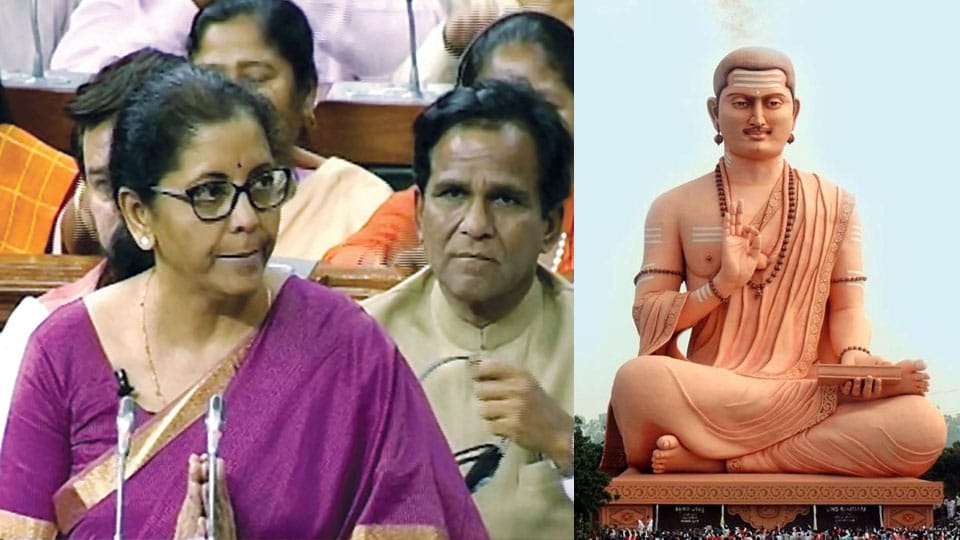 New Delhi: While presenting the Union Budget 2019, Finance Minister Nirmala Sitharaman referred to Lord Basaveshwara and his teachings a couple of times during the speech. The Union Minister invoked Basavanna’s principles and said, “Our government recognises and follows the teachings of Lord Basaveshwara who preached Kayakave Kailasa. Lord Basaveshwara was 12th-century social reformer and thinker who first established the concept of Kalyana Rajya or Welfare State. His thoughts ushered in a new revolution in the Indian society, sowing the seeds of modern concepts of Sarvodaya (universal upliftment) and ‘total revolution’. He argued for a position and status of all citizens irrespective of class, caste, creed and sex.

Basaveshwara was born in 1131 AD in a Brahmin family at Bagewadi, currently in Karnataka’s Vijayapura.  His parents were Madiraja and Madalambike. At a young age, Basaveshwara sought to achieve spiritual bliss and transform himself, denouncing the sacred janeu (janivaara) thread. Basaveshwara, worked closely with King Bijjala in Kalyana, later becoming the Prime Minister of Bijjala. After observing the socio-economic problems,  he led the Vachana (poetry) movement, focusing on the welfare of all and revolting against the social malpractices. He also raised his voice against the gap between rich and poor, untouchability and discrimination against. Basaveshwara also gave the famous twin socio-economic principles of Kayaka and Dasoha. Kayaka refers to removal of all economic, social and religious inequalities while Dasoha refers to equal opportunity. He said that an individual should be able to take up a job of his choice without discrimination in professions.

Earlier this month, PM Modi also referred to Lord Basaveshwara in a tweet:  “Paying homage to the venerable Bhagawan Basaveshwara on his Jayanti. An iconic thinker and pioneering social reformer, Bhagawan Basaveshwara worked throughout his life to make our society more inclusive. His emphasis on education and serving the poor continues to motivate millions,” he wrote.