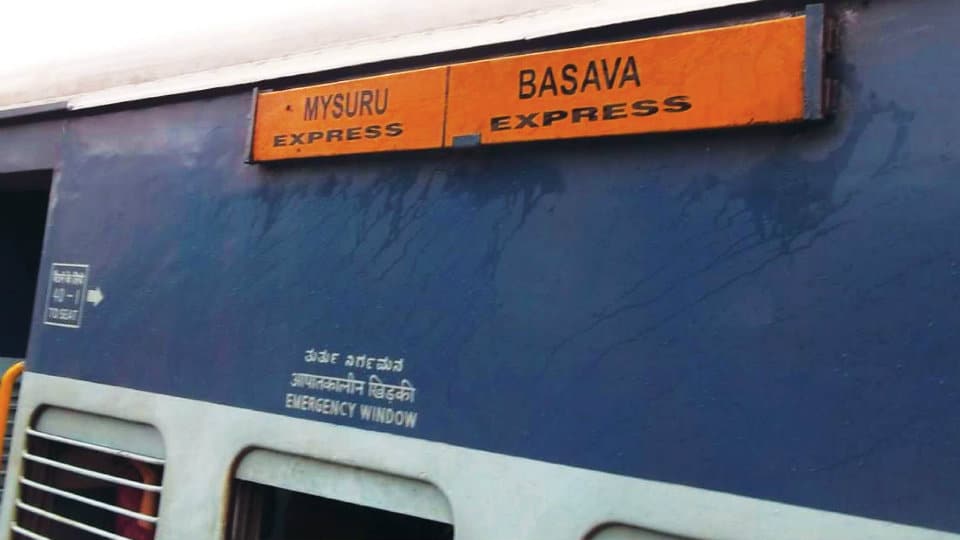 Mandya: Train traffic between Mysuru and Bengaluru was disrupted yesterday afternoon as a eucalyptus tree fell and damaged an overhead electric line between Maddur and Hanakere Railway Stations in Mandya. Due to this, Mysuru-bound Basava Express and Malgudi Express were delayed by a couple of hours putting passengers into  inconvenience.

The incident occurred at around 12.40 pm when Basava Express suddenly stopped at Somanahalli (between Maddur and Hankere). The train had left Bengaluru at 11.15 am and an alert gate man had spotted the tree fall and the damage it had caused to overhead power cables. He immediately alerted the loco-pilot on Basava Express. Later, Railway and electric workers cleared the tree and restored the power supply and the train started its journey at 2.30 pm.

Railway officials said that while traffic in both directions between Mysuru and Bengaluru came to a standstill for a couple of hours after the incident, traffic from Mysuru towards Bengaluru was resumed on one line. Traffic along the route from Bengaluru to Mysuru resumed later but only diesel trains were able to run up to 9.30 pm as the electric line was yet to be restored.

Officials from Bengaluru Divisional Railway said that following the tree fall alert, Basava Express was stopped and a diesel locomotive was taken to the spot and the Basava Express resumed its journey after 84 minutes. Chief Public Relations Officer of South Western Railway, E. Vijaya said that because of strong winds, the tree had fallen on the overhead electric alignment at Somanahalli that feeds power to electric trains.

The Malgudi Express, which departed Bengaluru two hours behind schedule, also had to face the same situation. When the train was nearing Mandya, another overhead power cable snapped near Hanakere at 4.11 pm. Here too, officials summoned a diesel engine from Mysuru and ensured the train’s departure. However, the train was delayed by one hour.

Electric trains along the route which were detained and suffered delays were Mysuru-Bagalkot Express, Bengaluru-Mysuru Malgudi Express, Bengaluru-Chamarajanagar Express and Chamundi Express. As the power disconnects automatically once the cable snaps, no untoward incident was reported. However, a child travelling in the Basava Express fell ill and was shifted to the Hospital in a private vehicle.

Later in the evening, a problem was detected in the locomotive of Rajya Rani Express that left Mysuru at 2.30 pm. The train came to halt soon after leaving Nayandahalli at 4.57 pm. Due to this, Kacheguda Express, Golgumbaz Express and Mayiladuturai Express had to be detained for some time.