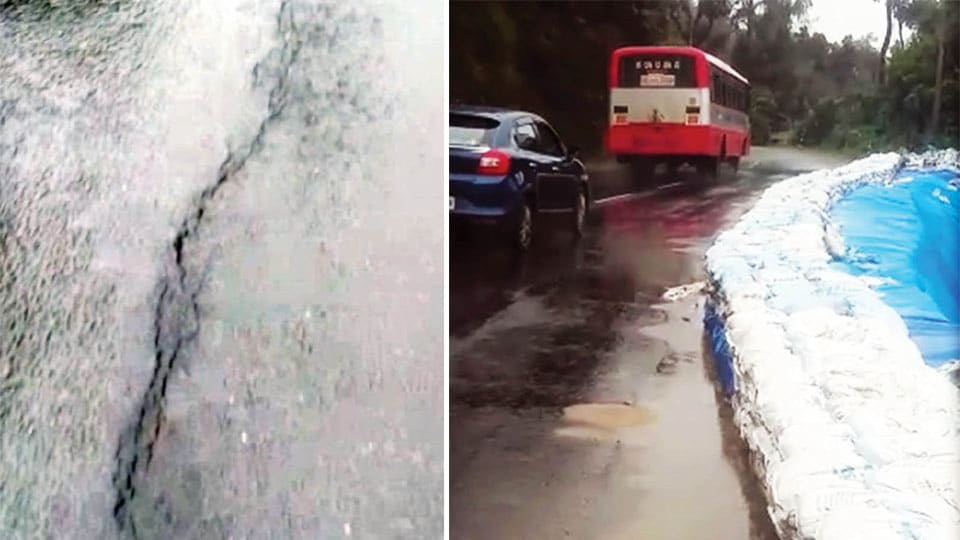 Madikeri: Monsoon has picked up in Kodagu and as an indication to heavy rains that has been lashing the district since the last couple of days, the Madikeri-Mangaluru Highway has seen cracks — a sad reflection of the quality of road repair works that was carried out last year following heavy rains and landslides.

Last year, officials had claimed that after repairs, the Highway could withstand rains for at least three years. Sadly, the road has developed cracks only a few months after it was repaired.

The cracks were observed on the National Highway-275 between Thalathmane and Katakeri. Locals said that the road was repaired only a few months ago and in all likelihood, the road will collapse on the sides if it rains heavily.

Madikeri Rural Police have erected barricades and boards have been put up warning the motorists of the impending danger.

The National Highways Authority of India (NHAI) Office in Mangaluru has been informed and a team of officials is expected to inspect the damaged portions today.

The District Administration will take a decision based on the feedback given by NHAI and engineers.

Much ahead of the beginning of monsoon, the District Administration had banned the plying of trucks that weigh more than 16 tonnes on this road as a precautionary measure.

Local villagers have alleged that instead of taking up full-fledged road works after last year’s landslides on this crucial road, the officials took up temporary works like placing sand bags on the side of the road so that the road does not collapse. This shoddy work has resulted in the road developing cracks in just a few months, they alleged.

Locals feel the soil under the Highway has loosened due to gushing in of rain water from either sides of the slope. The absence of side drains on either side too has led to the development of cracks on the road.

It may be recalled here that buses and heavy vehicles had been barred from plying on this stretch in Kodagu last year after the road developed cracks. Cars and two-wheelers had been allowed on one portion of  the road.