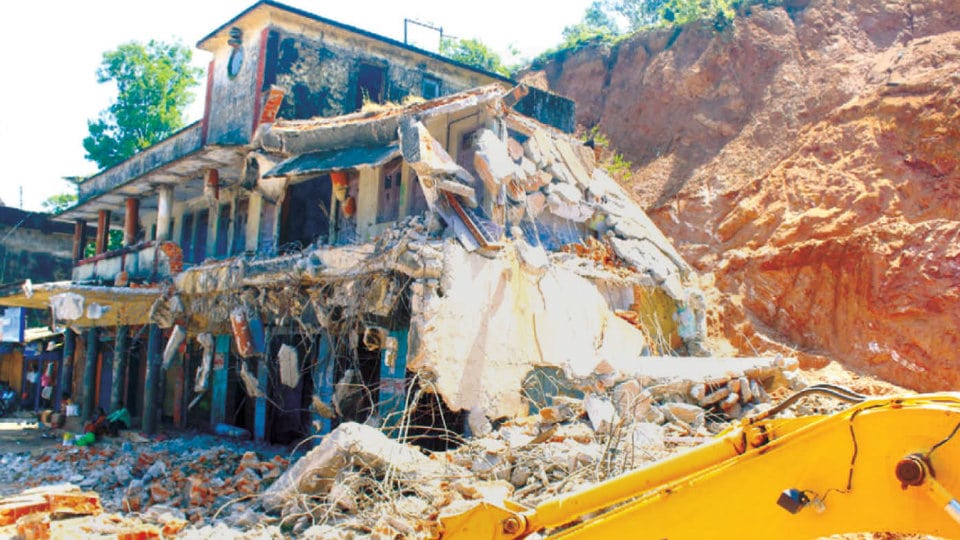 Madikeri: Taking note of suggestions made by Star of Mysore Editor-in-Chief K.B. Ganapathy in his column ‘Choomantra,’ published in Mysooru Mithra, sister concern of Star of Mysore on Nov.1, Kodagu District Minister S.R. Mahesh, who is also the Tourism Minister held a meeting with officials to chalk out a plan to construct a tourist-friendly park and an attractive fountain at the place where old Madikeri Private Bus Stand existed. The Madikeri City Municipal Council has plans of constructing a commercial complex here.

In his ‘Choomantra,’ Ganapathy had proposed the construction of a Public Square instead of building a commercial complex at this centrally-located place. He had said that a compound wall could be built around the open space and the area can be utilised for tourists and locals to take a small walk, sit and relax so that they can spend some quality time.

Taking note of the suggestions, S.R. Mahesh proposed similar ideas at a meeting attended by the DC, City Municipal Commissioner, Chairman and other officials. Mahesh said that it was not feasible to construct a commercial complex at the old private bus stand as the population of vehicles had increased which may result in parking issues and frequent traffic snarls.

“With all these problems, how is it possible to construct the commercial complex at the place which is already congested,” he questioned. He instructed the officials to prepare a blue print for construction of a park and fountain.

But before demolishing the old building, the City Municipal Council had prepared a blue print for the construction of commercial complex which met stiff resistance and the construction was opposed by many including from Madikeri Kodava Samaja President K.S. Devaiah, who suggested to leave the place empty.

In his article, K.B. Ganapathy had also mentioned about Trafalgar Square at the centre of London city and had mooted the idea of a Public Square at the old private bus stand space in honour of  India’s first and one and the only Commander-in-Chief Field Marshal K.M. Cariappa who is from Kodagu.

DC P.I. Sreevidya said that Minister Mahesh during the meeting discussed about preparing a plan for a tourist-friendly project at the old private bus stand. A final decision is yet to be taken in this regard. A meeting would be held in the coming days to decide about the plan, she said.

City Municipal Council President Kaveramma Somanna said, “At the meeting, Minister Mahesh has mentioned about the article written by Ganapathy in Mysooru Mithra. The Minister said that a meeting would be convened shortly to discuss about it.”