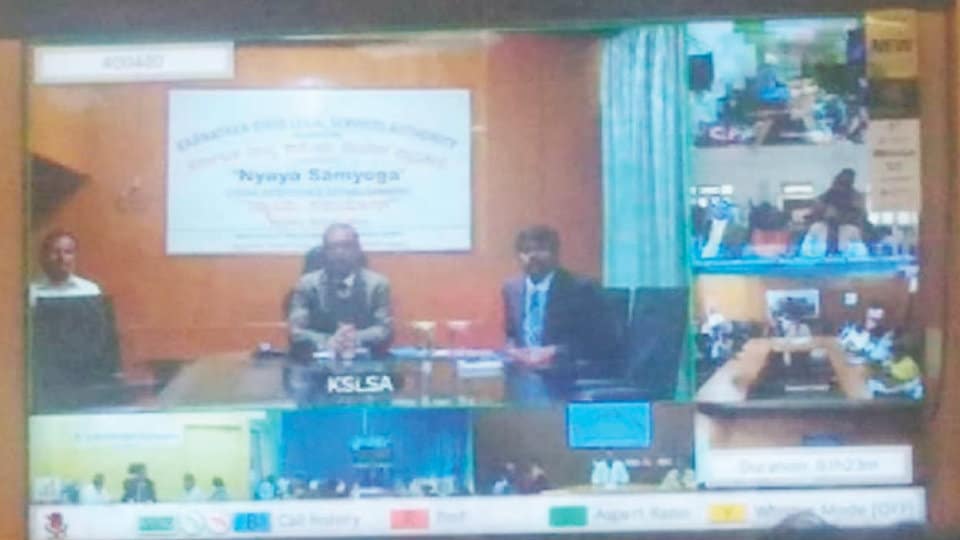 No Advocates, no Court fee at Permanent Lok Adalat

People can avail 9 services free of cost; cases to be settled amicably in consultation with parties

He was addressing a press conference at Karnataka State Legal Services Authority Hall at Karnataka High Court which was beamed at all District Courts including Mysuru yesterday.

The Permanent Lok Adalat is established under Sub-section (1) of Section 22 B of Legal Services Authorities Act of 1987. It has been established with the intention to settle the dispute of public utility services like transport service for the carriage of passengers or goods by air, road or water, postal, telephone service, supply of power, light or water to the public by any establishment, system of public conservancy or sanitation, service in hospital or dispensary and insurance service.

The dispute includes any service which the Central Government or the State Government, as the case may be, in public interest. “Every Permanent Lok Adalat established for an area consists of a Chairman who is a retired District Judge and two members having adequate experience in public utility services,” he said.

The award or a decree of the Permanent Lok Adalat is final and binding on all the parties and the jurisdiction of the Permanent Lok Adalat is up to Rs. 1 crore. The Lok Adalat may conduct the proceedings in such a manner as it considers appropriate, taking into account the circumstances of the case, wishes of the parties like requests to hear oral statements, speedy settlement of dispute etc., Hanchate Sanjeev Kumar said.

The Permanent Lok Adalat will take a minimum of one month to a maximum of three months to conduct the trial and deliver judgement which will be binding on the parties. Sanjeev Kumar further said that there is no need for advocates to argue in the case and parties may submit the petition in a white sheet.

“There is no need of paying court fees and parties can argue the case themselves. The focus of Permanent Lok Adalats is to settle the disputes amicably and in an impartial manner. If the opposite party does not agree with the verdict and if any one party abstains from attending the Court, the case will be decided based on its merits,”  he explained.

“In Mysuru, there are over 2,460 cases pending in Permanent Lok Adalat and they are in the trial stage. The number of cases at Permanent Lok Adalat in Mysuru is the proof of awareness that is spreading among public. Cases here will be decided without depending on anybody’s intervention,” he added.

During the press conference that was aired at District Court, Mysuru District Legal Services Authority Member-Secretary B.P. Devamane was present.