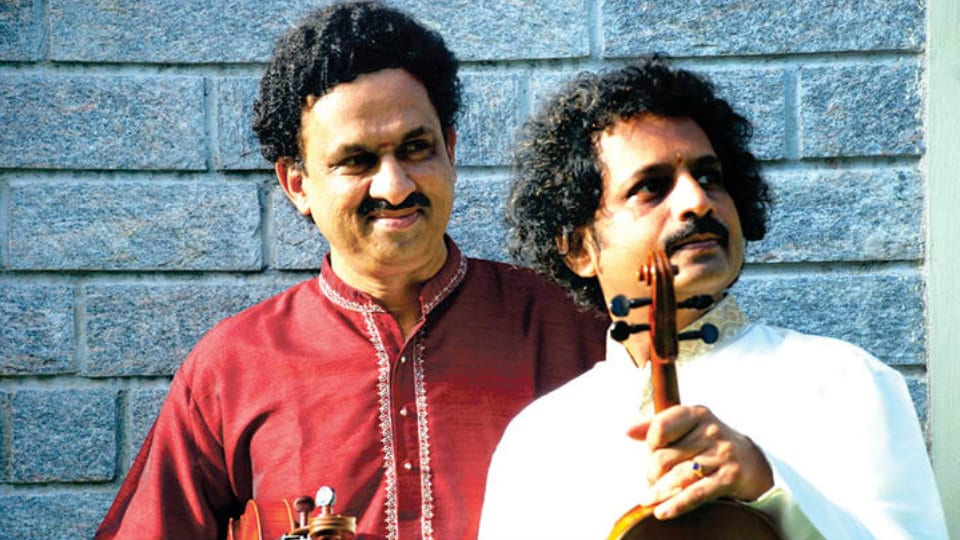 Come September, a lilting everlasting tune makes one sway and dance. This September, music-lovers living in the United States of America are set to sway and dance to the violin music of Mysore Brothers, Vid. Mysore M. Nagaraj and Dr. Mysore M. Manjunath who are embarking on yet another tour of the USA.

It may be recalled that Dr. Manjunath recently had the honour of performing the first ever Indian music concert at the coveted Oxford University and the Royal Palace of Milan.

Violin Maestros Nagaraj and Manjunath, the musical ‘Princes of Mysore’  as they were fondly called by Bharat Ratna Pandit Ravishankar, are sons and disciples of Vid. Mysore Mahadevappa and as child prodigies stormed the music world and are continuing to do so with their amazing talent and extraordinary musical virtuosity.

The amazingly gifted and dedicated violinists of today are going to be performing in multiple venues spread across the continental USA during the month. One scheduled concert which has the Brothers excited is the one to be held in connection with [email protected] celebrations organised by the Embassy of India in Washington DC.  A few other prestigious venues which are all set to be enthralled by the lilting violin music are the Rubin Museum of Arts in New York, World Bank, a workshop and concert at the reputed University of North Texas. There are many others included in the hectic itinerary of the Violinist Brothers and the team — Vid. Patri Satish Kumar on the mridanga and Vid. Giridhar Udupa on the ghata.

North American audiences and students of South Indian classical music can eagerly look forward to be soaked in musical bliss and gain some insight into the nuances and niceties of our system of music in the academic workshops.

We wish the brothers, the true cultural ambassadors of India, safe travel and eagerly await their next concert in their hometown during the Dasara festivities.