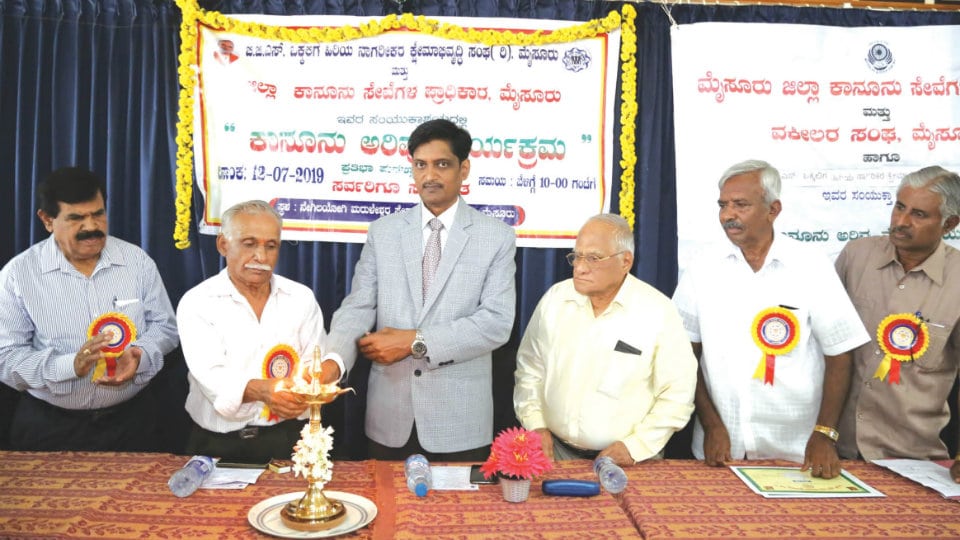 Mysuru:  Maintaining that the existence of Law & Courts have helped people live a peaceful life, District Legal Services Authority (DLSA) Member-Secretary B.P. Devamane has stressed on the need for everyone to follow the Law.

He was speaking after inaugurating ‘Kaanoonu Arivu – Neravu,’ a legal awareness aid programme organised by BGS Vokkaliga Senior Citizens Welfare Association in collaboration with the DLSA and the District Administration at Negila Yogi Maruleshwara Seva Bhavan in Jayanagar here yesterday.

Emphasising that obeying law alone would help a peaceful life, he underlined the role of the Law, Courts and the Police for the existence of a peaceful society.

Noting that in the absence of law, anything could happen, Devamane said that law is same for everyone, irrespective of their class or status.

Highlighting the need for consensing our nature for which there are relevant laws, Devamane advised the public to be also aware of forest, environmental and other such laws and engage themselves in conservation of our green cover, which is very vital.

Asking the people to get registration of births and deaths done in 15 days, he observed that not doing may pose a problem in the future.

He further said that the DLSA would extend all help to those who need legal assistance for redressal of their grievances.