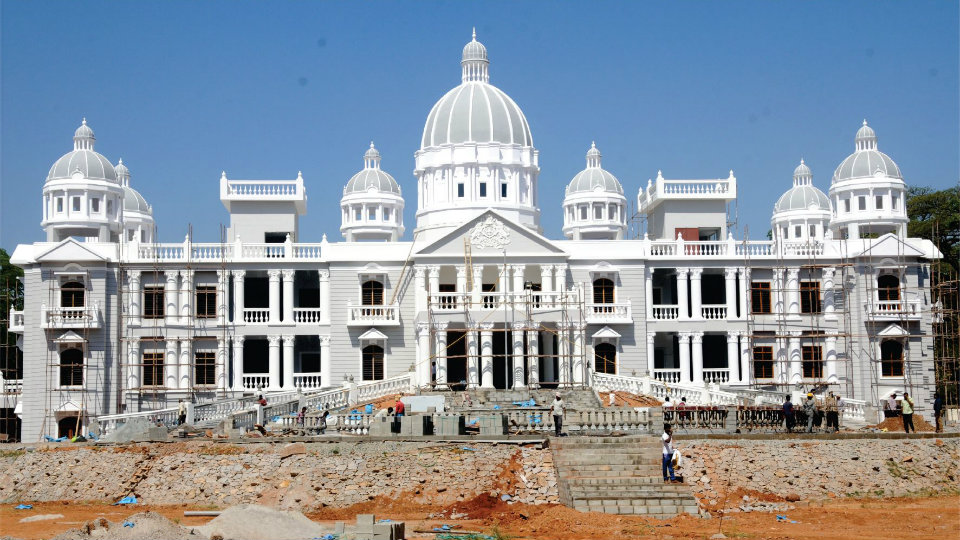 An Office for City Police Commissioner

Mysuru:  During his whirlwind tour of the district, Chief Minister Siddharamaiah is also scheduled to inaugurate the newly-constructed Office of the City Police Commissioner on Mirza Road in Nazarbad on Mar. 6 at 3 pm.

The new building, again built on the lines of Lalitha Mahal Palace architecture keeping in mind the heritage character of the city, will cater to the infrastructure needs of Mysuru City Police till over the next 25 years. Once the new Office is inaugurated, the old Office, also in Nazarbad, will be handed back to the Mysore Police Band from whom the building was taken.

Colouring has been planned in such a way that they are not jarring. White and grey paints have been used to reflect the royal character. The painting of the building has been completed and workers are giving final touches to the welcome arch that has been constructed on Mirza Road.

Construction works of the new building began in June 2014 at a cost of Rs. 16.76 crore and Karnataka Police Housing Corporation is in-charge of the construction. The actual works were implemented by Bengaluru-based Krishna Shelter that is developing the infrastructure.

The Automated Traffic Enforcement Centre is also expected to function in the new building, which is likely to have a control room to monitor CCTVs installed at strategic locations across the city.