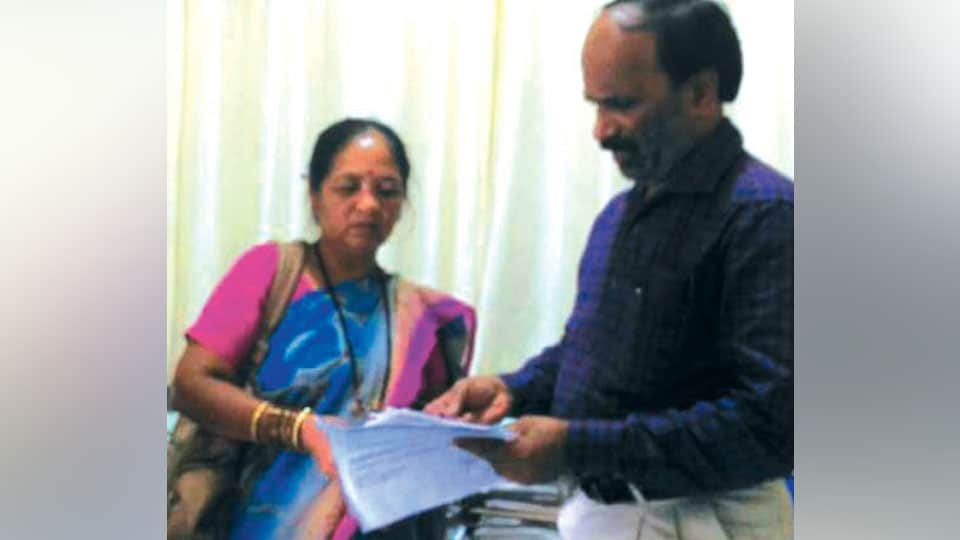 Mysuru: Food and Civil Supplies Senior Deputy Director Dr. K. Rameshwarappa, playing the role of a good Samartin, this morning helped a woman from a nomadic hamlet in Hunsur taluk, get a BPL card to avail free treatment for her husband, who is admitted to Jayadeva Hospital to undergo angiogram procedure.

The nomad woman, identified as 50-year-old Mallika and her husband 60-year-old Hindar Raj of Nallurpatna hamlet in Hanagodu hobli, Hunsur taluk, came to city get her husband admitted to Jayadeva Hospital as he had some cardiac problems.

As Jayadeva Hospital provides free treatment to BPL card holders, Mallika gave the BPL card to the hospital staff for entry and when the staff verified the card, they found that the card was suspended as Mallika had not linked her Aadhaar Card number to it and the hospital staff said that they could not provide free treatment without a valid card.

Perplexed, as the cost of the treatment could run into lakhs of rupees, she rushed to the office of Dr. K. Rameshwarappa, which is located in the Deputy Commissioner’s office building here and narrated her problem to the Senior Deputy Director.

Dr. Rameshwarappa, immediately called the Gram Panchayat (GP) Officer concerned. He then instructed the GP official over the phone to take his (Dr. Rameshwarappa) staff along with necessary equipment to take the fingerprint of Hindar Raj who is admitted in the hospital, upload the same in the official website, do the necessary follow-ups and issue a new BPL card to Mallika at the earliest. He informed Mallika that she would get a new card by this evening or by tomorrow afternoon and said that he would speak to the doctors at Jayadeva Hospital to carry on the treatment and would personally produce the BPL card to them.

This gesture of Dr. Rameshwarappa has helped a poor nomad woman avail free treatment for her husband at Jayadeva Hospital here. More such officers are needed in various Government Departments so that the poor would not be turned away for some mistakes in documents but help them to get valid documents to avail facilities on time.