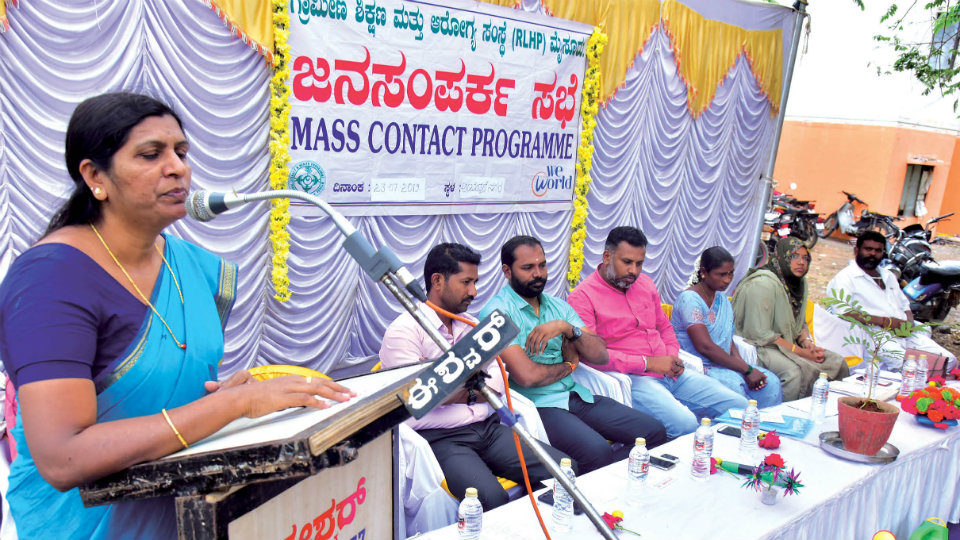 Ambedkar Nagar residents fume as they pour in complaints

Mysuru:  Complaints poured in from the residents of Ambedkar Nagar near the VTU College on Outer Ring Road, at the Mass Contact Programme (MCP) organised by the Rural Literacy & Health Programme (RLHP) here on July 23.

The MCP was organised for the residents where the houses have been built by the Slum Development Board under NURM scheme, to discuss the problems in their area with the officials of various Departments. They had gathered in large numbers to air their grievances. However, the unpleasant part was the absence of the officials at the programme organised by RLHP.

The work that was needed to be done by the Government officials was being done by RLHP. The idea of organising the mass contact programme was to bring the problems of the residents to the notice of the officials and for them to address the issues. The residents were furious that the officials did not even have the courtesy of attending the meeting and listen to their problems.

Hence, they brought the problems they were facing to the notice of the Hanchya GP Vice-President and the Members. However, President R. Manju and others explained to them the limitations they have as they had to work only in their jurisdiction.

Manju and Member N. Jayanna, who spoke said that Gram Panchayat could not take up the development work in Ambedkar Nagar as it does not have the administrative powers over it.

However, along with the grants if the responsibility is handed over to the  Panchayat then they could take up the development works.

But the Slum Board has not transferred this region to the Gram Panchayat and on the other hand, it has not even handed it over to the Mysuru City Corporation (MCC). Hence, the residents of the area are in a tricky situation. The position can improve only if the process of handing it over to Gram Panchayat is completed, they explained to the irate residents.

RLHP Director Saraswathi said that her organisation was aware of all the problems of the area. Hence, this MCP was organised by inviting the officials to discuss with the residents their problems. But efforts went in vain, she added, objecting to the absence of the officials.

She said that her organisation would lead a team of leaders to meet the Mysuru Deputy Commissioner after discussing all the issues.

Even the residents must maintain cleanliness in front of their houses and not throw garbage around and also protect their health, she advised.

Resident leaders Ganganna Shigli, Naushad and others were present at the meeting.