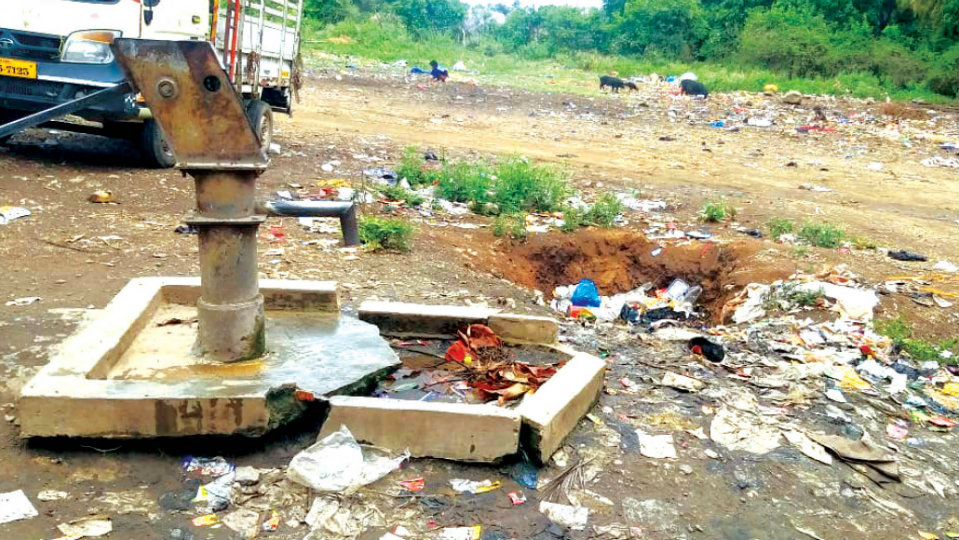 Is it possible to live in such inhuman conditions…?

Mysuru:  The whole place stinks as mounds of garbage is accumulated, plastic and waste is strewn all around, sewage water is flowing on the roads, it does not have an Anganwadi or its own school building. When one visits this place, the first question that arises in one’s mind is, “Is it humanly possible to live in such conditions?”

This is Ambedkar Nagar, just a few kilometres from the city. It is near the Ring Road close to Sathagalli and VTU College. The people living in this area are living in no man’s land as the place comes neither under the Mysuru City Corporation (MCC) or the Hanchya Gram Panchayat limits.

Nobody is listening to their tales of woes. One wonders as to what sins they have committed to be living under such sub-human conditions. Why are they being continuously neglected? This is what Star of Mysore Reporter who went in search for these answers found.

There are nearly 500 houses constructed under NURM (National Urban Renewal Mission) by the Karnataka Slum Clearance Board. Nearly 560 families with majority of them illiterates who are Dalits, belonging to Backward Classes and labourers, with a total population of around 2,000 are living here.

Though the Slum Clearance Board has constructed the houses, it has not provided them with any basic amenities. There are no proper roads, street lights, water facility with just one borewell for the entire community. A totally unhygienic and unhealthy condition prevails here.

Since the Government Primary School does not have its own building, the classes from first to fifth standard are run in a Community Centre. There are 48 girls out of 85 students and the classes are run in congested conditions. In one room, two classes are held. There is not even an Anganwadi Centre here, complain the residents.

The NURM houses are right in the middle of stagnant sewage water and it even surrounds the Community Centre. In this unhygienic condition, the children are forced to consume mid-day meals. The place is buzzing with thousands of flies and there is menace of pigs too. There are instances of children vomiting while having food.

According to School Head Mistress Mahajabeen, though they have urged for their own School building many times, it has fallen on the deaf years of the Slum Clearance Board officials. In spite of showing a place for the building through survey, the officials apathy is glaring, she told Star of Mysore expressing her disappointment.

Residents lack civic sense: Even the residents are responsible for this sorry state of affairs and the mess around them. They just do not have any civic sense as they throw the waste, plastic and other garbage carelessly all around the place. The place is stinking as the water is mixed with garbage.

This is having an adverse effect on the health of children and the families. But they are blissfully unaware of this. No one is even trying to create awareness about this situation among them, complain the leaders here. Hanchya GP does not earn a single rupee from Ambedkar Nagar. Then how is it possible for them to develop our place? asks one of the leaders Ganganna Shigli.

During elections the voters here go to Hanchya to cast their votes. But it does not have any connect with the Gram Panchayat as it does not come under its jurisdiction. There is not a single official who is responding to our problems, complain the residents with a great deal of anger and anguish in them.