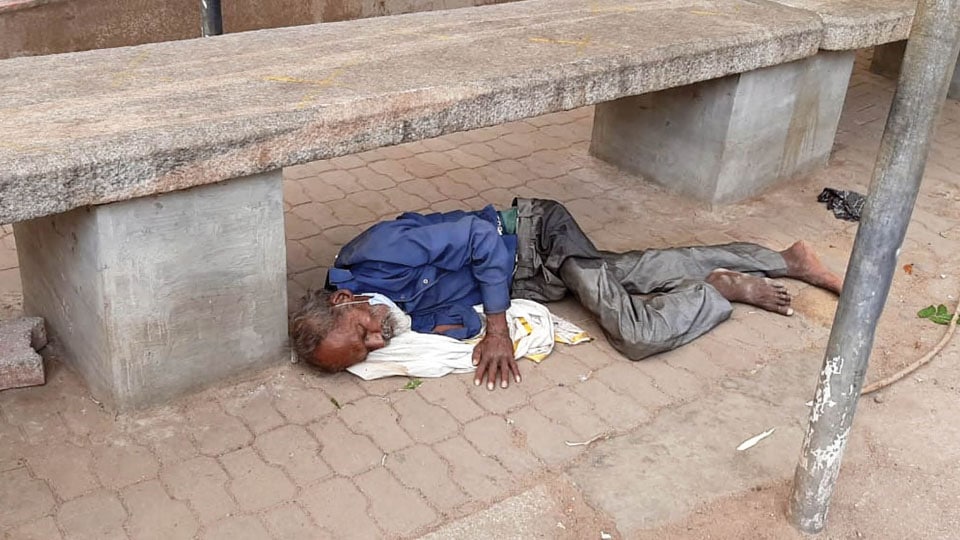 Old and ailing destitutes left to the mercy of God

Mysore/Mysuru: With no shelter for the aged and ailing senior citizens, the premises of century-old Krishna Rajendra (K.R.) Hospital, popularly known as ‘Doddaspathre’ in this part of Karnataka, has become a place to live and die.

It is a common scene to spot the aged people sleeping on the ground near various buildings inside the hospital premises. While patients inside the wards have doctors to look after, these destitutes have no caretakers and left to fend themselves. They eat only if some donors distribute food or else they sleep empty stomach gazing at the sky. The treatment of these unfortunate citizens have been stopped due to spike in Corona positive cases.

Speaking to Star of Mysore, Dr. Nanjundaswamy, Medical Superintendent, K.R. Hospital, said: “These people come to hospital premises hoping that someone might provide food to them. Despite telling them not to enter the hospital premises, they manage to come inside and sleep here. They should be shifted to Destitute Homes. It is the job of Police Department.”

When approached Mysuru City Corporation (MCC) officers to provide shelter for these aged destitutes at Nanjaraja Bahadur Choultry where the Corporation has facilitated for the stay of homeless people, they said that bed-ridden/ aged destitutes cannot be shifted here as there are no staff to take personal care of such people. Care-required destitutes should be shifted to shelter homes coming under Social Welfare Department or Women & Child Development Department as there staff will be available as care takers.

Reacting to this, Malathi, Joint Director, Social Welfare Department, said that the destitute home run by her Department will look after only beggars and healthy persons, but not old and infirm people who require constant medical treatment.

Attempts were made to reach out to the Officer of Department of Women and Child Development but the officer remained incommunicado.

Unfortunately, there is no separate home for destitute to take care of old and ailing citizens. With none to take care, they were left to the mercy of God. That was the reason why a majority of unclaimed dead bodies are found in Devaraja Police Station limits.

An old man was found dead in front of COVID ward in K.R. Hospital premises on Wednesday due to alleged starvation. It was said that the unidentified man had a deep wound on his leg but didn’t find a bed. So, with pain and lack of food, that person might have died, said a Policeman attached to Devaraja Police Station where an UDR case has been registered. The body has been kept in the morgue for identification. Kith and kin of the deceased, if any, may contact Ph: 0821-2418306.