Home » Feature Articles » Only Ganesha can save us! 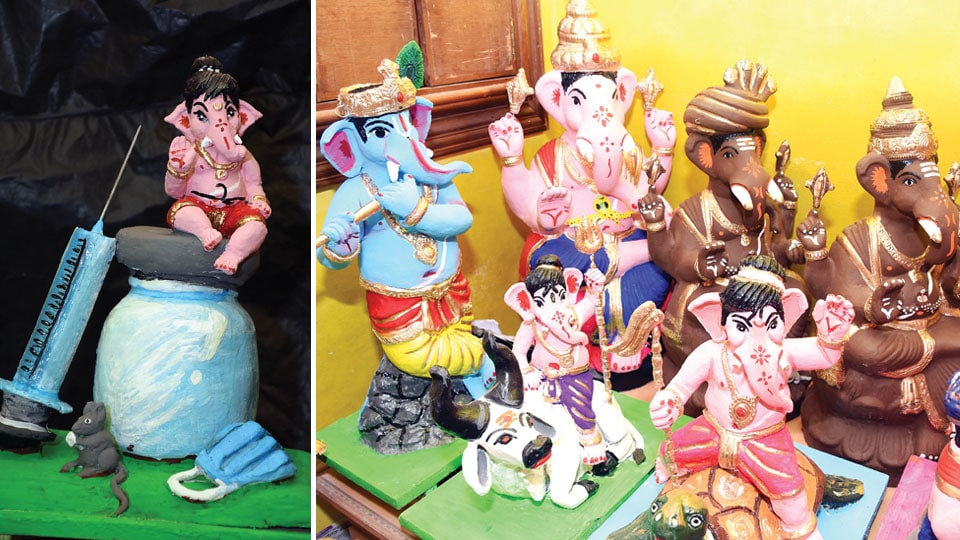 Only Ganesha can save us!

Every year, thousands of people visit various nooks and corners of the city around this time of the year. Several colourful Ganesha idols of different shapes, sizes and makes — for pandals, offices and homes — are lined up on every other road just before the start of the eleven-day Ganesh Chaturthi festivities (Sept.10 – Sept. 21).

However, after a lean season last year due to the pandemic and the lingering fear of a third wave now, the hustle-bustle is missing this year too. While the material cost for idol-making has increased by around 20 to 30 percent, the poor demand has put the idol-makers in a fix.

Many of them have stopped making fresh idols as there are hardly any buyers for the old inventory of idols.

While the earnings from one season are enough for most to sustain them for the whole year, lack of business last year has thrown several people into debts. And they are keeping their fingers crossed and praying for a miracle in the form of increased sales this festive season.

Ganesh Chaturthi is all set to begin from Sept. 10. Imposition of strict rules by the State Government on celebrating the festival has put the lives of Ganesha idol-makers on the edge. Many of them expressed their grief over not receiving any orders from even regular customers.

Idol-makers used to make 2,000 to 3,000 idols every year and this time the number has not even reached 100. Many blamed the State Government for not keeping up the promise of releasing COVID relief package of Rs. 3,000 to artisans, which was announced during the lockdown. Not even a single rupee has reached the artisans and has forced many to change their profession and they are doing small-time jobs.

Idol-makers have two types of clients, members of Hindu outfits who buy large Ganesha idols to be installed in public places and the general public who choose to install small idols at homes. This time the Government has restrained installation of Ganesha idols in public places and raising of pandals. Artisans are hoping that the State Government will revise the guidelines soon.

30 years into the profession & the tradition continues

READ ALSO  A home in the making...

Ningamma and D. Revanna, mother and son have been into the business of making Ganesha idols for 30 years on K.T. Street. Speaking to Star of Mysore, Ningamma said, “We used to make 1,000 Ganesha idols every year but this time we have made only 100 due to demand scarcity. We make idols of every size starting from 3 inches to 3 ft. We are left with no hopes that people will buy bigger idols. Our lives are dependent on this as we do not know any other work apart from sculpting.”

Revanna said, “We make all types of idols and no paper mould, plaster of Paris or fluorescence is used. All Ganesha idols are eco-friendly and will not pollute water. We are getting orders for smaller idols to keep at homes that are too few in numbers. The State Government just announced COVID relief packages for artisans but has not implemented it.”

The family that has been into idol-making since generations showcased a few special Ganesha idols. One can never imagine Lord Ganesha becoming a movie buff. Many Ganesha idols made by Yeshwanth have a filmy touch to it. Ganesha sitting on a scooter, wearing a colourful shirt and goggles reminiscent of Dr. Rajkumar from the movie ‘Eradu Kanasu’.

Sudeep-starrer and yet-to-be-released movie ‘Vikrant Rona’ too has taken the shape of Ganesha. The movie’s title was launched at Burj Khalifa. With the same concept, Yeshwanth has made a Ganesha standing in front of Burj Khalifa holding a torch in hand, same as the look of Sudeep in the movie. Not only just a filmy Ganesha, there are also idols of Ganesha by Yeshwanth creating awareness on physical fitness and COVID vaccines. The muscular Ganesha inside a gym, holding a dumbbell, having a 6-pack body is the eye-catcher.

It’s an ancestral gift, not a business…

READ ALSO  Proud... as a Peacock

A family residing on K.T. Street shared that they have been into idol-making since generations and they do not consider it as a family business but ancestral gift.

Shobha Mahesh said, “Our forefathers were artisans and it has continued till now. We don’t want to look at this as a business, even my children learnt on their own without taking anybody’s help. Every year we have been making more than 2,000 idols and since two years we have not made more than 500 idols. We request the State Government to provide financial assistance.”

Yeshwanth and Ravikumar, sons of Shobha Mahesh said, “Our family is involved in idol-making. Even I want to continue this tradition and pass it on to my children. We make different kinds of Ganeshas like the ones creating awareness on protecting our environment, COVID vaccines, body building and other novel ones. We also make special Ganesha according to the customer’s wishes.”

There is no demand for Ganesha (idol) as people are scared of him this time (laughing). I have not experienced a worse situation than this in half a century of my experience. I want to ask the State Government where the Rs. 3,000 COVID relief package is. We did not get any money and we do not know any other profession than idol-making,” said N.K. Sreenivas Murthy.

Shankramma said “My father-in-law was an idol-maker and my husband continued the profession. Now he also works as a labourer at Santhepet to make ends meet. I am taking forward the tradition of idol-making and since the last two years we are not getting orders. We are hoping for more orders three days prior to Gowri-Ganesha festivals. If not, will go through loss this year also.”

The then Chief Minister B.S. Yediyurappa announced COVID relief package but the present Chief Minister Basavaraj Bommai seems to have forgotten to implement it. Why is the Government ignoring us? Why has there been no financial assistance provided to us? Whom to be blamed? I request the State Government to permit installation of idols in public places,” Venkatamma said.