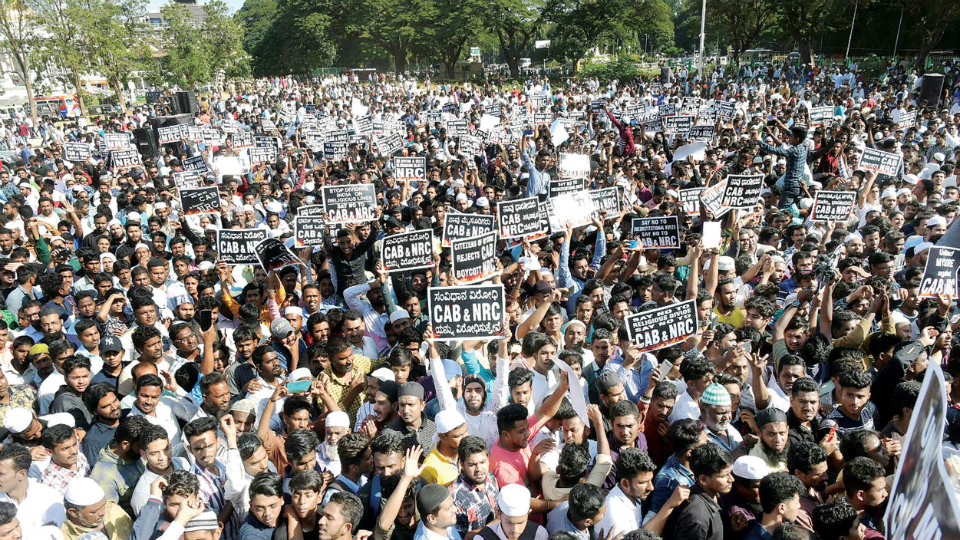 Mysuru: Even as protests against the Centre’s Citizenship Amendment Act (CAA) continues to rage across the country, here in the city, hundreds of people, under the banner of various organisations, staged a massive demonstration at Town Hall premises yesterday afternoon.

Addressing the protesters, SDPI State General Secretary Abdul Majid said that by introducing the unconstitutional Act, the Centre was attempting to drive out minorities from the country. Claiming that the Act was divisive, he alleged that the Government was threatening those who were speaking against it, through the provisions of the CAA. He urged the Government to withdraw the  Act at once.

The protesters, after staging the demonstration for about 20 minutes, dispersed from the Town Hall following an oral advice by the Police.

As hundreds of protesters gathered at the Town Hall at about 2 pm, the roads in the surroundings such as Ashoka Road, Old Bank Road, Sangam Talkies Road, Albert Victor Road  and Sri Harsha Road saw huge traffic jams for nearly an hour.

Most of the shops and commercial establishments owned by minority communities in Mandi Mohalla, Lashkar Mohalla, N.R. Mohalla, Udayagiri, Shantinagar, Beedi Colony and Rajivnagar, had voluntarily shut down in the afternoon as a mark of support to the demonstration.