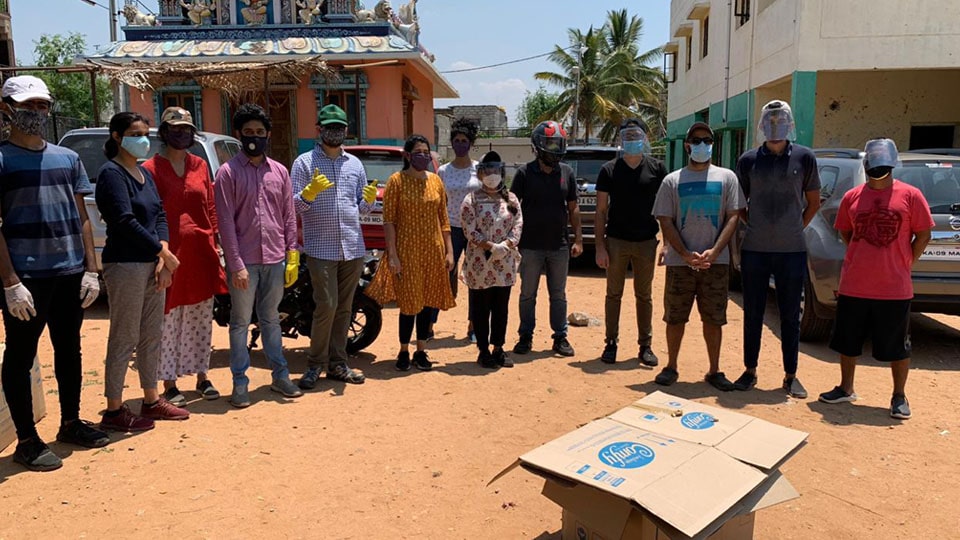 Charitable and sensitising social outreaches can be powerful positive statements in times of pain and anguish faced by the citizenry, especially the powerless masses of a nation like India. They instil hope with a soothing sense of optimism that there is a better tomorrow beyond hard times, such as ‘the times of Corona Pandemic’, endured like a war-time phenomenon.

They witness to the fact that the poor and the needy, particularly the poorest among the poor, who are often the hardest-hit during these times are NOT left alone, or remain disconnected from the mainstream.

In these outreaches, compassion stands out as an outstanding virtue inspiring dedicated NGO volunteers to outreach in their own unique ways, propelling them to take philanthropy to the doors of masses and building a humane rapport with them.

This was exactly what these two independent NGOs — Jain Samaj and Reachout India — had been doing since the unwelcome arrival of Covid-19.  I am personally aware of the dynamism, dedication and commitment with which they got involved in the social tasks ahead of them every day in those hard and haunting times in April and May, 2020. Their interventions were small and tiny like mustard seeds but the impact they have created in the lives of poor speaks volumes of what a difference, very different from what government agencies do, it could make when NGOs address a social predicament.

Jain Samaj, launched by Sri Sthanakvasi Jain Yuva Sanghatan, Mysore, under the guidance of Budhmal Bagmar, Rajan Bagmar, Manohar Sankala, current office-bearers of the Samaj, outreached as a dedicated team led by Navarathan Darla, the Project Director of the Samaj, who has a passion for reaching out to the poor, along with Deepak Bhora, Gautham Gandhi, YeshwanthMutha, Jamboo Lodha, Gautham Patwa, Sunil Patwa and Sanjay Kothari. The Samaj was in the forefront on war-footing since the first phase of the Covid-19 lockdown was announced in India.

With the help of contributions received from among friends and business men approached, the Jain Samaj has had an extensive outreach till date to almost all the areas where the voiceless poor live in and around the city, even reaching out to migrant labourers residing in the interior of Bilikere, Mahadevapura and Mandya, distributing thousands of boxes with basic provisions meant for two to three weeks for a family of four, feeding the hungry and the needy, and feeding cows and bulls too at Pinjrapole farmyard during varied phases of the lockdown.

Extensive field-visits and checks and verifications were done to ensure that the reach-out reached directly the poor and the needy. They did rope in a few politicians and Police officers wherever required but everything was carried out without any political speeches or paraphernalia, or publicity. Their outreach was marked with a personal touch and rapport that enabled the poor to understand and appreciate what it meant to be compassionate, caring for one another all the more during these trying times.

The other social outreach done by an NGO, christened as ‘Reachout India’, was led by Manasa Rao, a 24-year-old law graduate from the family of C.R. Hanumanth of DRC Cinemas, and Dr. Sagarika Nithyanand, a 28-year-old doctor from the family of Dr. N. Nithyanand Rao, a well-known Orthopaedic specialist from Mysuru. Both of them had an extraordinary perception of ground realities and a crystal clear vision of how to go about while addressing the concerns of the poor womenfolk.

Their reach-out was a unique one. They moved on sensitising the womenfolk living in slums, shanties, migrants’ colonies, and certain other areas not well cared for, with focus on ‘menstrual hygiene’, a fact of life that is often bypassed ‘as not to be spoken about in public’ as if it were a social taboo.

These youngsters were actively involved in a door-to-door mission distributing more than ten thousand menstrual hygiene kits with sanitary pads, bathing soap and hand sanitisers among daily wage and migrant womenfolk. Their prime focus was on young girls in their teens living in unhygienic conditions due to extreme poverty, who were more or less aware of using rag cloth, cow dung, and coconut husks during menstrual cycle, courtesy their mothers’ advice.

None of these poor were used to disposing such wastes in dustbins, until these volunteers sensitised them, as there are no dustbins available in their locality even now. In a particular locality, they noticed that the women threw the disposable wastes into the water-canal close by and used the same canal water, moving or stagnant, for bathing and washing utensils. This ground reality propelled the ‘Reachout India’ to draw the attention of the Mysuru City Corporation authorities to think of placing special dustbins in these localities, a task yet to be completed.

Meanwhile, during their walkathon-interfaces with the poor with due regard for maintaining social distancing, the members of this humanitarian mission went on imparting some basic knowledge on how to use and dispose of the used pads.

Dr. Sagarika, who works at Asha Kirana Hospital, says “We are trying to facilitate regular check-ups of women who face health issues related to menstruation. Organising weekly awareness campaigns in which we will tell the women about sustainable menstrual products and safe disposal methods is one of immediate action plans.”

Manasa adds: “We are also working out a plan to introduce a menstrual hygiene manual in schools, particularly government schools in and around Mysore, once schools reopen, to make both young girls and boys be aware of menstrual health,” she said.

We, Mysureans, are happy to know that the Water Supply and Sanitary Collaborative Council (WSSC), whose legal and administrative host is the United Nations Office for Project Services (UNOPS), has also recognised the services of ‘Reachout India’ whose main objective, like that of UNOPS, is that ‘everyone, everywhere, should be able to practise safe sanitation and hygiene with dignity.’

In the course of one of my conversations with the core members of these two outreaches, when I hinted about social recognition for such services rendered, one of the men from these outreaches responded reiterating what Krishna told Arjuna in the Bhagavad Gita: “You are not entitled to the fruits of your actions”. This was the beauty of their voluntarism. Invisibility was preferred as a mark of their integrity.

Yet, we, humans, yearn for recognition. It is natural and necessary in an era of postmodern times where such outreaches done with disinterested devotion are becoming a rare phenomenon. It is time that the Mysuru City and District authorities come forward to identify, recognise and honour such NGOs and the persons behind them.

[Dr. A. S. Dasan, formerly Professor of English, University of Mysore, is the Founder-Director of Shukrodaya Academy for Empowerment Education, Mysuru].