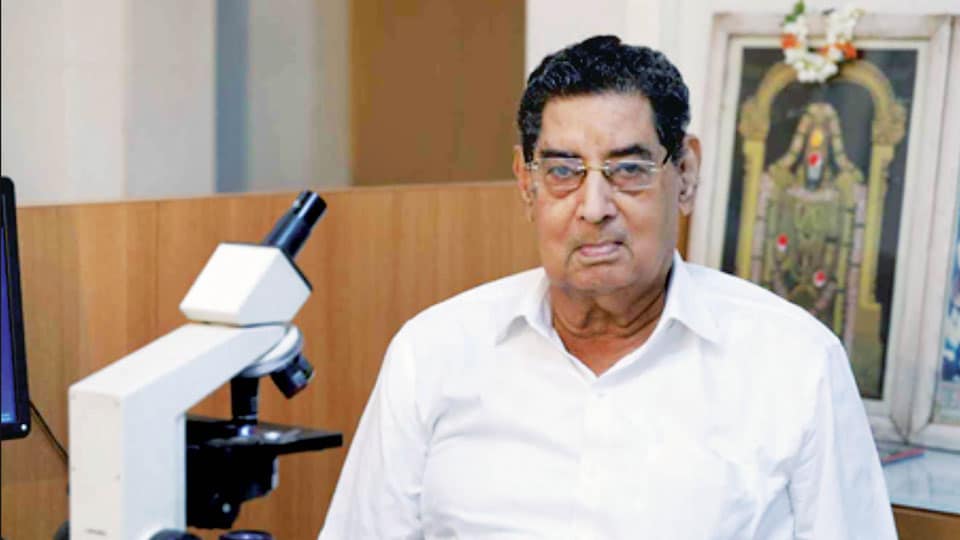 Dr. N. Kannan: A Pioneer and a Perfect Gentleman!

In the recent demise of Dr. N. Kannan on 31st May 2020, we Mysureans have lost an iconic figure and one of the most well-known doctors from our midst. If I may jog people’s memory a little, he was the first person to set up a Pathology Lab in our city, way back in the year 1968, in the Gayathri Bhavan building on Dhanvanthri Road and his tiny lab was called just that — The Pathology Lab !

Born in the year 1936 on the 10th of January, he too was a fighter like the American boxer George Foreman who was also born on 10th January but more than a decade later. But while Foreman fought tenaciously for boxing titles, our hero fought no less valiantly for principles and ethics in the practice of medicine. That is why after a very short but promising stint as a lecturer in Pathology at his Alma Mater the Mysore Medical College, Kannan decided to quit his very secure and sheltered job and ventured to launch himself in a tiny boat on the uncharted seas of running his own lab, guided only by the pole star of his own convictions.

What exactly were the circumstances that led him to take such a seemingly rash and certainly risky decision is something  unknown even to his children. The true gentleman that he was, he preferred to remain silent about this part of his life to refrain from hurting the sentiments of his former colleagues. Surprisingly, I know about them because he used to on some very rare occasions, become sentimental and open up his heart before me and my late father during the many get-togethers we used to have along with a few other very senior doctors of our city in our home over some late night dinners.

My dad and he were very close friends. The most amusing thing that he used to say was that it was the obstacles that others created for him when he was junior pathologist in government service which became the stepping stones to his stupendous success as a leading private pathologist ! I do not wish to lay bare here the details of what went wrong and what went right for him fifty long years ago as it is best if his secrets rest alongside his soul !

But what I can say with a very loud and clear voice is that he was a stickler for outstanding quality when it came to his work. That is why we all saw him sitting bent over his good old microscope and himself drawing the blood of every single patient that came to his lab and writing and signing every single report with his fountain pen, in bright blue ink! Yes, he did that, year after year and even a little painfully too, because of his advancing arthritis which too failed miserably in subduing his indomitable spirit and so decided to leave him to do his work!

It was also because of the pain of this affliction that stayed with him all through his life that he would often ask my mother for a blanket to wrap around his legs if he happened to sit in our garden chatting with my dad on wintry nights. The son of a Sessions Judge at Bangalore, Dr. Kannan graduated from the Mysore Medical College in the year 1960 and went on to complete his Diploma in Clinical Pathology from the Madras University in the year 1963. After his marriage to Romilla from Madras in the year 1962, he settled down at Mysore with his wife and his two sons Lakshman and Praveen Kumar and one daughter Shankari.

The interesting thing is that although theirs is a Tamil speaking household, none of them, except the lady of the house, can read or write their mother tongue because they never studied it as a language in school, including Dr. Kannan himself who was educated in Bangalore! Whenever some of his relatives used to tell him with a sense of disapproval that this was not very right he used to proudly counter them with the argument that since Karnataka was his home State it was enough if he was well – versed in Kannada !

Dr. Kannan shifted his lab from Dhanvanthri Road to Irwin Road in the year 1971 and it stayed there till the year 1989. After his son Lakshman became a Pathologist himself and joined his practice, Dr. Kannan started the Kannan Pathology Lab on Sayyaji Rao Road in the year 1989. When his second son Praveen Kumar became a Radiologist and joined the venture, it became the greatly expanded and upgraded Kannan Diagnostic Centre. Uncompromising attitude towards accuracy made his lab outstandingly successful and a byword for pathology laboratory work not only in Mysore but with a reputation across the entire State.

He was a very strict disciplinarian and his sons say that he always advocated a very frugal lifestyle without any frills and show-offs. For a large part of his life, he drove his good old Ambassador car himself and if you stood anywhere on Irwin Road you could set the time on your watch by his arrival for work every morning. Your best and most expensive watch could err but he would not when it came to keeping time!

READ ALSO  Elections: The Grouse of the Disappointed Urban Elite

Many saw him as a very grim man but only the few very close to him could see the soft heart behind his frown. Money had almost no importance although it came to him unsought. Being very close to him for many years, I knew that he had helped many of his friends and relatives and many strangers too, without their asking, just by sensing their needs, and keeping no records! He would be most willing to waive off the charges completely for any patient who came to his lab with a look of anxiety about how he or she would be able to pay for the tests advised by their doctors.

Let alone giving discounts, he never ever charged a single rupee for the tests that he would do for the hundreds of doctors and their families who went to his lab with their faith and trust. He was famous for this streak of professional courtesy which shone for miles around like a bright guiding beacon. Thankfully, both his sons too turned out to be admirably solid chips of the same old block when it comes to this sterling quality and the high and uncompromising standards of their work.

When I salute their dad for inculcating his best values into them, I also compliment them both for so willingly accepting and upholding them as their guiding spirit. Dr. Kannan trod a path no one had trod in our city till he came on the scene and by facing the storms that he faced with courage and faith he proved that ‘Calm seas never make capable sailors.’

He practiced pathology actively, with great enthusiasm and vigour almost till his demise. Every time we met, he would always tell me with a smile that all he wanted in life was to die with his boots on and he did just that ! His was a life well-lived and the rest his noble soul is getting now is a rest most well-deserved ! He was not only a pioneer in his field but a perfect gentleman too ! May his noble soul rest in eternal peace. Amen !

3 COMMENTS ON THIS POST To “Dr. N. Kannan: A Pioneer and a Perfect Gentleman!”