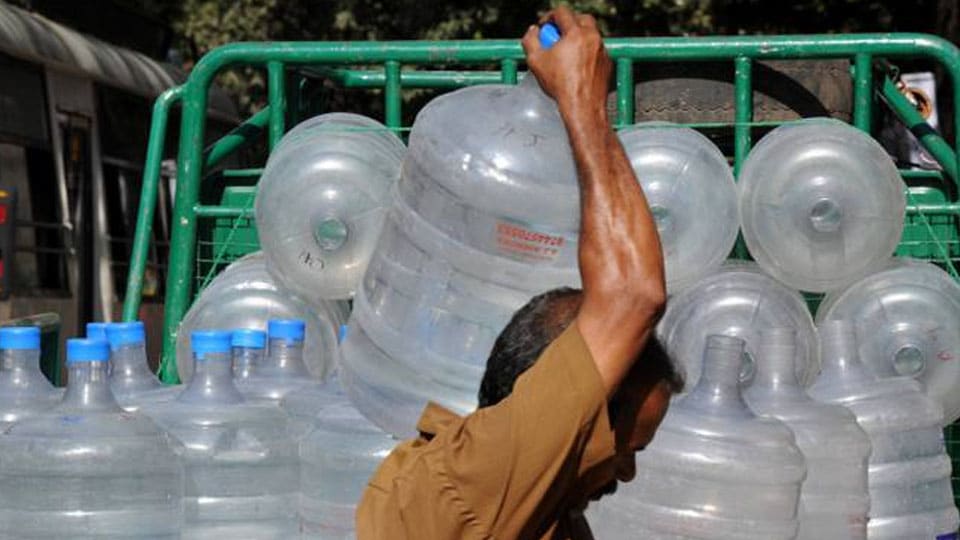 Mysore:  Did you know that the ‘packaged mineral water’ that you buy in shops, restaurants or from roadside vendors or the 20-litre water can that is supplied to your homes may not actually be mineral water?

As more and more urban Indians turn to packaged drinking water, they may also be putting themselves at a greater health risk. A study by Indian Institute of Science (IISc) in Bengaluru has found that most of these bottles have carcinogenic elements which can prove to be deadly. The study results found that plastic bottles, in which water is stored, transported and eventually sold, have chemicals that are harmful to the human body.

A huge demand for packaged drinking water particularly in 20-litre cans has spawned a large number of fraudulent suppliers who are sourcing drinking water from unauthorised sources. Packaged drinking water is obtained from potable water in taps, ground water like borewells, and public drinking water systems such as Municipality supply. It is demineralised and disinfected so it is safe to drink and it also contains minerals that have been added artificially.

The members of the Association will be authorised suppliers of ISI-registered manufacturers approved by the Food Safety and Standards Authority of India (FSSAI).

As per norms, packaged drinking water must be treated with processes like decantation or various types of permitted filtration. The testing for this type of water is more detailed as besides impurities it is tested for contaminants including pesticide residues and heavy metals that are often present in ground water, M. Chandrashekar of the Association said.

But these measures are not followed by most of the packaged water suppliers. Also, the 20-litre cans are not processed at ISI-registered manufacturers. Many suppliers actually fill the empty cans from the water available at Mysuru City Corporation’s Reverse Osmosis (RO) water plants. Shockingly, some suppliers even source water directly from Corporation taps, seal the cans and supply to homes,  he added.

Many of the potable water sources being tapped by companies are poor in quality and unhygienic. In some of the so-called processing plants which claimed to use processes like RO or ultraviolet filtration to purify water, these processes were not working. Such water has several issues like low PH levels, presence of nitrite and e-Coli  bacterial contamination.

Many local companies supply filtered water collected from home-based wells and packed in sealed containers and not really processed or treated water. Though the Bureau of Indian Standards (BIS) has fixed standards for packaged drinking water, most of the companies were selling water without the mandatory BIS certification, Chandrashekhar explained.

After soda companies went out of business, they joined the bandwagon of canned packaged water. They collect water from taps and other sources in cans bearing the ‘ISI mark’ to fool the public. Distributors just pay a paltry amount to obtain water from the MCC’s RO plants and charge up to Rs.80 or 90 per 20-litre can, making 10 times profit, he said.

“Our Association members will furnish their credentials which will help consumers distinguish between fraudulent suppliers and genuine ones,”  Chandrashekhar added.