Home » News » Concor project: No end in sight to impasse 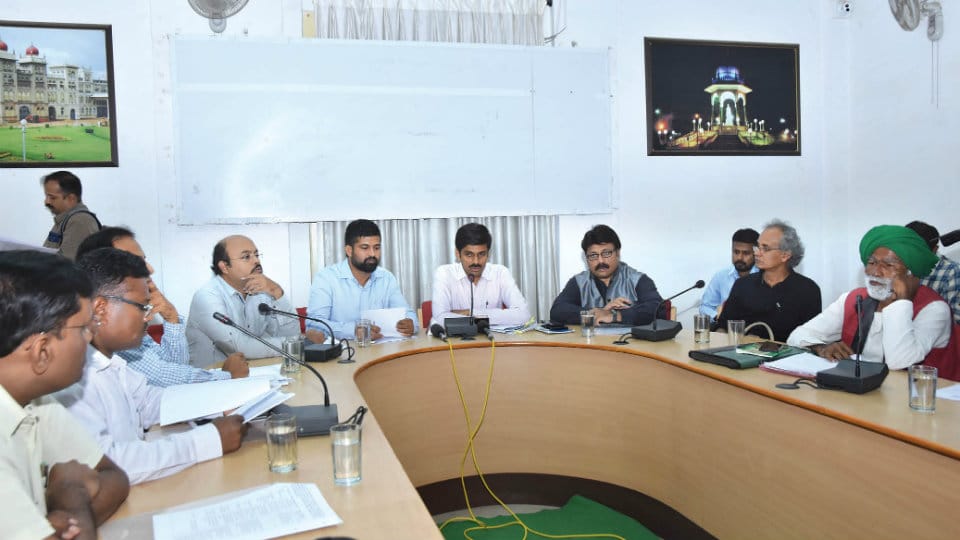 Concor project: No end in sight to impasse

Mysore: The two-hour long meeting convened yesterday at DC Office to resolve the issue over the inland container yard of Container Corporation of India (Concor) at Kadakola near Nanjangud remained inconclusive with some farmers insisting on jobs in Railways and higher compensation for the land they parted with for the Rs. 102-crore project.

The farmers persisted with their demand for a permanent job at the depot for a member of their families while the district administration offered employment in private factories. With neither party willing to compromise, the meeting was brought to a premature end when a large number of disgruntled farmers walked out. This was the fourth such meeting with farmers over the project which is yet to take off as talks with farmers have remained inconclusive.

The District Administration had called for the meeting with the farmers of Nanjangud Taluk’s Tandavapura as Karnataka Industrial Area Development Board (KIADB) had acquired 55 acres of land in Survey Numbers 480-517 in 2011, 2012 and 2013 from 54 farmers. These 55 acres was allotted to Container Corporation of India to set up inland container depots for the Railways.

Deputy Commissioner Abhiram G. Sankar said that the government cannot assure them of jobs in the Railways or CCI as there are many impediments to provide them jobs. However, he assured them that the District Administration would take the responsibility of providing jobs in any of the private companies like ITC, Asian Paints or Pepsi.

The farmers refused to budge from their stand and said that they would agree to part with the lands only if one member in each family was assured of a Government job and not in private companies as there was no job guarantee. Even though MP Pratap Simha and MLA Dr. Yathindra Siddharamaiah tried to pacify them the farmers were adamant in their stand.

The Karnataka Industrial Area Development Board (KIADB) acquired the land and subsequently compensated the farmers. However, monetary compensation alone did not satisfy the farmers, who demanded jobs.

Concor, however, was unwilling to accept the demand citing lack of qualification and technical knowledge among the youngsters in the village to work at the depot. One of the farmers M. Mahadev said that KIADB had acquired huge tracts of land in the area and kept them as land banks. But their lands were all agricultural and irrigated lands. According to the KIADB Act itself such lands cannot be acquired and even the Land Acquisition Act also states this, he said.

“You are telling us that you cannot assure us of a job in the Railways or CCI as there is no provision because many of us are not qualified and apart from this the rules do not mandate to provide jobs for us. But when it comes to acquiring agricultural and irrigated lands you bypass the rules and acquire our lands. Does it mean that there is one rule applicable to us and another to you,” he caustically asked the bureaucrats and elected representatives.

Both Simha and Yathindra made efforts to persuade the farmers to settle the issue since all 54 farmers will get jobs in private sector units in and around Nanjangud since rules do not permit to provide jobs to land losers in Concor. “If we are not offered permanent jobs, we will be forced to move the Court,” Mahadev cautioned.

Farmer Srinivas said after years of effort, Varuna Canal was brought to their area and hence farmers were able to cultivate their lands. Now, they were forced to part with the irrigated lands and even the compensation paid is not adequate. Hence there must be a review to pay them more compensation.

Pratap Simha said, “It is a Rs. 102 crore-worth project and once it is completed, it will help in the overall development of the region. A commercial complex will be constructed, and infrastructure in the area will witness drastic improvement. Consequently, locals will benefit directly and indirectly. In fact, we will sign an agreement with the private factories stipulating that members of farmers’ families provided employment will not be terminated from service pending closure of the company.”

Farmers who are demanding jobs in the Railways do not have the necessary skills or proper educational qualifications and hence they would be given training and provided jobs in any of the private companies in the Nanjangud Industrial area. The demand of the farmers for a revision in compensation cannot also be considered as the lands were acquired between 2011 and 2013, he added.

The DC said whoever has not agreed to the offer will be called again and efforts will be made to convince them. “There is no question of force. The issues will be sorted out amicably,” he added.