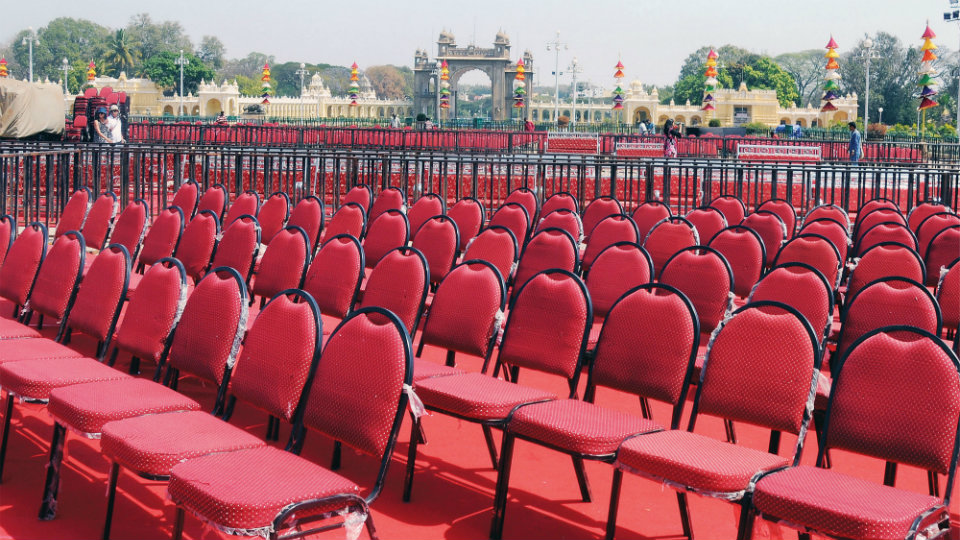 Palace gears up for BIFFes valedictory

With the stretch of Bengaluru-Nilgiri Road between Hardinge Circle (Jayachamarajendra Wadiyar Circle) and Gun House Circle closed for concreting works, the City Police have identified separate entry gates for VVIPs, VIPs, pass holders and visitors to enter the Mysore Palace premises where the valedictory of the 8-day Bengaluru International Film Festival (BIFFes) will be held tomorrow.

The VVIPs and VIPs can enter the Palace premises through Varaha Gate and park their cars at the parking lot on both sides of the Varaha Gate.

Those with passes can park their vehicles in the open space near Karikallu Thotti Gate, opposite the MCC Office and enter the premises through the same Gate where welcome arches have been put up. The general public, who wish to attend the star-studded event should park their vehicles around the identified spots at Kote Anjaneyaswamy Temple and enter the Palace through Balarama Gate located on the northern side of the Palace.

In a bid to avoid untoward incidents, Police have erected barricades all along the route of visitors besides decorating the venue for the gala occasion.

The valedictory of the BIFFes organised by the Department of Information and Public Relations and Karnataka Chalanachitra Academy will be held at the Palace premises from 6.30 pm onwards tomorrow.

Chief Minister Siddharamaiah, who will be the chief guest, will distribute the prizes. This will be followed by a dance feature by Nirupama-Rajendra and troupe and entertainment programmes by cine actors.

The organisers, who have left no stone unturned to make the fest a success, have made seating arrangements for more than 5000 people. The stage, resembling the Hampi Vittala temple famous for its musical pillars, is also being readied.

Public can obtain the free entry passes for BIFFes valedictory from the Office of the Department of Information and Public Relations on Dhanvanthri Road in city between 10.30 am and  5 pm till tomorrow.