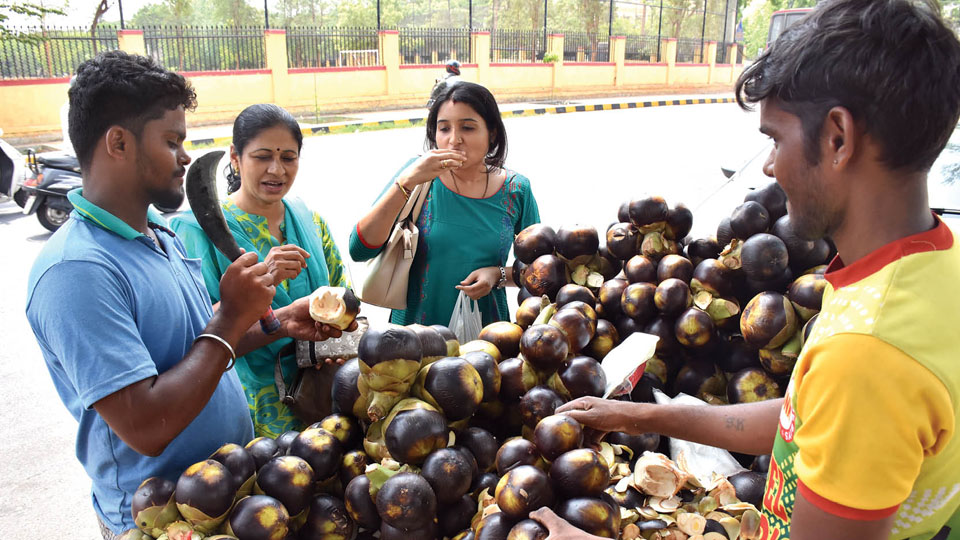 With temperatures soaring and summer at its peak, the streets of Mysuru pave way to fellow Thaati Nungu (also called Thaati Ningu) fruit sellers. This heavenly summer fruit is a revitalising thirst quencher and is a favourite in Southern India, especially the coastal belt, Malnad regions and even city areas.

Borassus flabellifer, commonly known as doub palm, palmyra palm, tala palm, toddy palm, wine palm, or ice apple is native to Indian subcontinent and Southeast Asia. The flesh of the Nungu fruit is similar to litchi in texture and the taste is similar to fresh coconut. Also called a poor man’s rich fruit, this fleshy fruit is a true summer delicacy.

Thaati Nungu is exclusively available during summer season. This seasonal fruit’s inside looks like a translucent jelly which consist of a sweet fluid within it. Cometh every summer, these ice apple sellers come in large numbers to Mysuru generally from Tamil Nadu. Thaati Nungu is a juicy fruit and acts as a natural coolant for the body, which is vital during summer. It keeps the body hydrated and its cooling properties know how to beat the heat.

The actual name of the fruit is Palmyra palm fruit. Each fruit has three sockets and every socket has a watery pulp. This fruit which is rich in iron, vitamin B and calcium helps in weight loss and is also an essential part of the diet during pregnancy.

These fruit sellers from Tamil Nadu have set up several carts at various junctions of the city and quench the thirst of people. Speaking to Star of Mysore, M. Srinivas, who is the head of the group in Mysuru said, “This fruit is extremely famous here and people know its value. That is what brings us here every year. Every summer about 100 people (labourers/ fruit sellers) from Tamil Nadu come to the city to sell this Thaati Nungu fruit. I have my cart put up near Fountain Circle which acts as the main distribution centre to all the other carts in city.”

“The entire supply of fruits is stockpiled here. Daily morning, all of us come here and then they take the fruits and go and sell at their designated locations. I sell this fruit from January to June but the business peaks during summer and thus we require more hands and so more sellers come down to Mysuru between March and June. Most of us belong to the same family and we are cousins, brothers, uncles etc.,” he added.

READ ALSO  A Beautified Street that we can call a home

Among the various edible uses of the tree, the sweet sap tapped from the inflorescence, called Neera, is used for making palm sugar. The petiole fibre and leaf blade are used to make products such as brushes and handicrafts. The tree serves as a source of raw material for several small cottage industries.

Srinivas, who hails from Balur village in Vellore adds, “Once every four days, I head back to Balur and get a new load of fruits in a truck. This fruit is a people’s favourite during summer and Mysuru is like our second home. That is why we love coming back to this place. I have been selling this fruit in Mysuru since the cost of one entire fruit was just Rs.2 way back in 2006. Now it costs Rs.30. It has been a wonderful journey. A lot of people frequent our carts and relish the succulent fruit. This fruit is mainly grown in Vellore and nearby villages and here in Karnataka it is grown in Mangaluru.”

This fruit has a lot of health benefits. It is completely organic and is grown in a natural way. It is good for sugar patients and it regulates body temperature and acts a cooling agent. It quenches thirst and prevents fatigue and dehydration. It also is used in stomach cleansing and it has properties that clear out toxins from the human body. People struggling with stomach aches or digestion issues can consume this fruit.

This pulp is also applied on skins especially on rashes and boils, and it acts as a medication. It is completely natural and there is no chance of any pesticide or growth enhancer being injected into it as it has almost four layers covered above it.

The first is the hard-outer shell, then there is the white foamy layer, then comes the seed sockets, followed by another layer of yellowish-brown fibrous film above the pulp. Even during the Nipah virus in Kerala, this was the only fruit that was allowed to be sold it is fully protected by four layers, Srinivas said.

Karthik, Jayashankar and Srinivas who also collect their supplies from M. Srinivas, have setup their cart near the DC Office. Srinivas says, “I have been coming to Mysuru to sell this fruit since the last 10 years. We all hail from Vellore and we are located at various places in Kalidasa Road, near Akashavani, Vijayanagar, Kuvempunagar and N.R. Mohalla. This fruit is generally grown in the wild and also farms. We are labourers and we just sell this fruit here. The best part of this fruit is that this tree does not need much care and watering. It grows depending on rain water and it is very good for people suffering from kidney ailments and probably the best fruit to consume in blistering summers.”

With a lot of healthy properties on its side and a tasty juicy pulp to beat the heat, Mysureans love this fruit. Shruthi, who was savouring the fruit, said, “It is just like sweet water. Whenever I pass by this fruit pushcart, I make sure to carry some to my home. Though the peeling process is difficult, the struggle and the wait is worth it as the gel inside is an enriching experience. Also, it keeps your stomach full for a long time.”