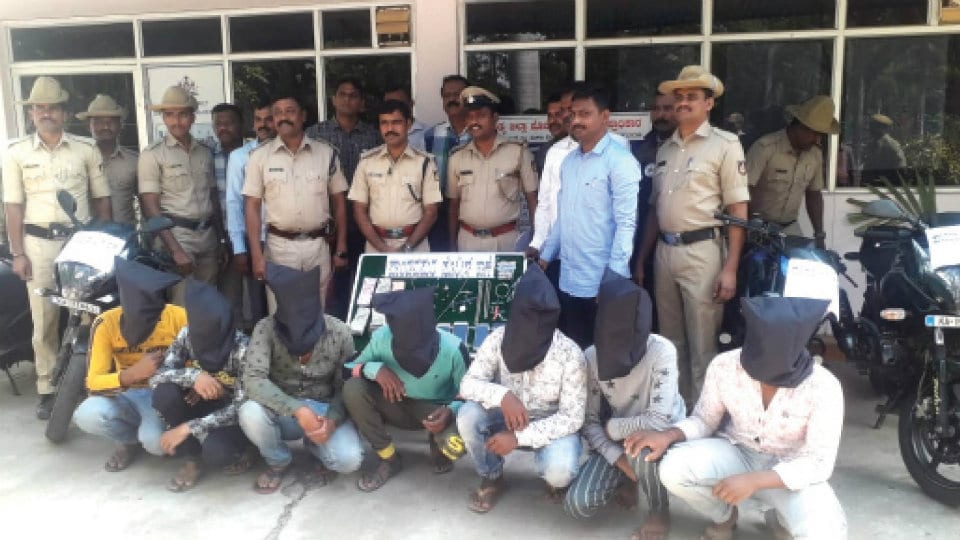 Mandya: Pandavapura Police, who have arrested seven dacoits, have not only recovered Rs.9.26 lakh worth gold jewellery but have also solved six dacoity cases in Pandavapura, Srirangapatna, Saligrama and Hassan’s Gorur Police limits.

Addressing a press meet at his office yesterday, Mandya SP K. Parashuram said that the arrested dacoits have been identified as 24-year-old Krishna, a driver by profession, 19-year-old C.N. Akash, a photographer and 20-year-old C.S. Guru Kiran, all from Chinakurali in Pandavapura taluk, 25-year-old Nawaz, a carpenter from Nehru Nagar in Mysuru, 24-year-old Abid, a car upholstery maker at Azeez Sait Nagar in Mysuru, 20-year-old Rohan, a bar-bender at Kalyangiri in Mysuru and 23-year-old Wasim Hussain, a cook at Ghousianagar in Mysuru.

Giving details, the SP said that on Dec.3 at about 2 am, three masked miscreants, who came to Ahalya Devi Crusher at Bebi Betta in Pandavapura Police limits, threatened the staff with lethal weapons and had made away with Rs.18,000 cash.

On the same day, the miscreants, who barged into Sri Ranganatha Stone Crusher at T.M. Hosur in Srirangapatna Rural Police limits, made away with Rs.4,000 cash and four smartphones belonging to the staff.

On Dec.6, the miscreants, who waylaid one Jambu Johari, Proprietor of Vinayaka Jewellers at Chinakurali near Shambunahalli in Pandavapura, assaulted him and had snatched away gold ornaments and cash, which he was carrying. All the accused were involved in the above cases, the SP stated.

Continuing, the SP said that when Pandavapura Police were investigating the dacoity case that took place at Bebi Betta and going through the CCTV footages of the camera installed there, they noticed that a few days before the dacoity took place, two youths had come to the crusher unit there and were talking to the staff, following which the Police picked up Krishna and Akash and subjected them to interrogation, during which six dacoity cases came to light.

While one committed crimes to repay debts, another to purchase  jewellery for his marriage

One of the accused Krishna, had purchased a Tipper and had not paid the instalments. As the tipper was in the verge of being seized, Krishna somehow wanted to save the tipper from being seized for which he had to pay the money and hence, he along with others, committed the dacoities.

Another accused Nawaz, who was to get married on Dec.14 with a teacher, had no money to purchase jewellery for his marriage and hence committed the crimes. He was arrested on Dec.10 itself and his marriage too broke.