Home » Feature Articles » Paramesh, the Messiah who manages last rites of your loved ones 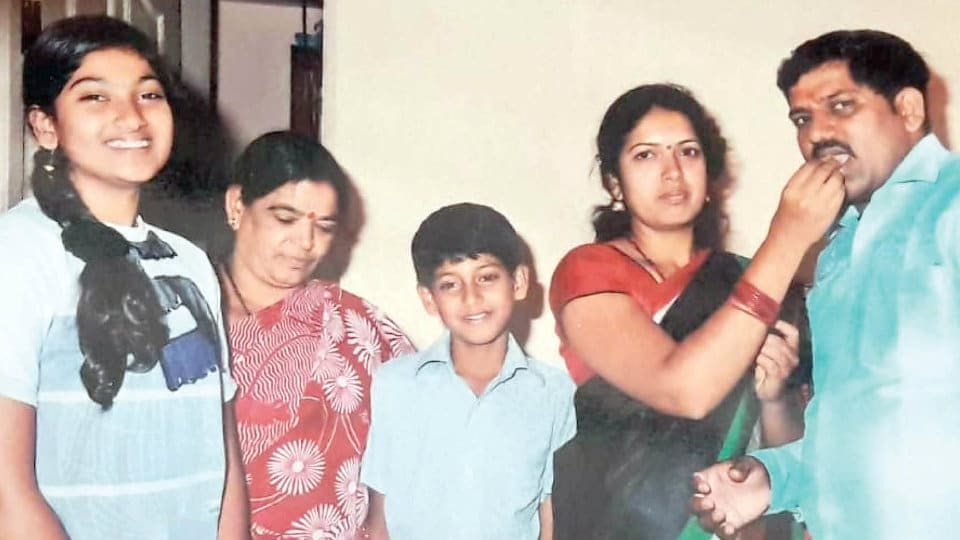 Paramesh, the Messiah who manages last rites of your loved ones

Do you need a helping hand to manage the last rites of your loved ones? Every relative gives different suggestions about rituals, which leaves your family confused at the hour of grief. Don’t worry, give a call to Paramesh, the messiah of our city — he will arrive within minutes and make all arrangements for the last rites according to your customs and rituals.

Whenever someone dies in and around T.K. Layout, 42-year-old Paramesh, a devotee of Lord Shiva, will get a call and he joins them in performing the last rites of their loved ones after discussing the funeral arrangements with the bereaved family members.

Since the very beginning of human civilisation, in almost every culture and society that has existed, human beings have had rituals to deal with death. From dressing the body to burying, immersing ashes after cremation to sending reminders, Paramesh will be there to help the shattered families.  He will oversee the entire day’s schedule from bringing the body home from the hospital, taking the body to the crematorium, burying the body at burial grounds after washing or giving sacred bath till the last rites are performed and arranging for the Death Certificate.

Paramesh handles everything including ambulance to take the body to the crematorium, arranging materials such as flowers, cloth, rose water etc., required for the funeral, assisting the family while performing the last rites. As beliefs about cleanliness and the relationship between body and mind are reflected in funerary practices, Paramesh will perform last rites according to the customs and traditions of the people.

So far Paramesh has performed last rites of various deceased persons at T.K Layout, Ramakrishnanagar, Sharadadevinagar, Bogadi and other adjoining places.  Apart from supporting and consoling, he will help the bereaved family members in the 3rd and 11th day ceremonies, Halu – Thuppa, collection of ashes and immersing ashes into rivers through to final days of the rituals.

Paramesh is always ready to offer his help and visit any part of the city whenever someone gives him a call seeking his presence.  He says that he has attended more than two funeral rites in a week, sometimes two in a day and sometimes he doesn’t get any calls for a fortnight. “However, I am always ready to help at whatever time people approach me,” he adds.

He says that his friend Ravi always accompanies him and gives his support in all funeral rituals. “I chose this service on humanitarian and compassionate grounds at the age of 16 when many people were not coming forward to touch the corpse. Getting efficient staff for this kind of job is a challenge as certain taboo is attached to this. I decided to dedicate myself in this service while realising that how important it is for people to depart from the world respectfully when I was working as a Ward Boy at JSS Hospital and the last rites hold a lot of value,” the messiah adds.

Paramesh’s wife works doing some small jobs. His daughter is studying engineering and  son is in first year PUC. And all of them are encouraging and co-operating with him in his service.

No wonder, Ward No. 43 Corporator Gopi has recognised his service and entrusted him with the responsibility of overseeing the disposal of solid waste management in his Ward to eke out  his livelihood.

Narrating his family background, Paramesh says that he could not study much because of poverty. His father who had seven children was unable to provide education to all.

Before taking up this profession, Paramesh was doing some odd jobs since the age of 10  years. His first job was as a Ball Boy at Mysore Tennis Club.

“I quit this job after working for 3 years there. I worked as a construction worker for 10 years. Later, I was running a goods auto to eke out my living, but I did not to continue because I was not qualified to get a driving licence as passing 8th standard was necessary to get the same.  Finally, I ended up as a Ward Boy at JSS Hospital. I quit this job too after new JSS Hospital opened and now, I have fully involved in this service and finding satisfaction in it,” sighs Paramesh, who has even displayed his Mobile No. 99018-45730 in the burial grounds  (crematorium) for people in need to contact him.

Me and my children are all happy and healthy because of the sacred service offered by my husband. I have even sent my husband at midnight to help people in need. He has been never after money.”— Renuka Kumari, Paramesh’s wife

“I had never heard about Paramesh, but he came and helped out our family for last rites of my father and consoled us.” — Vidya, Janathanagar

“God has not given me enough money, but he has bestowed me with enough compassion and empathy to help people and shattered families who lose their loved ones. I deem this service as a sacred act. I have also arranged money for poor families whenever they didn’t have enough to perform the last rites of their family members by taking the help of generous rich persons.” — Paramesh

Mysuru Paramesh T.K. Layout
Heart of the matter Emotion stumps action
We need to get our India back

ONE COMMENT ON THIS POST To “Paramesh, the Messiah who manages last rites of your loved ones”