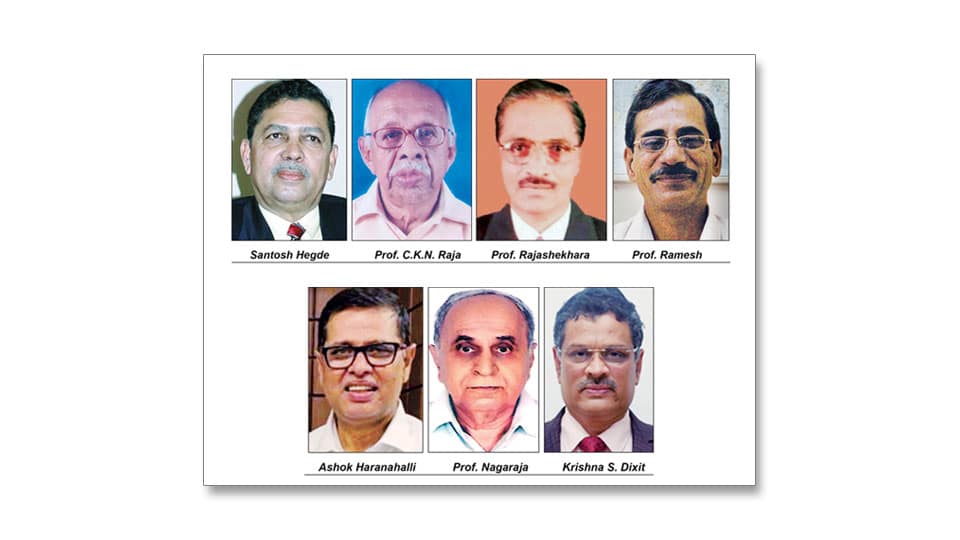 Parampare to host lecture series on Indian Constitution from Nov.18

Parampare, the cultural organisation of Mysuru has organised a series of lectures on various aspects of the Constitution of India from Nov.18 to 24 at Mysore K. Vasudevacharya Bhavana (Sri Nadabrahma Sangeetha Sabha) on JLB Road in city everyday from 6 to 8 pm.

Eminent scholars in the field of Law and eminent Judges of High Court and Supreme Court will be addressing the gathering.

The Constitution of India was adopted on Nov.26, 1949 and it was enforced from Jan.26, 1950, in order to celebrate the 20th anniversary of Purna Swaraj resolution which was passed unanimously at the All India Congress Committee at Lahore on Jan.26, 1930.

India is a multi-lingual, multi-racial, multi-cultural, multi-religious country with abundant diversity bringing forth along with it multifold Constitutional problems and challenges. The Supreme court of the country has over the last seventy years done a magnificent job in balancing conflicting interests within the framework of the Indian Constitution.

Constitution of India is not just a political document. It is the highest law of the country. No Law made by the Central or State Legislature can contraven the basic structure of our magnificent Constitution. The people of India are now gradually developing a respect for the Indian Constitution. No doubt conflicts have arisen between the three organs of the Government namely Judiciary, Executive and the Legislature. Equally there has been a confrontation between the State Government and the Union Government.

READ ALSO  ‘PRABHULINGALEELE’: A unique Vaachana-Vyaakhyaana by ‘Parampare’ from May 13

We have a tendency to grumble that our Constitution has not been able to tackle several issues comparing it with Constitutions of England, France and United States of America. But we forget that England has a Constitutional experience of 600 years, France over 200 years and the USA over 200 years. We in India have to wait to develop such type of Constitutional culture. It is definite that in about 200 years, India will be the strongest democracy of the world and Indian Constitution will be a model Constitution.

To create awareness about Constitutional knowledge among the younger generation and public, Parampare has organised these scholarly lectures under the able guidance of                                              Prof. C.K.N. Raja. It is a rare opportunity for  public to listen to University Professors and eminent Judges of High Court and Supreme court. Of course, the lectures are being conducted in Kannada. There will be an interaction at the end of each lecture. Patriotic songs are being presented at the beginning of each session. The programme details are as fallows:

Nov.18: Gracious presence of Suttur Seer Sri Shivarathri Deshikendra Swamiji. Justice N. Santosh Hegde, retired Judge of Supreme Court and former Lokayukta of Karnataka, will deliver the inaugural lecture. He has been a model icon for our youngsters for his talks on humanity contentment (trupti).

Nov.19: Prof. C.K.N. Raja, retired Professor of Law from University of Mysore (UoM), will deliver lecture on ‘Making of the Indian Constitution.’

Prof. Raja even now at the ripe age of 88 years, is teaching Constitution to students of various Law Colleges. He is national Professor Emeritus. When Indian Constitution was adopted, he was travelling to several villages in Uttara Kannada to bring awareness to rural public. He has published many books and research papers on the subject. He is also known for his humorous articles in Kannada.

Nov.21: Prof. M.K. Ramesh, a senior Professor from National Law School of India University at Bengaluru, will deliver a lecture on ‘Separation of Powers & Relationship between Legislature, Executive and Judiciary.’

He has 38 years of teaching experience and has served as Vice-Chancellor of National Law School of India University (NLSIU) for a brief period. He is a  expert law advisor to Karnataka Government on many issues. He is also a member of many International Law Committees.

Ashok Haranahalli is the son of freedom fighter and former Minister of Law and Parlimetary Affairs, late Haranahalli Ramaswamy. He has been practicing before the High Court of Karnataka for more than 30 years. He was teaching law in Renukacharya College. Recipient of Aryabhata Award, Kempegowda award and also recognised as Best Advocate General by Bar Association of India.

Prof. Nagaraja has teaching experience of 45 years. He was with UoM till 2001. He has published many research papers. International Law and Human Rights are his fields of specialisation.

Nov.24: Justice Krishna S. Dixit, sitting Judge of High Court of Karnataka, will deliver a lecture on ‘Classic Judgements of the Supreme Court.’

Justice Dixit has taught Jurisprudence for three years. He has practiced before Karnataka and Madras High Courts. He has been Standing Counsel for Central Government and also various agencies like Election Commission, UGC, Telecom Regulatory Authority, Bhabha Atomic Research Centre (BARC). He was also Assistant Solicitor General of India. He assumed the office of Judge of Karnataka High Court on 14-2-2018.