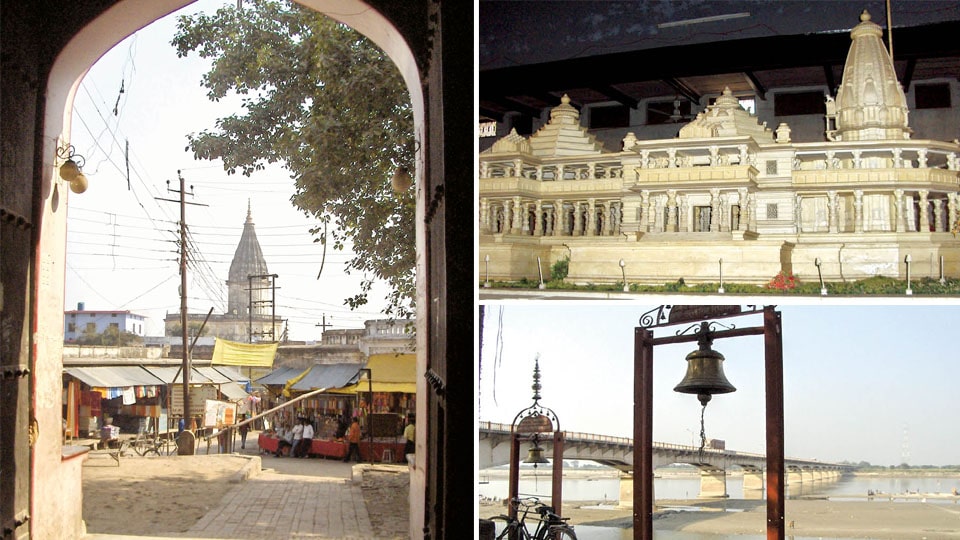 Recalling visit to Ayodhya, 13 years ago

The historic Supreme Court verdict on the Ram Janmabhoomi- Babri Masjid site took me back to the day when I visited Ayodhya nearly 13 years ago. The opportunity of visiting this historic city came to me when I was invited to attend a three-day national seminar on consumer issues at Hotel Taj in Lucknow. Making Lucknow my base, I undertook a week-long tour of the prominent places of interest after the conference and Ayodhya was on top priority among them. Ayodhya was just about 140 kms from Lucknow.

There were three chief reasons for making the temple town a must during my visit to Lucknow. One, the Babri Masjid had been demolished on Dec. 6, 1992 resulting in large scale violence in the country which cost the lives of over 2,000 people. Second, my wife had taken part in that rally as a ‘Kar Sevak’ on that day. She was an eye-witness to the demolition of the Babri Masjid by thousands of Kar Sevaks who had gathered there from across the country.

While she and her team members from Mysuru had left the place soon after the demolition to a safer destination, she was eager to see how the place looked after the demolition as she had no opportunity to stay back to see the disputed place. And the third was a well-known epigraphist-friend of mine, who was among the experts who had inspected the excavated portions of the site on behalf of the Archaeological Survey of India (ASI), as per the directions of the Court in 2003, had told me about what he had seen there. Therefore, when I had the opportunity of staying in Lucknow, I did not want to miss the famous Pouranic site to myself see Ayodhya after the demolition of the disputed structure.

Ayodhya is the administrative headquarters of Faizabad district in Uttar Pradesh. The city is identified with the Pouranic city of Ayodhya of Ramayana and hence considered as the birthplace of Lord Rama, Owing to this belief, it is considered as one of the most important pilgrimage centres in the country. It is stated to be the capital of the ancient Kosala kingdom mentioned in the Ramayana. It is also mentioned in many ancient texts, including the Mahabharata. Close-by flows the sacred Sarayu River which is one of the tributaries of Ganga.

My one-day trip to Ayodhya was on December 21, 2006. This ancient site has a number of attractions to offer, mostly associated with the legend of Sri Rama. The Hanuman Temple inside the massive four-sided Hanuman Garhi Fort is a must for all pilgrims as they believe that this humble servant of Lord Rama fulfils their wishes.

Ramkot is the main place of worship in Ayodhya. The Ram Navami celebrated here is very famous and draws devotees in large numbers. Treta ke Thakur is a temple standing at the site of Ashwamedha Yagna conducted by Rama. Nageshwarnath Temple is said to have been established by Kusha, son of Rama. Several others added to these three major temples are the Babri Masjid site, the work-place where the workers are engaged in carving stone pillars and carvings for the proposed temple of Rama, and the sacred Sarayu River.

We visited a couple of places, whatever we could do during our one-day trip, but our first priority was the site of Babri Masjid, said to have been constructed by Moghul King Babur in 1528.

After a quick breakfast of Khachori and tea at a road-side tea shop sitting on a bench, we went to see the Babri Masjid demolition site. As we approached the place, there were men drawn from security forces all around and thorough checking at a couple points. They dotted the by-lanes and roads maintaining a tight vigil. Except these security personnel and people who were either going to the demolition site or returning from there, there were none else from the entry point onwards.

Some distance away alone the security men asked us to keep the camera I carried as no photography was allowed beyond that place, the purse and the bag my wife had in her hands in the safety counters, where stood a few security men. As we proceeded further with anxiety and curiosity, we were body-checked at two or three places before we reached the entrance under a covered area. As we entered inside we saw a priest seated with a plate after having worshiped at the Ram Janmabhoomi. He offered us a flower.  Behind him, we could see the debris of the demolished structure in heaps.

After receiving the sacred flower from the priest, we moved slowly one behind the other in the barricaded path speaking in hushed tones. As we moved we took a peep into the dug up places to our right, as the security men kept guard. The pits were dug up a few feet down and underneath we could see a few standing and collapsed pillars with floral designs on them, foundation structures of burnt bricks, and some carved stones of an ancient temple. While the guards kept asking us not to stand for long, we came out from the exit place to breath fresh air. That was indeed an unforgettable experience.

We had to walk back to the taxi we had hired by a circuitous road. As we passed, we saw many security men keeping a watch of the area. I ventured to speak to one of them, who frankly remarked, how he wished the dispute was resolved soon, so that he and his colleagues could return to their homes. The security, he further remarked regretfully, was costing the public a crore of rupees a day and wondered what purpose it served. I agreed with him and expressing my desire too that the issue was resolved for the good of all at the earliest, a decision which had to wait another decade.

Existence of a temple

After seeing the demolished area and its dug up places, I remembered what my epigraphist-friend had narrated to me earlier in Mysuru during our prolonged talk, taking me to confidence that I would not write about it. While recalling the study he had undertaken along with others, what he had seen inside, he said, were the structures of a temple.

This indicated that there existed an ancient temple underneath the demolished structure. However, they were not certain whether it was of the temple of Rama. After their studies, including epigraphic evidences, they had submitted a sealed report to the Supreme Court. This is one of the major factors the highest court of the country has considered before delivering its judgment resolving the 150-year-old dispute.