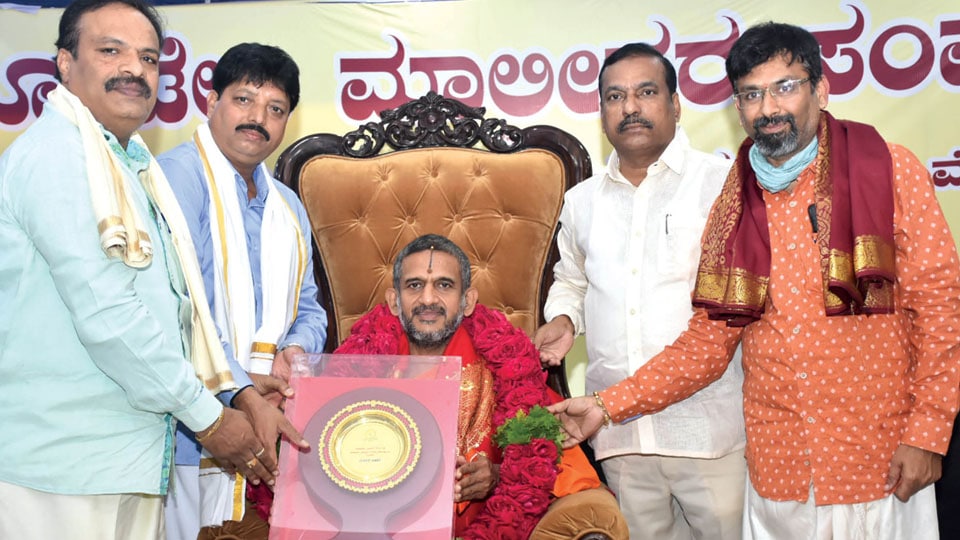 Speaking after being felicitated, Vishwaprasanna Theertha Swamiji said that late Pejawar Seer Sri Vishwesha Theertha Swamiji had strived hard for  constructing the Ram Mandir at Ayodhya and  as such he should be credited for it.

Pointing out that the Government has handed over Ram Mandir site to Ramjanmabhoomi  Trust, he said that the site not only belongs to the Trust, but to all Ram bhakts  of the country as well.

Declaring that a special 45-day campaign on Ram Mandir construction will be launched at Ayodhya from Jan. 15, he said that the cost of construction of Ram Temple at the site is estimated at about Rs. 500 crore, while another Rs. 1,000 crore is needed for development of the surrounding environs. He appealed everyone to donate as per their capacity  for construction of Ram Mandir.

Referring to establishment of Goshalas, he said that cows are as sacred as our mothers and hence should not be sent to slaughter houses.

Pointing out that it is important to set up Goshalas here and there for cattle care, he appealed the people to donate liberally for the cause. He also suggested the hotel owners to set up Go-Hundis (offering box for cattle care) in their hotels so that customers can contribute. State BJP Vice-President M. Rajendra, Hotel Owners Association President C. Narayanagowda, Hoteliers Charitable Trust President Ravi Shastri, SubramanyaTantri and others were present.