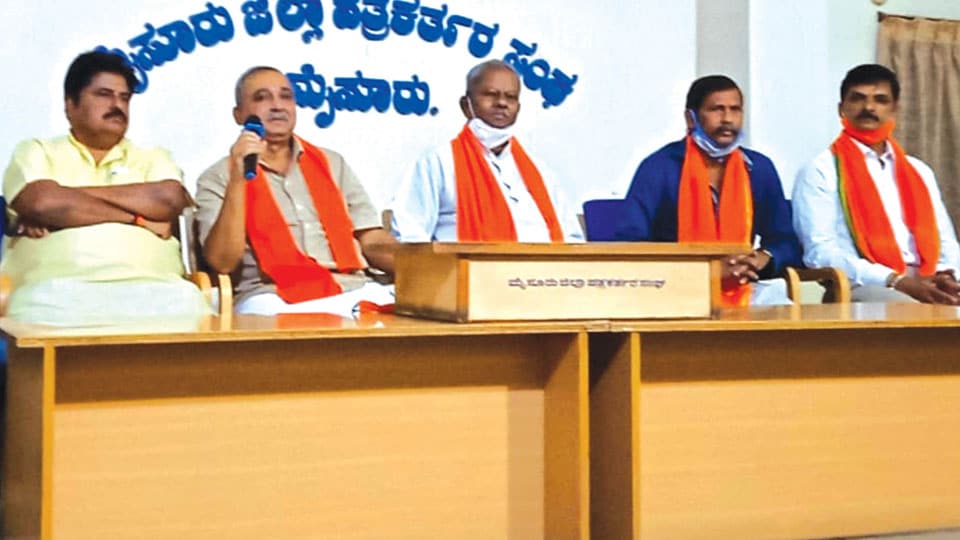 Ram Mandir fund collection drive across the country from Jan.15

Addressing a press meet at Patrakarthara Bhavan here on Thursday, Basavaraj said that  in Karnataka, the drive will take place from Jan. 15 to Feb. 5. Pointing out that 11 crore houses of Hindus across the country  will be visited during the drive for fund collection, he said that in Karnataka, there were 1.30  crore houses of Hindus and it has been targeted to visit more than  90 lakhs of them.

Noting that fund collection campaign will be carried out in  4 lakh villages of the country, including 27,500 in Karnataka, he said that 28,000 teams, each having five members, have been formed for the purpose.

Stating that printed coupons will be issued for donations of Rs. 10, Rs. 100 and Rs. 1,000, Basavaraj said that those donating Rs. 2,000 or more will be issued receipts and such big donations will be exempted from Income Tax under Section 80G of IT Act. Donations collected will be credited to the Bank account of TeerthKshetra Trust and transparency will be maintained in all transactions, he maintained.

He further said that the VHP will accept donations from all communities, religions and all political parties and already, about four Muslim community members from Bengaluru have donated funds.

Pointing out that Roorkee-based CBRI (Central Building Research Institute) and Larsen and Toubro (L&T) are engaged in preparing the blue print for the foundation of Ram Mandir at Ayodhya, he said that engineers from Tata Consultancy Services are working on the construction with technical expertise provided by IITs at Mumbai, Delhi, Chennai and Guwahati.

Noting that Ram Mandir will be coming up in an area of 54,000 square feet, he said that the Mandir will be 360 ft. in length and 235 ft. in width, with 3 floors and 5 mantaps. The structure will be supported by 160 pillars on ground floor, 132 in first floor and 74 in second floor and the idol of Ram Lalla is expected to be consecrated in 2024, he said. The Mandir complex will also house an international standard library, museum, research centre, yagnashala, Veda School, SatsangBhavan, an amphitheatre, Dharamshala and such other facilities, Basavaraj added.

RSS has no connection with Yuvaraj

RSS South Karnataka Region Executive member M. Venkatram, who also addressed, said that RSS (RashtriyaSwayamsevakSangh) had no links with Yuvaraj of Bengaluru, who has been arrested by the  Bengaluru CCB Police in connection with cheating of several persons to the tune of crores of rupees. Alleging that it was a ploy by some persons to link Yuvaraj with RSS, he appealed the public not to fall prey to such persons.

Asserting that Ram Mandir fund collection drive has received good response, Venkatram said that veteran writer and SaraswathiSamman awardee Dr. S.L. Bhyrappa donated Rs. 10,000 when he launched the fund collection campaign office at Madhava Krupa a couple of days ago. Also, it is delightful to note that a physically challenged boy donated his small savings for Ram Mandir construction, he added.