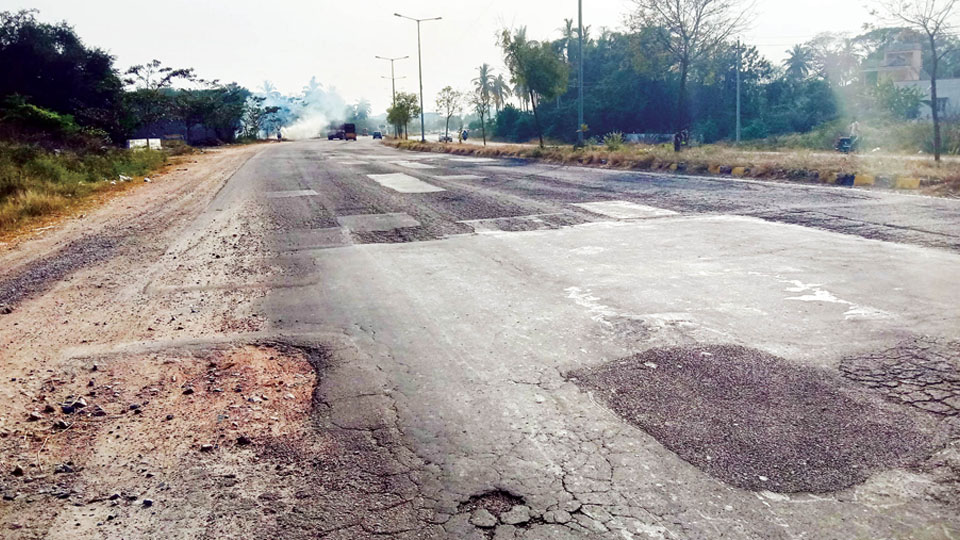 Mysore/Mysuru: The connecting roads to the Ring Road from Kalidasa Road in Vontikoppal and from Trinetra Circle in Gokulam are filled with potholes. Though MLA L. Nagendra performed guddali puja for the commencement of road works months ago, the same is yet to be taken up.

With the weather changing day-by-day, is it possible to lay good quality road if the road works are taken up during monsoon? is the question posed by the residents of Vontikoppal and Gokulam.

To lay new pipes, Kalidasa Road was dug up and the trench has been covered with jelly stones, which has scattered on the road. Also, the road has been cut at many places unscientifically to take water connections, thus spoiling the condition of the road. This has resulted in motorists coming from Vijayanagar 1st Stage side taking a right turn near Chandrakala Hospital and proceed via Hunsur Road.

Another major problem is the manholes which are projecting above the road. With jelly stones scattered on the road, motorists are bound to suffer serious injuries if they fall after losing control of their vehicles.

After laying pipes, the trench should be covered with dug up mud, cover it with jelly stones and then asphalted. Don’t the authorities have knowledge about it? angered residents questioned.

Meanwhile, residents said that the connecting road from Trinetra Circle to the Ring Road is filled with potholes. Also, some people have dug up the roads to get water connections to their respective houses and have filled the dug up portions with mud; Now, vehicles plying on this road spew dust, causing health hazards. They alleged that though the works to lay pipes from Vijayanagar Water Tank to Abhishek Circle has been completed many months ago, the road has not been completed and demanded the road be asphalted immediately.

Apart from the above, the road from ISKCON in Jayanagar to Ashokapuram, Udayagiri Main Road, from MyMUL in Siddarthanagar to Nazarbad Police Station are among other roads in city which are in bad shape causing a lot of inconvenience to motorists.

Trench was dug up to lay new pipes on Kalidasa Road and has been covered with jelly stones. But, when vehicles move over the covered portion,     jelly stones are getting scattered on the road and sometimes fly and hit people and vehicles, causing injuries and damages. Action should be taken soon to asphalt the dug up portion. —Govindaraju, Vontikoppal resident

The connecting road from Trinetra Circle to the Ring Road has not been asphalted since 10 years. Only potholes are filled and patched up, which do not last even four months. There is lack of proper drainage facility and whenever it rains, the water gets stagnant on the road worsening it further. MLA L. Nagendra performed guddali puja to launch the road works three months ago, but the works have not begun. —Nagaraju, Gokulam resident