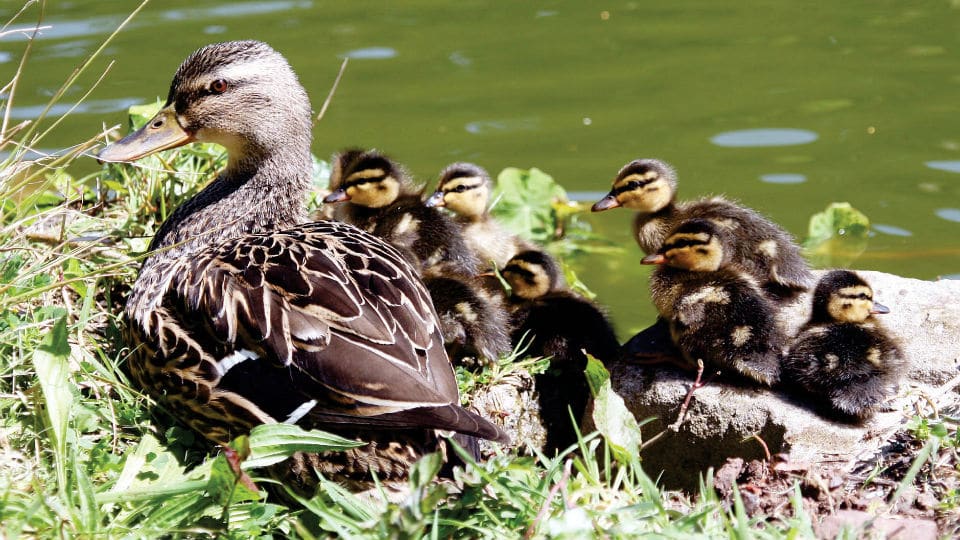 In this week’s Pet Talk, Maneka explains about nesting habits in ducks, how sonar can affect marine mammals and what can be done to make baths tolerable for a dog.

How do reflective belts for dogs / cows help?

Reflective belts make the animal visible at night and saves them from being run over by vehicles, or being hit by motorists, as they can see the belts from far and avoid running into the animals. Reflective belts are also indicative of the fact that someone is looking after them and they belong to someone.

Are animal fairs where animals are traded, legal?

Animal fairs were originally started to facilitate farmers to buy cows and buffaloes or camels. Over the years they have turned into criminal conglomerations which are only frequented by butchers. These people pretend to be agriculturists and usually either have fake certificates made — even though they are entirely landless — or they bribe the local mela adhikari to give them a clean chit. The law says that no one can buy more than two cattle. But these people come in groups and families and each person buys two each. The law is that no animals can be loaded onto trucks. But either they are bold enough to surround the area with trucks, or they walk the animals down for about half a kilometre and then load them into trucks and take them to slaughterhouses. The Supreme Court had ordered the Government to make strict cattle rules by 2016 October. The Government has still not done so.

What are the powers that a Police Officer can exercise when he sees cruelty against animals?

There is a madari/ snake charmer in my locality, is that legal?

Possession of animals such as snakes, langurs or monkey is prohibited under the Wildlife Protection Act, 1972. Snakes cannot be kept by people for trading or entertainment purposes, as it is an illegal activity. Snake charming has been banned since 1991.

Where do ducks lay their eggs? Do they build  a nest?

Yes, Ducks do make nests. They mostly nest on the ground on dry land that is close to water; nests are generally concealed under overhanging grass or other vegetation. Ducks are often categorised as upland nesters, overwater nesters, or cavity nesters.

Overwater nesters: They make their nests on floating mats of vegetation like bulrush. Their preferred nesting sites are semi-permanent wetlands with relatively deep water and dense stands of vegetation.

Cavity nesters: Nesting cavities are often made in trees by the excavations of woodpeckers or are created by decay caused by old age or damage from wind    or lightning.

How does oil spill harm animals and plants in marine environments?

Oil spills affect animals and plants in two ways:   from the oil itself and from the response or clean-up operations.

* Spilled oil can harm living things because its chemical constituents are poisonous. This can affect organisms both from internal exposure to oil through ingestion or inhalation and from external exposure through skin and eye irritation.

* Oil can smother some small species of fish or invertebrates and coat feathers and fur, reducing birds’ and mammals’ ability to maintain their body temperatures.

* Since most oils float, the creatures most affected by oil are animals like sea otters and sea-birds that are found on the sea surface or on shorelines. They can easily be harmed by oil, since their ability to stay warm depends on their fur remaining clean.

* Some light oils, such as gasoline and diesel, can ignite and explode. They can kill animals or plants that they touch, and they also are dangerous to humans who breathe their fumes or get them on their skin.

* Some heavy oils can result in chronic health diseases like tumours, cancer etc.

Underwater sonar can lead to injury or even death, in the case of many whales, dolphins and other marine life. The rolling sound waves are around 235 decibels and travel for hundreds of miles under water. Whales are tortured by the intensity of these signals, due to which whales flee, rising to the surface at a rapid rate. Marine mammals accumulate nitrogen in their blood when deep underwater and they are required to exhale it while surfacing. However, whales may neglect to do so because of the speed at which they rise. Instead of dissipating, the nitrogen gas forms bubbles that erupt and cause serious damage to vital organs. As a result, the whales wind up on beaches, where they die.

What is coral bleaching and why is it bad for humans?

Corals are millions of living creatures. When they are hurt by changes in temperature, light, or pollutants, they expel the algae living in their tissues, causing them to turn completely white.

What should one do if a dog does not enjoy baths?

There are many ways in which the dog owner can help make baths tolerable for the dog and for himself.

Nice long walk: Taking your dog for a walk right before a bath will make him hot and tired and, therefore, he will naturally enjoy a dip in water. Also, your dog will have less pent-up energy to fight the process of bathing.

Classical conditioning: The first step in making a dog comfortable is by making him aware it’s bath time by using certain cues, such as “bath.” By associating a certain word or phrase with bath, you help in preparing the dog that bath is coming. The dog becomes relaxed simply by alleviating the fear of the unknown.

Make it fun!: Bath time should be paired with some fun activities or food. You can persuade your dog into showering by offering him food every time he stays calm in the bath tub. You can also give him a long lasting toy or chew after his bath.

Don’t douse your dog with running water as it might scare your dog. Instead, use a washcloth to wash your dog’s face as it is less frightening than running water. Also, you should use bucket and mug or pitcher in place of a pipe to make bathing experience less fear-provoking.

Check Temperature and Tubs: Some dogs are super sensitive to heat, and that includes water and blow dryer. Therefore, it is essential to check the temperature of the water and keep it lukewarm. Further, remove the slipperiness of tubs and sinks, as many dogs have trouble standing in them, which further adds to the stress.

Bring a positive attitude: If your dog is resisting a bath time and again, it’s most likely that you’re conveying ‘what an ordeal this is going to be’ with your body language and energy to your dog. A positive approach, with calm and assertive energy, can bring a huge change.